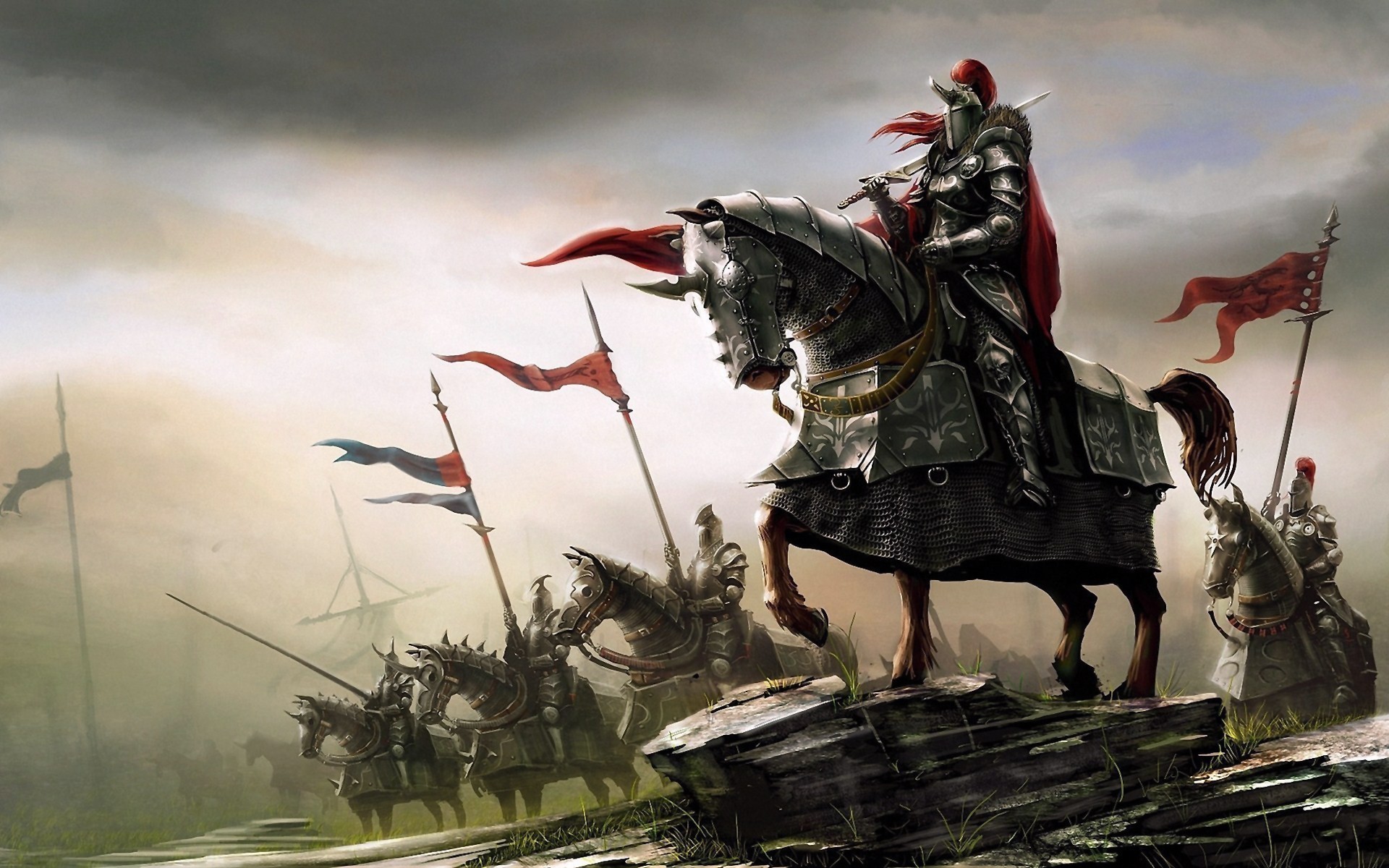 With all these character classes popping up, I felt the need to examine whether class features could determine level progressions. So far, a seat-of-the-pants “guesstimation” has been my method. That’s less than ideal. What if the main features of a character class could be rated with numbers, and added up? This would provide a more precise and consistent method of assigning base xp requirements to all character classes across the board. This may be a mere glint in a designer’s eyes.
Art Credit: Unknown Author or Copyright

While researching the subject, work on exactly the same topic came up in Erin Smale’s fine article Building the Perfect Class. Erin’s system dealt specifically and in great detail with classic BECMI/RC character classes. I wrote my own version, achieving approximately the same results: emulating level progression tables from the classic rules sets. While seeking answers about the origins of the numbers used in official tables, I found they seemed to be based on a combination of educated guesses and subjective empiricism. I don’t mean this as criticism, since I enjoy the game as designed. Nonetheless, as a consequence of emulating official tables, math-based mechanics inevitably manipulate values assigned to character class components, which makes them as arbitrary as their source.

If the end goal is only to emulate official tables, then fine, this matter is settled. On the other side of this coin, however, lies the annoying question: who’s to say that a thief’s 1,200 XP really is a fair amount to reach level 2, compared with a magic-user’s 2,500, or an elf’s 4,000? What logical method is there to decide whether 1,200, 2,500, or 4,000 are too little or too much for their respective class features? This is a thorny issue because rational and consistent calculations involve comparing asymmetrical class components and attributing fair numerical values to each of them. This leads to challenging questions like these: is a d8 base HD more relevant than fighting as a fighter, or than having better saving throws, or than having access to spells? One might assume that being able to cast the full range of magic-user spells is more valuable than cleric spells, but then by what measure—50% more, 100% more, 200% more? How does turning undead compare with backstabbing? How much of this reasoning reflects personal bias vs. objectivity? Assigning values to class components can be subjective if not entirely arbitrary. Thus the conundrum.

Departing from official-but-somewhat-artificial tables, a more-logical system may yield substantially different results. If so, the game may be altered beyond what most fans feel is desirable or practical. What if calculations indicate, for example, that features of a cleric’s character class are more “valuable” than a fighter’s? Out of fairness and logic therefore, experience points clerics need to level up ought to be higher than those of fighters. Or is it that in response to the fighter being more popular, deliberately lowering the cleric’s xp scheme encourages players to pick this latter class instead? Would players and DMs be willing to accept far-reaching changes? Are they worth altering the game? Maybe. Maybe not. It’s worth a look though, at least out of curiosity. The point of this is to ensure all character classes are run through the same process with the understanding that if imperfect, it is at least consistent.

Perhaps the simplest approach is a walk through the Excel document I created. Always “allow editing” if the notice comes up to make sure you can alter cell contents and to enable the drop-down menus. To maximize your screen "real estate," collapse the ribbon and switch off things like the formula bar, headings, and gridlines. Does not work with software other than Excel.

In the upper left you’ll see a section labeled D&D BECMI Class Features and Relative Values. These are subjective xp values I picked for the various class features. Feel free to alter numbers in the gray-shaded cells if you wish. I’d suggest skipping this section altogether for now and trying out the spreadsheet first. Values are weighted so end results fall within the xp range for the revised character classes I posted on Blogspot in the past few months (approx. 1,000 to 4,000 xp). I appended a list at the end of this article. These results are compatible with classic BECMI/RC numbers. 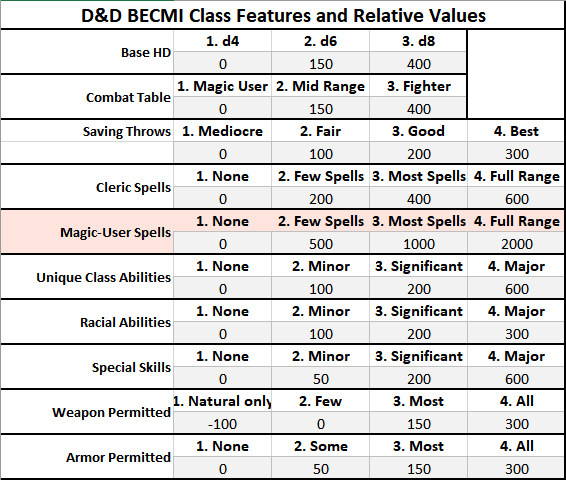 To the right, check the section labeled Class Features–Approximate Rankings–XP, with a series of dropdown menus for each of the class features. Select the most appropriate choice for each. This is a tricky process, because it won’t be clear at first which choice best describes each feature. I’ll clarify each entry in the list below. 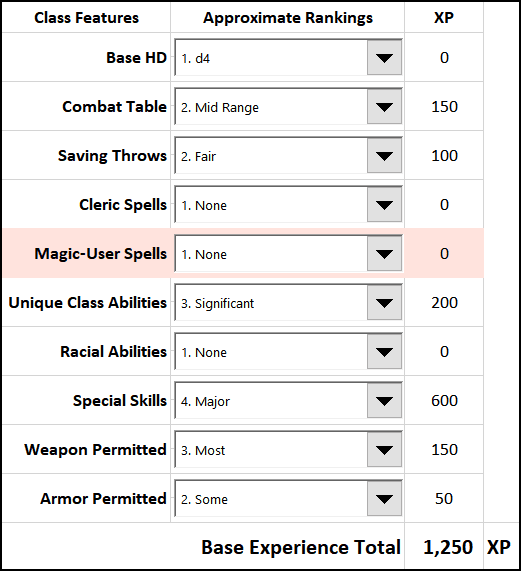 Base HD: This one is pretty simple—d4, d6, or d8. In general, the weakest choice gets a “0 xp” rating. The strongest choice gets a ranking many times higher than the previous ones in order to be more relevant in the long run. So, d4 gets “a big, fat zero,” d6 gets a 150 xp, and d8 a whopping 400 xp.

Combat Table: Whether your character fights as a magic user, a fighter, or something else (listed as “Mid Range.”) Same deal. Next…

Saving Throws: This is based on my “revised” saving throws. Click here for this article if you need a refresher. I’m sure you’re getting the point by now.

Cleric Spells: If your character can cast cleric spells, pick the right description. Full Range is for classic clerics. Most Spells applies to classes that cast fewer spells up to level 5. Few spells relates to classes able to cast spells up to level 3. The latter two imply a slower spell progression and possibly certain categories of spells disallowed. I kept this vague because there’s no good way to quantify every possible variation in a simple and manageable manner—hence the end result being qualified as “ballpark.” Pick the best fit.

Magic-User Spells: Pretty much as above. Full Range is for classic magic-users. Most Spells applies to classes that can cast fewer spells up to level 6. Few spells relates to classes able to cast spells up to level 3. Pick the best fit. I’ve assigned 2,000 xp to the full range, but feel free to change this value to 2,500 if you really want to emulate classic game stats. Magic-users are pretty powerful at high levels, so their spellcasting up to spell level 9 rates at least 2,000 xp versus cleric spellcasting up to spell level 7 only fetching 600 xp. It's debatable for sure.

Unique Class Abilities: This includes unique or rare abilities, such as turning undead, reading/casting magic from scrolls, and backstabbing. Minor applies to classes with a single ability used occasionally. If there are multiple abilities certain to be used frequently, select Major, such as a mystic’s abilities. Significant offers an intermediary option if the other two don’t fit.

Racial Abilities:  The approach is similar to the above. Use Significant for demi-human classes in general—things like resistance to dragon breath, combat bonuses vs. giant, etc. In the case of the half-orc, I’d select Major, given the number of abilities and the likelihood they’d be used in most combat encounters.

Special Skills: These abilities relate to skills, such as thieving skills, combat maneuvers, weapon proficiencies, weapon mastery, etc. Same idea as above. Thieving skills and fighter combat skills qualify as Major. Be careful not to duplicate abilities already listed in previous entries. If you create a cross fighter/thief class, adjust the base xp by about +200 to fully account for the fighter skills over and above those of a thief; use the discretionary modifier box for this (see the next section).

Armor Permitted: As above. Few would describe a thief. Most relates to the problem with oversized or undersized character races—no actual restrictions exist but size becomes an issue. All applies to elves, clerics, and fighters.

Once you’ve gone through this selection process, you can see the ballpark xp total to reach level 2. Scroll down a bit and look on the left.

Type of Advancement–Level Progression Table: You can see what your character’s level progression should be, based on your previous choices. Select the type of advancement that you want. The first three settings emulate classic level progressions. If you prefer some other custom scheme, select the last option. If you do, be sure to enter under “Alternate Intervals” how many xp each level requires above level 9 (the red box). You can also tweak results to increase or decrease base xp needed at level 2, using a discretionary modifier (the yellow box). 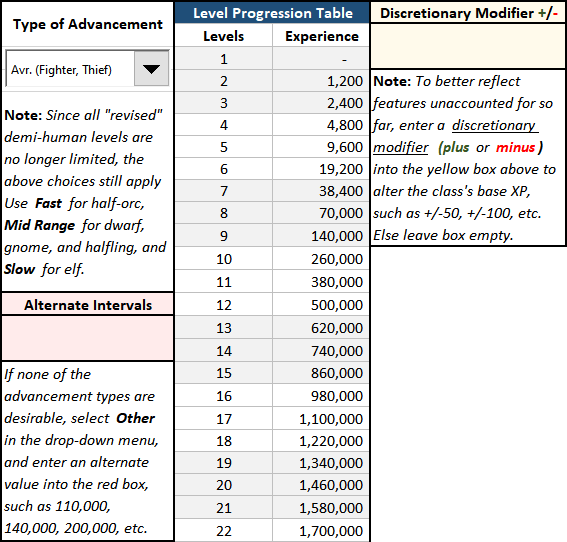 Saving Throw Parameters: Shift to the section on the right of the xp chart. This relates to my revised saving throws (see ref. earlier). Select your character class from the first dropdown menu at the top. Unless you’re designing a custom character class, skip to the next paragraph. Otherwise, pick the last option at the bottom of the dropdown menu: “11. Custom Class.” You then need to select options from the next four dropdown menus below. 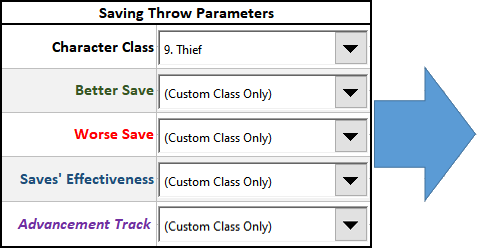 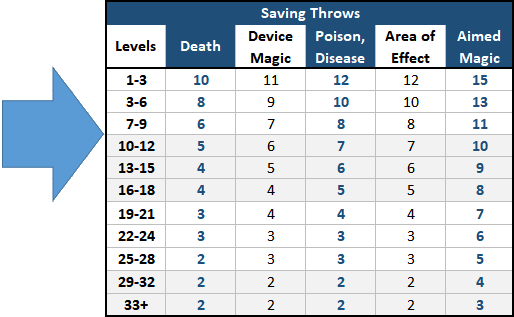 Saving Throws Table: When done, follow the big blue arrow to the right. Your character’s saving throws are listed there. By now, you’re done with critical features of your character class. It’s also a useful tool for someone like me, to create alternate character classes using the same basis across the board—as promised! 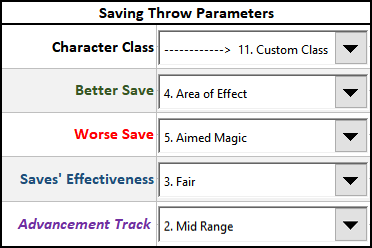 I included a few extra bits at the bottom of the spreadsheet.

Monster XP–Character Level Conversions: Those are self-explanatory. The conversion system is a very simple one just to give you a quick-and-dirty answer.

Do not bother with “Miscellaneous Criteria” if you find them: stay on the Main Page. The criteria section is just a bunch of reference material needed for the dropdown menus and Excel formulas to work. Ideally, I should review all of my previous character class designs, incorporate feedback I ran across, and update their xp totals according to the system presented here. For reference, here are links to relevant articles posted previously:

Other character classes were introduced in Calidar books: