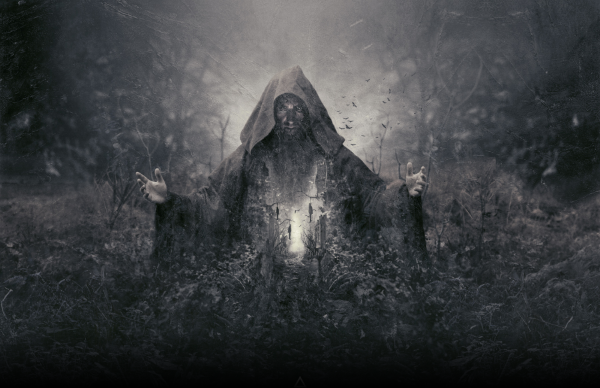 After posting a number of articles about character classes, some hindsight might be useful. One reason I wrote revisions and additions was to boost player characters’ lowest levels—hence extra spells at the first few levels, modified class abilities, etc. The other reason was to stretch demi-humans experience progression to the full 36 level range. One pothole remains (I’m sure there are others), but this one needs particular attention: saving throws. These weren’t handled in the RC’s variant rules (see pg. 266), leading me to an expedient using the saving throws of thieves or clerics instead. This was less than ideal. Rather than approach the matter willy-nilly and rely on ad-hoc, seat-of-the-pants guesswork, I thought of reviewing the entire saving throw subject and coming up with rational mechanics applying consistently across the board to all character classes.
Art Credit: Death Maker by 3mmI on Deviantart.

With this older version of D&D, be aware that unlike more recent game versions, races are treated as classes—thus an “elf” is a class onto itself, and so are the dwarf and the halfling. While human character classes can reach level 36, demi-humans are limited to around level 10. If you are a big fan of 5e, that’s great but this article isn’t meant for you. Comparisons and personal judgements on the nature of games from the early 80s are irrelevant here and unwelcome. Please consider this analogy: plenty of folks love the latest car makes, with the best modern technology can offer; others collect vintage cars as a hobby. Neither is wrong. D&D BECMI also fits on the vintage side of things, much like most other OSR fares.

Inevitably, I questioned this arrangement. I wondered about the logic of combining death rays with poison—perhaps that failing this save would result in instant death. What of magic wands? Why aren’t they lumped together with rod, staff, and spells? It was suggested to me that one might be able to dodge the effects of a wand. Okay, but then can one also dodge the effects of a staff or a rod, or even a spell? I found nothing specific on this subject. Paralysis and turn to stone have a category of their own, although they are different things (one could be related to poison while the other to a spell or a gaze attack). Etc.

Of course, saving throws in BECMI are the result of earlier B/X concepts, and I’m fine with that as regards playing the classic version of the game. I’m looking for an alternate approach. Sure enough, some folks will be shaking their fists and calling me a heretic. Just have an open mind for a bit longer and hear me out. Here's a different arrangement:

When considering which category applies, start with Death. If it doesn’t apply, move to the next listed item: Device Magic. If it doesn’t apply either, check the next entry: Poison, Disease, etc. This order matters because each entry’s challenge level gradually increases, from Death (the easiest to succeed, thankfully) to Aimed Magic (the most difficult).

The next task is to create a set of mechanics to calculate base scores for each character class. Calculations must apply systematically and in exactly the same manner across the board. They serve as a common basis from which to compare the saving throws of demi-humans up to level 36 with those attributed to human character classes. Therefore, all saving throws need to be calculated accordingly (not just the demi-humans'). Three main factors should influence base scores:

Looking at classic saving throws, it’s easy to ascertain they run from 8 to 16 at level 1 (not counting Normal Man). The median score across the board is therefore 12. Fighter and Mystic are the least favorable, while demi-humans seem to be the best.

A series of base handicaps can be applied to the median score (12) to calculate first level scores. Minuses are bonuses, and plusses are penalties. Modifiers relating to saving throw categories and character classes are straightforward. The "better vs. worse" handicaps, however, need to be plotted out before moving forward. The table below shows which categories are best or worse for each character class.

Each character class is assigned a type of saving throw for which they are better and another for which they are worse. This ensures that no two classes have the same sets of saves. I included the extra classes I posted earlier (the gnome and the half-orc). Decisions on which type applies to which class are entirely subjective on my part. Feel free to swap classes around if you wish. The mechanics below will allow such changes and show exactly how they affect saving throws. Some of my logic reflects the following thoughts: fighters do their best against dragon breath, but worse against aimed spells; dwarves do their best against aimed spells but relatively worse against areas of effect, and so on. Eventually, the rest falls into place as shown above. All handicaps are compiled in the table below. 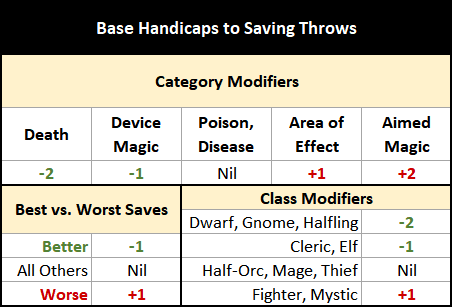 Example: To save vs. Area of Effect, a fighter needs a “12,” plus 1 for the category, plus 1 for the class, but minus 1 since this is what the fighter is best at. The resulting score is “13.”

This simple approach is all that is needed to generate all first-level saving throws for each class. I listed them in the table below. I included the average score for each character class, which explains the order in which I laid them out in this table. 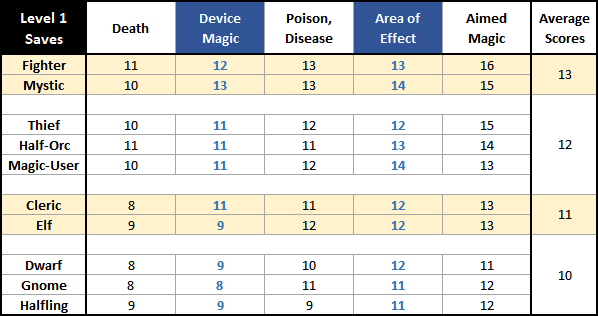 The final task is to find what the saves are at level 2 and higher. Use the table below and look up the appropriate column for each category. Cross-reference this column with the row corresponding to the character’s experience level.

Modifiers from ability scores can have an effect on saving throws. Everyone has their version. Here's one, adapted to the above.

In most cases, these saving throws are more forgiving at low experience levels compared with the classic scores (which was one of my goals), but less so at mid or higher levels. How quickly these saves improve is also more benign at low levels compared with classic scores. For example, fighter saves improve every 1-2 levels early on, vs. 1-3 with classic scores; magic-user saves improve every 1-4 levels early on, vs. 1-5 with classic scores; etc. The table showing the full range of saving throws streamlined the progression of saves compared with the classic tables. For example, classic saving throws for a fighter are laid out over 12 rows, while classic magic-user saves take only 8, whereas alternate saves suggested here demand 11 rows for all character classes. As a consequence, the alternate progression per level differs from classic saves in this respect as well.
The two previous tables are all you need to fill out character sheets. This cuts out the original seven saving throw tables, leaving you with just these two. Furthermore, you can play with the mechanics to modify base saves, while resting assured that you are using consistent numbers at all times. At worst, if you dislike the resulting modifications to the human character classes, keep their original scores, and use the above system only for demi-human saves now ranging up to level 36. For simplicity, treat monsters as fighters, although you could use creative license with what they are better vs. worse at.
I’ll throw in one last table, for comparative purposes only. It compiles all saving throws for the fighter class, both alternate and classic, with average scores on the far right. The comparison is somewhat valid despite the modifications I made to the categories. They give an idea nonetheless as to how their numbers compare. Overall, the average of all alternate saves (all fighter levels included) adds up to 6.6 vs. 6.8 for classic scores. 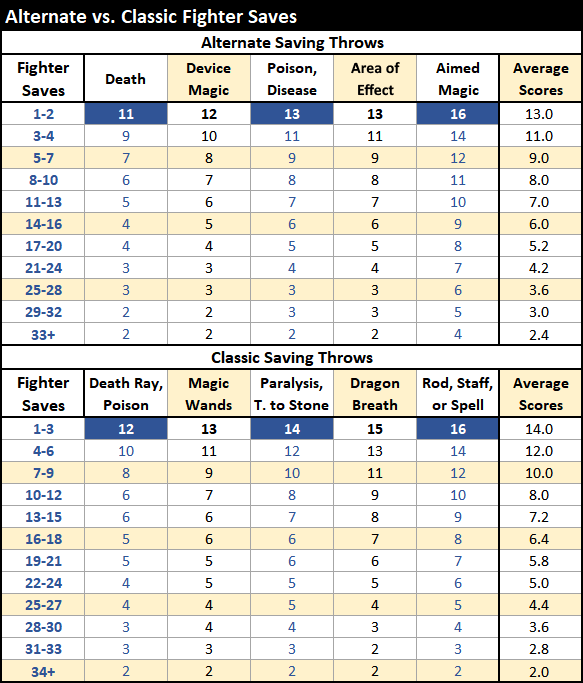 Sorry for the lengthy explanations. I compiled the complete saving throw tables for character classes recently brought up on this blog for your convenience. Click here to access the compilation. Hope you enjoy these optional saving throws.
at 9:00 AM