Previous "experimental" articles recently addressed a desire to boost low level characters used in the D&D BECMI game. So far, the spell progression tables for magic-users and clerics have been addressed, I've given the elf class my take on related issues, as well as the classic thief's skill progression table. I haven't addressed the classic fighter and dwarf classes since I didn't think they needed anything extra. One more topic remains therefore: halflings, the grandest of little heroes.
Disclaimer: These articles are exploratory in nature. Anyone reading this who is of the opinion nothing in the grand ol' RPG should ever be altered, this isn't for you. But you knew that, right? Just in case: this isn't AD&D or D&D 5e. These are different games, with different mechanics. Changes I'm suggesting will intentionally alter the balance of the game at the first few levels. I guess I'm a heretic. Playtest is needed to identify what still appears too weak or seems too powerful in order to ensure all classes remain equally attractive. Constructive feedback is always welcome. Gripes and fist-shaking... not so much. Thank you.
Back to the Halflings. Based on what I could observe over the years, few people really like the "official" halfling. Its by-the-book benefits are as follows: a few combat bonuses, stealth abilities, resistance to spells and dragon breath at higher levels, and really good saving throws. Were all those enough to make the halfling as attractive as the classic fighter? Apparently not. I think the biggest issue is the level limitation. The RC introduced optional rules (page 266) enabling demi-humans to reach level 36, like human classes do. As a result of this, suggestion is made there to use the cleric's combat table.
General Ideas: I'd like to suggest a drastic revamp. Following the idea of the elf being a hybrid fighter/magic-user, I thought of making the halfing a hybrid fighter/thief, with a twist. Halflings have been portrayed in fantasy literature and hobby gaming as folks oriented toward nature. Following this mindset, perhaps halflings should also have a limited access to druidic spells. This would depart dramatically from the notion that D&D BECMI should be as simple as possible. A halfling with some thieving skills and some spellcasting ability does not make for a "simple" character class. With a broad grin on my face, I'll just say that I'm really not writing this article for noobs anyway. So there!
Spellcasting: My "alternate" halflings earn their first druidic spell at level 2. Access to higher level spells comes much later compared with the "official" cleric. Halflings earn 7th level spells at level 25, vs. the 17th for a normal cleric.  If absolutely needed, normal clerical spells can be substituted for druidic magic, provided the choice of immortal patron warrants it. Druidic spells are more related to the halfling's closeness to nature than actual alignment orthodoxy (as regards Lawful or Chaotic vs. Neutral) or a specific faith. Alignment otherwise ought to befit a chosen immortal patron.
Burglary Skills: Alternate halflings do not enjoy the classic thief's backstab ability. I also removed Pick-Pocket as an option. Given how short halflings are, trying to pick a human-sized individual's pockets might lead to improbable situations. I combined Open Locks, Find Traps, and Remove Traps into one single Fingerwork skill. In a bind, Fingerwork can also be used for anything requiring precise manipulation. Outdoor Stealth comes from the official rules allowing a flat 90% chance of success hiding in woods and underbrush (I'd throw in any vegetation tall enough for halflings to hide in, such as cornfields, for example). Indoor Stealth is akin to the thief's Hide in Shadows, although it does not allow moving while hidden (as described in the official rules). I'd halve the outdoor score and request a reroll anytime the halfling attempts to move. Most success scores are lower than those I listed in the improved thief skill table I posted earlier. 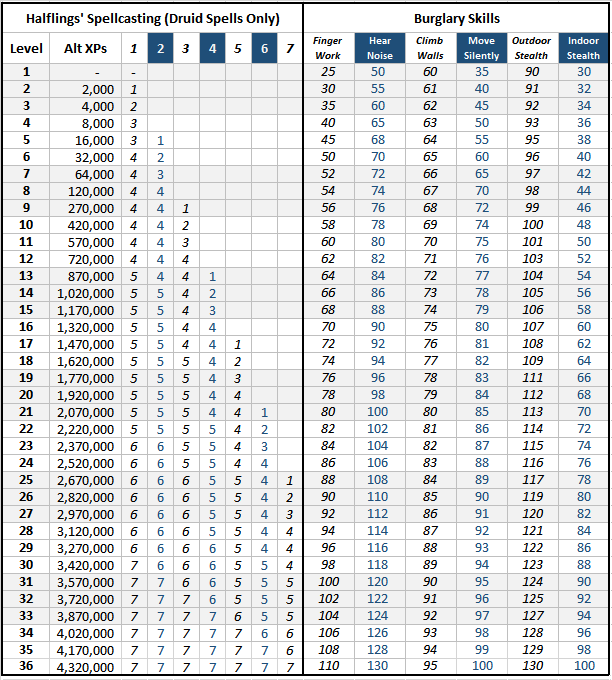 The remainder of official rules seems appropriate to retain. This includes the combat bonus table (RC, pg. 26), special attacks, fighter combat options (at 13th and 24th levels), and special defenses (at 9th and 15th levels). Attack rolls and saving throws should be those of the classic cleric. Base HD remains a d6, +1 hp at level 9 and above. I've also trimmed down experience points needed at level 9 and higher.
Conclusion: Although this version of the halfling cannot compete directly with my "upgraded" thief, it can still prove useful in this capacity. It does have better combat skills and special abilities due to its size, as well as a base d6 HD (vs. d4 for the official thief). This halfling also develops druidic spellcasting, with a slow spell progression compared with the cleric's.

Edit: This variant of the halfling ought to be limited to just leather armor, given its thief-like features and druidic spellcasting.

Click here for the update on the halfling class.
Art Credit: Yof Bramblethorn - Halfling Druid by toshi13go (Kamanaka Satoshi) on Deviantart
at 7:30 AM