With all the libraries existing in Calidar’s Magiocracy of Caldwen, there ought to be a specialized magic-user sub-class to oversee them. My general approach is to reduce the number of spells the specialist librarian has available (as well as the top spell level attainable), in exchange for a good number of special powers related to the profession. Although not best suited as player characters, librarians should excel as NPCs in their intended environment. This description provides versions for D&D BECMI and later game versions. This hasn't been playtested, so your comments are welcome, in particular as regards game balance. Thanks!

The Oath of Custody: Before going further, librarians must belong to a guild of librarians, from which they can learn their trades. The guild ensures the integrity of their business. Therefore, all aspiring librarians must pronounce the Oath of Custody before guild masters and peer witnesses, and forever honor it. This oath demands that "No books, regardless of their natures, must ever be allowed to be damaged; furthermore librarians witnessing such acts must intervene and seek swift retribution against defilers, starting with a sound thrashing for defacing the written word up to and including death for destroying works of magic." Failure to honor the oath results in fines, expulsion from the guild, and/or death for the worst of violations. Librarians are also required to pay 10% of their earnings to their guilds.

Terminology: Books are defined as any form of written material that could be found in a library, including scrolls, leaflets, maps, and objects with inscriptions of a relevant nature (carved bone, wood, ivory, clay tablets, tattoos featuring text or maps, etc.) A known book is one that was held in hand and read or studied at some point in the librarian’s past. Notable works are those librarians have heard of, but never personally read or studied.

Experience Progression: The three columns on the left of the Advancement Table (see below) show experience levels for different RPGs. They all range from Level 1 to the level at which conventional magic-users become able to cast a 9th level spell in all three game versions (printed in red in the table). Scale A is for BECMI (9th level spells are available to 21st level magic-users), Scale B is for AD&D 1st and 2nd Editions, and Scale C is for D&D 5e and Pathfinder. Experience points at each level are those listed for magic-users in the chosen RPG. This ensures that this character class compares roughly equitably in all game versions, based on what spells they are able to cast (not so much on experience points themselves or the ease at which levels can be earned).

Librarians acquire special powers as they progress in their careers. In some cases, multiple abilities may be acquired, early on and when a gap occurs between two experience levels. For example: under Scale C, a gap separates levels 2 and 3, therefore both F and G abilities are earned when reaching the 3rd level. Librarians tap into the mystical force of books to pool the residual auras of their authors, and conjure it into special magic.

[[This space is reserved for readers’ giggles.]]

Unless indicated otherwise, basic success odds (bso) for many of these abilities are 60% +5 per spell level available to the librarian. For example, a neophyte (Level 1 spellcasting) has a 65% chance of success (60+5), while a librarian able to cast Level 7 spells would enjoy 95% odds (60+35). At the referee’s discretion, players only get to roll dice once when using an ability; if the attempt fails on a specific target, the librarian must earn another experience level before trying again. A roll of 00 always fails; a roll of 01 always succeeds. 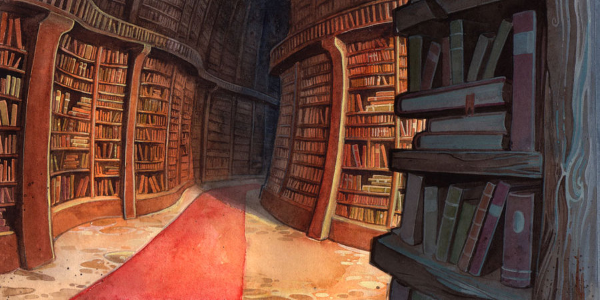 
A.  Appraisal: Librarians can estimate the value of books (see bso listed above). Subtract 3d6 from the score needed if a book is enchanted, 6d6 if a relic; the referee rolls the dice. If the roll fails, the extent of error is as follows: roll 1d4 or at the referee’s discretion—with a 1, it is thought to be half its true worth; with a 2, twice its actual value; with a 3, a worthless fake; with a 4, a priceless and unique work well beyond its actual value. The librarian must be able to examine the contents closely for at least several minutes. Add +1d6 to the score needed if the librarian spends more than an hour with the book. Add another 1d6 if the book is a notable work.
B.  Detect Missing Book: When examining a shelf they stocked, librarians can always tell if a book has gone missing or was disturbed in some fashion, and which one specifically. No die roll is needed for this ability.
C.  Book Lore: Librarian can identify the true authors and other pertinent details about non-magical books held in hand (where and when they were written, under what circumstances, and for what purposes). See bso earlier for enchanted tomes, spellbooks, or notable works—referee rolls the dice. No lore is recalled if the roll fails (a critical failure may result in wrong information).

Email ThisBlogThis!Share to TwitterShare to FacebookShare to Pinterest
Labels: Caldwen, Calidar, Character Class, Dungeons and Dragons, Game Conversion
Newer Posts Older Posts Home
Subscribe to: Posts (Atom)
Please use this button for private purchases, late Kickstarter pledges, or just beer money! Contact me on Facebook or Mewe if you have any questions -- Thank you!
Knights, dragon slayers, & bards unite... or not.