Now this was a fine vintage! 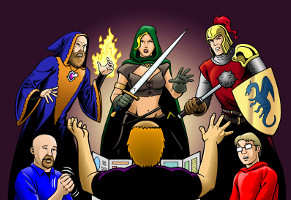 Although I attended in a most relaxed fashion, I spent more time at the convention than I ever did.  Then again, it was the first year that I hosted events.  I showed up Thursday and played a. . . game.  Imagine that!  (I forgot the title of course).  Sitting in the open gaming area, facing toward the lake  in back of the resort, I enjoyed the mist-shrouded landscape as much as the game itself.  We all finished within one victory point of each other.  I was brave enough then to drive away for lunch, leaving my parking spot open some someone else (yes, good parking space comes at a premium at Geneva Ridge).  The resort isn't really designed for a convention, but it's part of its charm.  I headed over to the Delavan inlet, and grabbed a giant calzone at Jojo's.  No way I could eat all of that, so half ended up in the styrofoam doggie box.  It was cold enough outside I didn't worry about the food going bad.  Miraculously, I found another parking spot when I returned.

After a quick chat with Dale Leonard, I received a much desired pass for a VIP parking slot in front of the entrance.  That was a nice touch.  While taking many pictures, I bumped into many old friends.  Time for my seminar came around very quickly.  With convention success come greater challenges: due to lack of space, seminars had been relegated to. . . the bar.  Ouch.  Between 6 and 8 pm, it was pretty noisy there.  And, I managed to misplace my reading glasses.  Great.  Without them, there was no way I could decipher my notes.  A fellow attendee kindly loaned me his.  That made for a rather bumpy seminar.  I'm told seminars will be handled at another location next year, but the exact place remains up in the air, since that's still being negotiated.  I believe seminars will end up in downtown Lake Geneva.  There already is a shuttle service to The Cove, where many participants have their rooms, since not everyone can stay at the Geneva Ridge resort (it is hopelessly full!)  It would make sense therefore that seminars be held nearby, Lake Geneva being a conveniently small town. 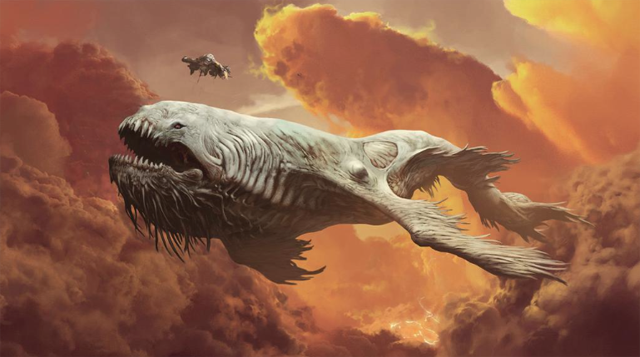 I just ran across a post showing a preview of the upcoming SF movie “The Leviathan.” The art is striking in its own right, but for me it really hits home since this parallels one of my original concepts for the World of Calidar. Click here for the original article about this movie, so you’ll know what I’m talking about. I couldn't help make the analogy with a Ghülean grön. Picture Calidaran wind-driven skyships instead of anti-grav gunboats. Replace energy blasters with wizard spells. Imagine tattered, orcish standards fitted on the leviathan, along with defensive turrets for war-machines, and a few metal plates bolted on the beast's skin. Now multiply the leviathan times the number of Ghülean hordes flying through the clouds.

For good measure, I took my original description from CAL1 and posted it here.

These creatures are native of Ghüle, the orcs’ alien world. They are colossal, grossly fat, mangy worms partially covered with gray fur except where orcs have bolted armor plates onto them. Orcish standards and the bones of defeated monsters sometimes adorn the beasts. Like those on humpback anglerfish, appendages with glowing lures extend from the top of the gröns’ monstrous heads. Two huge, greenish eyes complete the picture. Gröns vary from the size of small galleys to something large enough to swallow several thousand orcs and their war machines.

Email ThisBlogThis!Share to TwitterShare to FacebookShare to Pinterest
Labels: Calidar, In Stranger Skies, Voyages of the Princess Ark
Newer Posts Older Posts Home
Subscribe to: Posts (Atom)
Please use this button for private purchases, late Kickstarter pledges, or just beer money! Contact me on Facebook or Mewe if you have any questions -- Thank you!
Knights, dragon slayers, & bards unite... or not.