The next character class on my update list is the gnome. The experimental version I'd posted back in March was a bit controversial. Some readers didn’t like the idea of a gnome illusionist, so I’ll split the class into a simple warrior and an illusionist version. If you want something else entirely, you have the tools to create a class option that meets your goals. Again, there’s plenty of room for options!

I compiled the various features and abilities given in the source article to obtain a simple warrior class, and another with the magical abilities described originally. You’ll have to go back and refresh your memory about the initial design. 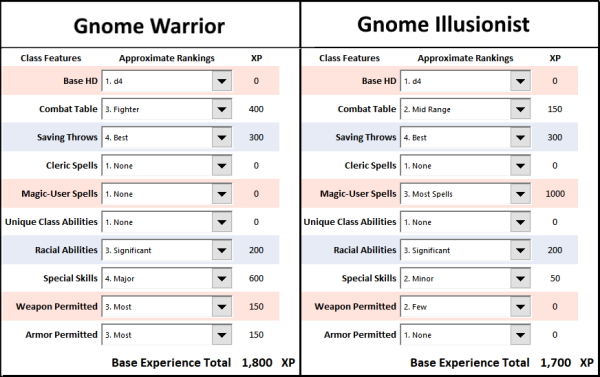 1. Gnome Fighter: Chop up the magical skills and feed them to the wolves. Keep all the racial and fighter abilities, and you end up with a Base xp 1,800. The saving throws are the same for both gnome classes. 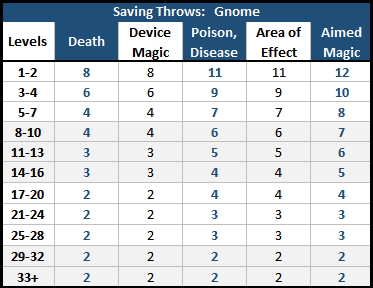 2. Gnome Illusionist: Keep all the racial abilities. Reduce the fighting skills and related combat abilities to those of a cleric. Weapons and armor permitted are those of a standard magic-user. The original article describes magical skills (abilities rather than traditional spells). The gnome illusionist ends up with a Base xp 1,700.

Resulting experience tracks based on the Excel spreadsheet are listed below. If you're looking for the author, he fled south of the border.

Email ThisBlogThis!Share to TwitterShare to FacebookShare to Pinterest
Labels: Character Class, Dungeons and Dragons, Game Mechanics
Newer Posts Older Posts Home
Subscribe to: Posts (Atom)
Please use this button for private purchases, late Kickstarter pledges, or just beer money! Contact me on Facebook or Mewe if you have any questions -- Thank you!
Knights, dragon slayers, & bards unite... or not.