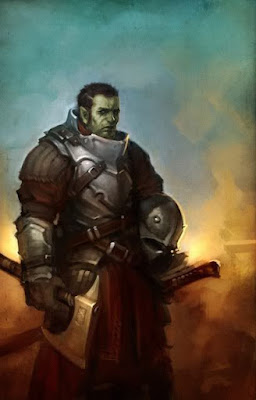 This is beginning to sound like an ongoing joke. But hey, since I’m at it, I might just as well. What on @#&! (replace with appropriate game world) am I going to do with half-orcs now? Fret not. I do have a few ideas to set them apart from your basic fighter AND make them feel a tad beastly!

If D&D BECMI isn't your thing, be aware that unlike more recent game versions, races are treated as classes—thus an “elf” is a class onto itself, and so are the dwarf and the halfling. If you are a big fan of 5e, that’s great but this article isn’t for you. Comparisons and personal judgements on the validity of games from the early 80s are irrelevant here and unwelcome. Please consider this analogy: plenty of folks love the latest car makes, with the best modern technology can offer; others collect vintage cars as a hobby. Neither is wrong. D&D BECMI also fits on the vintage side of things, much like most other OSR fares.

Origins: Much of how orcs are perceived comes from literature, especially Tolkien and the medieval tale of Beowulf, which Tolkien points to as his source. In Beowulf, the “orcneas” are evil spirits (no connection with Orkneys as far as I know). In Tolkien’s Middle Earth, orcs are brutal and malevolent creatures, possibly descended from corrupted elves. Previous to this, “orc” came from the Latin “Orcus,” a name for Pluto, the god of infernal regions. In old Anglo-Saxon, orc refers to some kind of goblin (don’t tell the orcs). In the 17th century, the word morphed into “ogre.” The latter term came into English through French fairy tales which took it from Italian literature—“orco” referring to a big, hairy, tusked, man-like monster that seeks to devour people. It was meant consistently through the ages as a malignant and brutal boogeyman to scare a storyteller’s audience.

How do I see Orcs? Based on original depictions in roleplaying games, it’s a brute living within a tribe’s rigid pecking order reflecting individual strength and ferocity, and who is often inclined to acquire by force what it needs or wants. Spiritual beliefs reflect a rough-and-tumble culture, and appear to the outside world as crude and blood-thirsty. Much of what is known of orcs comes from how their victims see them. They are universally thought of as malevolent thanks to their harsh upbringings in the harshest of worlds. Would they remain naturally evil under different life conditions? Perhaps, but at the very least, their fundamental character endures: coarse mannered, distrustful of those above them, intolerant of rivals, and unforgiving of those they perceive as weaker. Somewhere between belligerent and thuggish, orcs bow nonetheless to those who prove themselves tougher… or they die. They are compelled to confront or bully others because their kind always had to fight over scarce resources for the sake of their tribes’ survival. It’s in their blood. Strength, ferocity, and resilience run deep, along with a wild streak.

Concepts: I see the half-orc more as a warrior class in BECMI than anything else. The goal is not to make the existing fighter class less attractive or short-change the half-orc. Rather, game mechanics for this class of warriors should illustrate the half-orc's mindset and ancestral traits: Strength and Ferocity, by Khroomsh!

Half-orc warriors need not fight as well as fighters. These pragmatic folks aren’t interested in the technical end of things. Spirit and resilience is what makes up for their lack of sophistication. I can guarantee you that your half-orc will not want to run from combat. What happens during a battle, therefore, determines how hard your half-orc will fight. It won’t go down easily, and can recover from its wounds on its own. It’s really good at snarling too. Its fairly benign experience progression table is a straightforward affair. It encourages cunning warlike instincts rooted in eons of fine tactics evolution: Khraugor smash!

Prime Requites: Constitution. Strength should be at least 9.

Experience Bonus: I give a +5% if Con lies between 11 and 12, and +10% if less than 11, implying that all other stats are lower than the prime requisite. At 13+, stats provide conventional bonuses.

Hit Dice: 1d8 per level up to 9th level, +2 hp per level thereafter, and Con adjustments no longer apply.

General Abilities: Fights and saves as a thief. Starts with 2 weapon proficiencies (instead of the fighter’s 4) and earns new ones as a thief.

Armor & Weapons: Any. Although half-orcs are free to wear any sort of protection, excess armor may eventually prove counterproductive to this character class. It’s up to the half-orc to strike the right balance between risk and benefit.

Special Abilities: Extra languages (dwarf, goblin/hobgoblin, ogre, troll); –2 Cha bonus with orcs and half-orcs related to rival tribes; Infravision 60’. Half-orcs may wear tattoos related to their ancestral tribes. In an odd and slightly masochistic way that other races do not fully grasp, half-orcs gain combat bonuses when suffering damage (First Blood & Battle Scars). Under certain conditions, they also heal on their own (Resilience).

Daylight Penalty: –1 to hit and saving throws when exposed to direct sunlight (ignore in overcast conditions or within an hour of sunrise and sunset). A goblin hireling with a large parasol can’t solve that problem. Sorry.

Battle Scars: When reduced to 1/10th its normal hp or less during a battle, the half-orc suffers a permanent scar. With each battle scar, the half-orc earns a +1 to saving throws, up to a maximum of +4. The half-orc also incurs a   –1 penalty to Cha for each battle scar, up to –4 when addressing other races. Battle scars confer instead +1 Cha bonuses (up to 18 Cha) when interacting with other half-orcs (see Posturing Snarls later on), as they are a mystical source of great personal pride and accomplishment. I got more scars than you. (Oh yeah? Mine are bigger!)

Resilience: After slaying a foe in battle, the half-orc heals 1 hp per hour until fully recovered. This ability does not regenerate destroyed body parts or revive a dead half-orc. With 5 battle scars, it heals 2 per hour, with 10 scars 3 per hour, etc. This mind-over-body aptitude is only triggered by the thrill of slaying a foe with at least half as many HD as the half-orc’s. For example: A level 1 half-orc can trigger its healing ability when slaying a puny kobold in battle; however a level 8 half-orc would need to strike down an ogre instead. The slaying must be in the context of a battle—executing prisoners or helpless foes does not elicit a sufficient thrill level.

Death Door: Most DMs have their own rules on what constitutes "death" in their games. In many, a PC lies at "death's door" when hit points drop to zero down to –10. If this results in "blood loss" (losing a hp each round), then resilience will not be sufficient to revive the wounded half-orc. On the other hand, it could slow blood loss to 1 hp every two rounds. Us folks is tougher!

Battle Roar: A half-orc bearing at least one battle scar can roar once per battle. All foes within 90' receive a –1 penalty to Morale Check thereafter. The penalty grows for every 3 permanent battle scars, up to –4. The battle roar counts as a full action as it is somewhat equivalent to a warrior's haka. The next action must be to engage in hand-to-hand combat. Beat it, vermin!

Posturing Snarl: When half-orcs meet, they may snarl at each other for one round. They both roll a d10, adding their Charisma and battle scar bonuses. The one with the worst result backs off and accepts the other’s leadership. Ascendancy ends when the underling earns a new battle scar, at which point snarling may resume. If they’re tied, snarling continues for another round. If still tied, fighting ensues until one yields… or dies. You talkin’ to me?

Self-Inflicted Wounds: Deliberately harming oneself, directly or indirectly, or inviting injury at the hands of another does not trigger first blood or resilience effects. Self-inflicted damage negates resilience if healing was still in progress. Self-inflicted battle scars do not count; a half-orc rumored of self-mutilating would be seen as an outcast and a coward, resulting in all battle scars permanently losing their “beneficial” effects.

On the other hand, cutting oneself for 1 hp and licking the blood off the blade with wicked glee, is mighty acceptable and righteous when specifically meant to intimidate. The action affects one immediate opponent or a group of foes with HD (individually or collectively) less than the half-orc’s. If these conditions are true, then the targets of intimidation must immediately roll a Morale Check. This show of sheer savagery bears no adverse effect on first blood, resilience, and battle scars, but can only be performed once per battle. Hawrrrg! It’s not Nutella!

Regarding Spellcasters: The Rules Cyclopedia allows spellcasting orcs—tribal shamans and sorcerers up to levels 6 and 4 respectively. As NPCs or monsters, this option is easy enough to put into effect. PC spellcasters are a different issue. Though half-orcs aren’t “full-blooded” orcs, the idea of an unlimited and proficient half-orc magic-user conflicts with this article's paradigm. Certainly, half-orcs can have clerics. For the half-orc to enjoy a cleric’s spellcasting ability in addition to its other class abilities, start out with 2,300 xp needed for level 2, doubling up to level 8, and with an additional 120,000 xp per level thereafter. Check the revised spell progression I gave clerics in a related article (click here).

Regarding Calidar: This setting hasn’t used half-orcs as of yet. I may just use the above material as an alternative to the setting’s inspiration from AD&D 1st Edition multi-classed demi-humans. None of what is posted here has been play-tested. Actual gaming feedback would be appreciated. Thanks!