Nominated for the 2014 RPG Geek Awards' Best RPG Supplement,
and rated among the top titles on EnWorld


The World of Calidar is a fantasy setting for use with any role playing game.  It is inspired from the Voyage of the Princess Ark stories published in Dragon Magazine in the 80s and 90s. What is special about it? 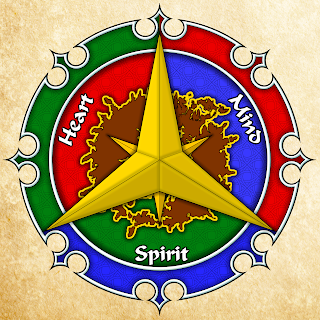 Three Moons, Three Empires.  Calidar is the name of a planet around which circle three moons, one for each of the main off-world races--humans, elves, and dwarves.  For centuries, these rival empires have coveted the big blue world that looms large in their skies.  Facing overpopulation and their lunar resources' approaching depletion, they've yearned for new lands over which to expand.

The Dread Lands.  Learning how to travel through space enabled colonists to finally set foot on Calidar's surface, only to discover that its vast and rich lands were hostile to newcomers.  Soon after colonies were established, not only did fellfolk tribes--native of this world--relentlessly attack them, but nature itself rebelled, with wildlife and foliage coming alive, spurred on by powerful elemental spirits.  It didn't matter where colonists landed. Whether they chose wind-swept mountains, forests, swamps, sun-drenched deserts, or icy reaches near the poles, the outcome always was the same.  Newcomers were prompt to call this deadly wilderness the Dread Lands.

Planetary Life Force.  What the three empires did not know is that most worlds of Calidar's universe are receptacles of colossal magic, a life force ebbing and flowing eternally from all that rises and dies thereon.  This world is semi-sentient in some ways,  reacting against the injuries of civilization and the encroachment of careless newcomers who do not respect the sanctity of nature.  But a time came when Calidar's world soul suffered from an outer-planar malady.  It recovered, but during its moment of weakness, the Dread Lands became dormant in a small region.  Colonists seized this opportunity and rushed to establish new dominions on the Great Caldera, a small ring-like continent.  The growing presence of civilization there prevented the return of the Dread Lands, and all was fine until the colonies rose against their imperial overseers and wrenched from them their independence. 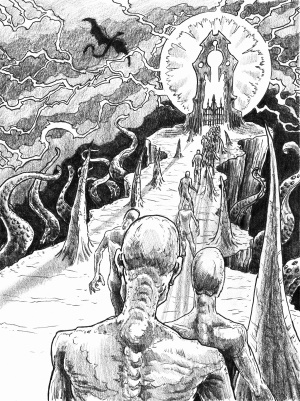 Sailing Among the Dead.  Reeling from their losses and opportunistic raids from their lunar peers, the empires vowed to retake what they had fought so hard to establish, and never recognized the Great Caldera's independence.  But wars across the Great Vault are expensive.  Enabling warships to travel from the moons to Calidar (and to worlds beyond) requires oil of seith, or seitha.  It is a concentrate of magical life force that sometimes can be found in the bowels of the moons.  With this substance and the right rituals, a flying ship can enter limbo, the realm of the rightfully dead, and navigate through it.  It is a mystery of Calidar that time and space in the netherworld differ from the world of the living, enough so that skyships reappear far away in the Great Vault, well beyond the reach of a traditional journey with simple ethereal sails.  Seitha is a rare and precious thing that is far more common in the Dread Lands, hence the empires' fierce desire to recover their colonies so they may exploit Calidar's arcane resource more easily, for sooner or later the empires will clash, and much seitha will be needed. 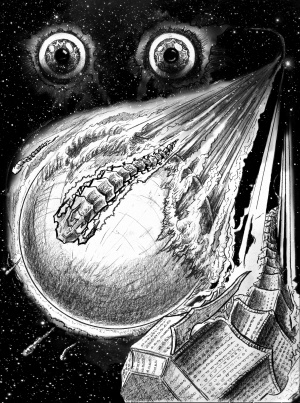 A Universal Peril.  The independent states fear the return of the empires, and have become tacit allies to protect their freedom, and to keep seitha out of rapacious imperial hands.  Elves, dwarves, humans, gnomes, and also native fellfolk of the Great Caldera work together to help ensure their success, for an even greater danger lurks far away beyond the darkness of the Great Vault.  It is known as Ghüle, an artificial planet bereft of soul and built by monstrous gods.  Within the confines of its vast dungeons, the dark lords housed millions of orcs and other creatures of evil.  Seemingly on a whim, the masters of Ghüle hurl this world into Calidar's universe.  As it hurtles through the Great Vault and slingshots round mighty Soltan, the orcs raid nearby worlds and their moons, plundering treasures and enslaving all in their path.  When the orcs return to their monstrous universe, the dark lords feast on the captives, and if there aren't enough to satisfy their hunger, they devour their servants as well.  Therein is rooted the orcs' reckless rage and determination to challenge the mightiest empires, to ignore whatever hardships and losses they must endure, and to never return empty handed.

Godly Puppets.  But what can fledgling realms of the Great Caldera do to oppose such ghastly peril?  Another mystery of Calidar is that its world soul's magic can be called upon if enough sapient minds pool their thoughts and beliefs.  It is so that the people of the empires as well as those in the Great Caldera have, with the help of prophets, created gods in their image.  Divine patrons emerged from the vast pool of Calidar's life force, both to lead their faithful and to behave as their creators hoped they should.  They too, among the divine, gaze with somber concern at the dimness of Great Vault's outer reaches.  They worry about losing these legions of mortals upon whose fragile existence the gods rely.  To be more truthful, it is Ghüle's unfathomable power they most fear, for if it grows strong enough, the dark lords might break into Calidar's universe and devour its gods as well. 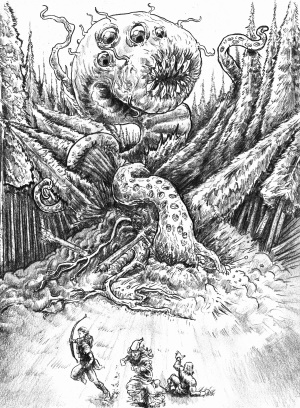 Epic Heroes.  Yet, it is in the hands of a mere few mortals that lies the fate of the gods.  On Calidar, one isn't thought to be quite dead until all memories of one's deeds are forgotten.  It is the prevailing belief as well as the origin of countless ancient legends.  The strange marvel of Calidar's world soul makes it so that mortal champions, fearless adventurers, notorious villains, and frightening monsters do not age, so long as their tales are told across the land.  These few are bold enough to defy fate itself and reach for the stars, beyond which even the divine dare not venture.  Competing deities will just as soon endeavor to sway to their sides these epic heroes or their villainous rivals, so they may bestow mighty quests upon them, possibly offering them in return for service and glory a path to true immortality and an honored place among gods.

In a nutshell, the human powerbase located on Munaan, is more like Byzantium on steroids, a monotheistic theocracy bent on serving a one true god.  Elves of Alorea are tree-hugging Nazis with living skyships that suck sap and can grow deck weaponry as needed.  Dwarves of Kragdûr come off as gold-loving, earth mining, steampunk Klingons (the best analogy possible).  Their ships are made of steel and shoot cannonballs.  No mistake possible here.  The gnomes are a mysterious and highly magical race, enslaved on both Alorea and Kragdûr, but free on Calidar.  The fellfolk are native half-pints with large, hairy feet.  They established a free kingdom in the Great Caldera.  Their wild counterparts of the Dread Lands, on the other hand, only obey their tribal shamans and live in harmony with the Dread Lands (usually) and the planet's world soul.  And, yes, they hate everyone else.

Click here to find out what to start with.

Origins of the Calidar project: This new world and its heroes are inspired from the Princess Ark stories I wrote some 20 years earlier for Dragon Magazine, while I worked at TSR.  The objective of these stories was to introduce regions of the Mystara game world outside the "Known World."  In Stranger Skies reprises the idea on a grander scale.  Though the world and its heroes are new ones, the "Spirit of Mystara" remains at least in the style the stories are told and the detail presented in the book's gazetteer section.  Click here to read more about the inception of the Calidar project.

Published by Calidar Publishing, PO BOX 625, Burlington WI 53105 USA. CALIDAR and the Calidar logo are trademarks owned by CALIDAR PUBLISHING. All contents provided online or published either in print or digitally are protected under the copyright laws of the United States of America. All reproduction, release of digital files, and unauthorized use of these contents are prohibited without the express written permission of Calidar Publishing.

Home
Subscribe to: Posts (Atom)
Please use this button to complete private purchases or late Kickstarter pledges. Contact me on Facebook or Mewe if you have any questions -- Thank you!
Knights, dragon slayers, & bards unite... or not.