"Beyond the Skies" Goes Live 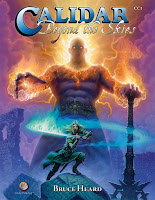 I'm pleased to announce that Beyond the Skies is now available for general sales on DTRPG, in all its hardcover glory!  It's been a long wait, but the final result is something to be proud of.  I hope you will share my sentiment.   (Click here for a peek at the book.)


Click on any of the images to get a copy of the new book.  Though the hardcover book can be purchased without its PDF file, I'd suggest selecting the bundle, which provides the digital copy for free with the printer version. 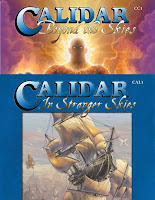 If you'd like to purchase Calidar's two printed books, In Stranger Skies and Beyond the Skies, there is a discounted bundle for this, including both PDF files.

Have fun, and do send feedback about the new book.  Thanks!

Email ThisBlogThis!Share to TwitterShare to FacebookShare to Pinterest
Labels: Beyond the Skies, Calidar, In Stranger Skies, Industry-Related, Kickstarter

In their own words:  "RPG Legend Bruce Heard joins us for a fascinating look at his roundabout journey from young game translator through running an entire product line for TSR to his current self-publishing projects with the World of Calidar.  As usual, we cover our current game-playing fun, and we also pester Bruce for a few war stories from the glory days of Mystara.  Oh, and Chris might have rolled his tongue back up.  Maybe."

Click HERE or on the image above.
at 2:48 PM No comments:

Email ThisBlogThis!Share to TwitterShare to FacebookShare to Pinterest
Labels: Calidar, Industry-Related, Mystara, Questions and Answers, Voyages of the Princess Ark

A major endeavor is getting completed at last!

This past Monday, I e-mailed to most of you your digital copies of CC1 "Beyond the Skies," CST1 "Under the Great Vault," and CST2 "Skies of Fury."  This covers the following backer pledges: Master, First Mate, Captain, and Admiral.  If you haven't seen e-mails from DTRPG, do check your spam box.  If you haven't received anything, contact me privately and let me know (use your Kickstarter account to send messages--that's probably best).  I can easily obtain copies of the download links, which I can e-mail you directly if need be.  Airman and Bosun backer pledges will follow in a few days.

Just a thought -- if you haven't created a DTRPG account yet, it would help in the future if you did.  Once you have an account, it's easy to access all previous downloads and file updates from there. Please do not post any of these documents online as free downloads or for whatever other reason. If you see any on the internet, do let me know. Thank you.

US Backers:  Your packages have already been mailed to you via USPS.  A few will come from DTRPG instead, as the result of damaged copies received from the printer, and which I've refused to dispatch "as is."  These last few have already been ordered from DTRPG, but will run a bit late (allow for a good ten days before seeing them).  Wisconsin residents have already received their packages (good job USPS!)  or probably will today.  A few more will get them directly from me at GameHole Con in Madison WI, this weekend.

Foreign Backers:  All your copies were ordered from DTRPG last week.  They will ship from the UK.  I've already received notification this morning that many of those orders (if not all of them) are already printed and are being shipped today.  Kudos to the folks working at the printer in the UK!   In Europe, allow for about a week or two before delivery.  Outside Europe (incl. Canada) allow for more time evidently.  Your autographed copies were dropped off at my local post office Saturday morning.  Your poster maps have also been delivered to the USPS, in many cases separately in a padded envelope (allow at least two weeks for delivery). 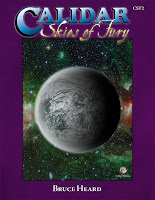 Promotional Booklets: If anyone who didn't order either of the promotional modules in their softcover printed version and now wish to do so, please contact me privately to make arrangements (use your Kickstarter accounts for messaging).  These two books, CST1 and CST2, are available exclusively to Calidar backers.  For those of you who are reading this and who haven't backed any Calidar project as of yet, but would like to get their hands on these two books, do not despair.  You can back the next project in the first half of 2017, "Dreams of Aerie," to qualify.

Final notes:  The softcover versions of CC1 "Beyond the Skies" and CAL1 "In Stranger Skies" will not be offered to the public, at least for the time being.  LSI, the printer, is changing their standard color paper to premium color, which is thicker and more expensive.  The backers' copies still use the standard stock.  I may or may not offer the softcover versions in the future, as they require new setup files, and evidently will come at a higher price tag.

The public release of CC1 "Beyond the Skies" is going to be delayed until last minute corrections are made to the text.  Backers have already been apprised of this issue via Kickstarter (check your messages there).  Hopefully, general sales will begin mid- to late November 2016.  Sincere apologies for the production hiccup.

Some of you may be eager to post pictures of your treasure troves online.  I'm all in favor of this.  If you decide to post a picture of your autographed page as well, please blur my signature or mask it somehow.

Thanks again for your support of CC1 "Beyond the Skies."  Your contributions made this project possible.  The next crowdfunding project will come during the first half of 2017, "Dreams of Aerie," which I mentioned earlier on this blog.

Email ThisBlogThis!Share to TwitterShare to FacebookShare to Pinterest
Labels: Beyond the Skies, Calidar, In Stranger Skies, Industry-Related, Kickstarter
Newer Posts Older Posts Home
Subscribe to: Posts (Atom)
Please use this button for private purchases, late Kickstarter pledges, or just beer money! Contact me on Facebook or Mewe if you have any questions -- Thank you!
Knights, dragon slayers, & bards unite... or not.