Calidar’s upcoming Series 3 project focuses on the elves. Barring unforeseen production changes, the author is pleased to announce the participation of Thorfinn Tait, master cartographer, and of Jeff Easley tentatively for the cover art. Joseph Garcia will provide internal illustration (b/w inks) and Janet Deaver-Pack line and text editing. Calidar gamebooks are intended for use with mainstream RPGs. As established in the two previous series, the new project will include:
Click here for the preview page on Kickstarter, and select the "Remind Me" button near the upper right corner. The launch date will be June 9, at 09:00 am CST.

The Queen’s Gift: As with previous releases, this campaign book’s opening chapter is a novelette running 18 pages. It is the third episode of the Star Phoenix adventures, a skyship exploring the Great Caldera. The story is told in the style of the Voyage of the Princess Ark originally published in Dragon Magazine in the 1990s. The Queen’s Gift features a mysterious living skyship.

History: The Gazetteer’s main body goes on to unveil the history of the elves, covering events in their ancestral moon, Alorea, and in the Confederacy of Alfdaín on Calidar itself, a former colony of Alorea. The history tells of a bitter rivalry between the old elven empire and the younger, independent nation. 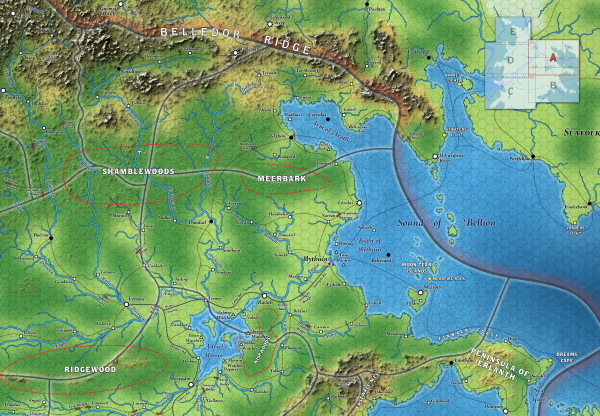 Geography: This chapter focuses on Alfdaín, describing the lay of the land, the people, the economy, and the region’s climates. More than 12 full-page maps are featured, including a monumental 9-page atlas based on Thorfinn Tait’s topographical artwork and an overview of Undersea, the world of the sea elves, along with a map of the marine floor.

Riddle of the Woods: A sinister event, care of the old empire’s nefarious machinations, corrupted some of the forests covering Alfdaín. The evil plot lies behind this magical plague, threatening to overtake the whole of the confederacy. Each tainted region’s effects receive a detailed description. 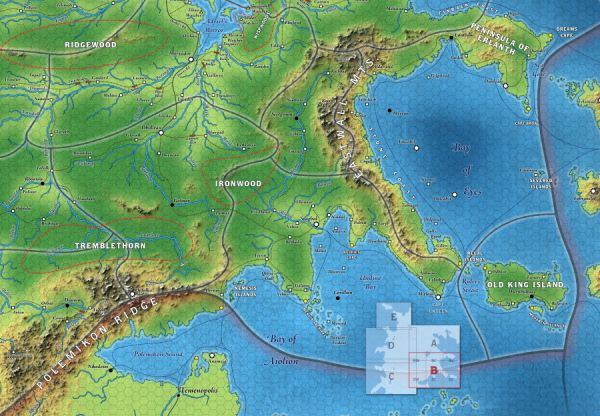 The Law and the Sword: Alfdaín features an alliance of three sovereign realms. Who holds the power in each dominion, how they interact with each other, what armed forces they possess, how the traditional clans work, and what laws are in effect comes through in these pages.