What Should I Start With?

Here is a complete guide to the World of Calidar as of April 5th 2020. As a newcomer to this fantasy world, you should start with Series 1 Meryath, especially its Gazetteer since it introduces the universe. 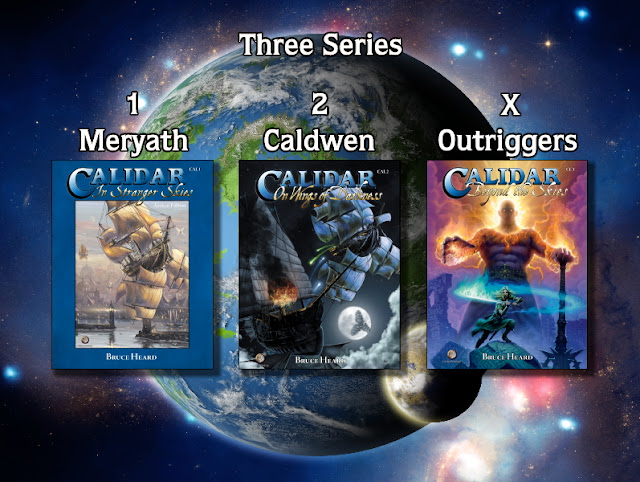 There are (so far) three distinct goups of books and poster maps. 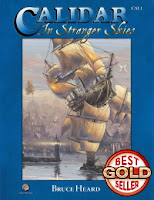 Series 1 concerns CAL1 "In Stranger Skies," the very first Calidar Gazetteer, and accessories directly related to the Kingdom of Meryath featured in CAL1. They can be recognized by their blue color scheme.

The last category, the "X" series labeled "Outriggers," includes all other accessories not directly related to the Gazetteers. Ideally, these products should bear a purple color scheme (future retrofit?)

There will be a Series 3 focused on the elves of Alfdaín and Alorea. Its titles will be structured exactly like those in Series 2: 1 Gazetteer (CAL3), 1 Players' Guide (PG3), 1 Adventure (CA3), 2 Conversion Guides (one each for Labyrinth Lord and OSRIC, therefore CAL3a & CAL3b), plus possibly a pack of poster maps. As you might guess, this series will get a green color scheme. 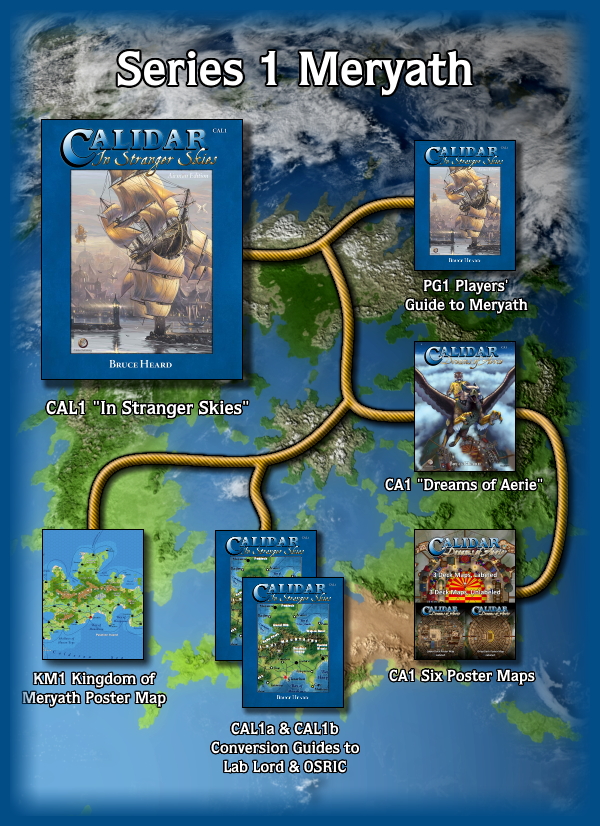 CAL1 "In Stranger Skies" is the very first Gazetteer anyone new with Calidar should get. It provides an overview of the universe, the main world, and the Kingdom of Meryath which is home to the Star Phoenix, the skyship featured on the cover.

PG1 "Players' Guide to Meryath" summarizes important info from the Gazetteer for the players. It provides guidelines on how to roll up characters, and delves more deeply into Calidar's epic hero narrative, a central theme to this world. At the time of this article, PG1 is being laid out in prepress as it was added retroactively to this series. It should see print May 2020.

CA1 "Dreams of Aerie" is a sandbox adventure on a multi-decked flying circus providing player characters with a  mobile "home base" from which to kick off future adventures.

CAL1a and CAL1b are Conversion Guides translating all game stats listed in CAL1, PG1, and CA1 for use with Labyrinth LordTM or OSRICTM. At the time of this article, these two books are awaiting final release on DTRPG. They were added retroactively to this series. They should see print around early late June 2020.

KM1 Kingdom of Meryath is a large 28" by 22" poster map. It is a limited edition printed outside DTRPG's sphere. It is available until stock runs out from the author's Facebook shop (US customers only; if outside the USA, please contact the author directly). 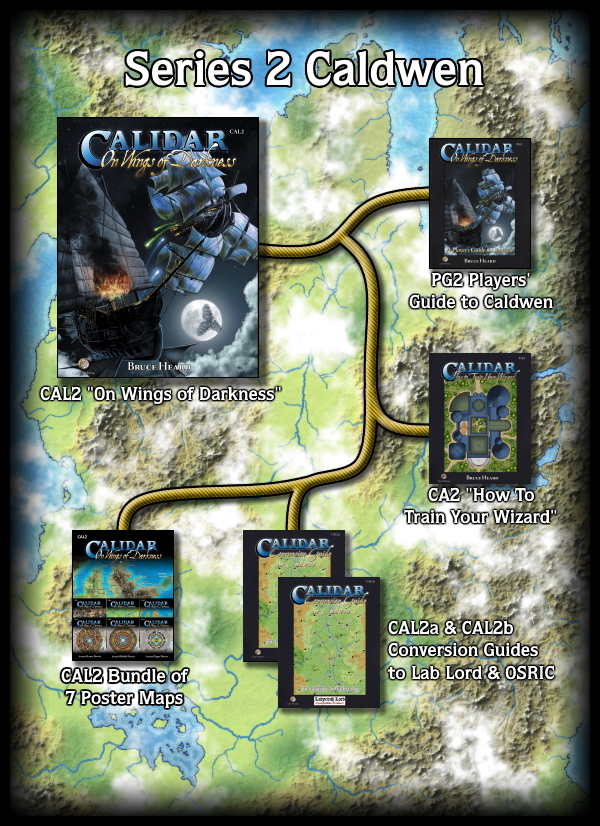 CAL2 "On Wings of Darkness" describes a realm of wizards and demons. Its theme covers schools of magic, a source of world magic, and of course, how to handle demons.

PG2 "Players' Guide to Caldwen" summarizes the Gazetteer's information for the players. It also features bloodlines, star signs, a new race related to demons, and a new character class of mage-knights forming an order connected with the source of world magic.

CA2 "How to Train Your Wizard" is the adventure for this series. It focuses on apprentices learning the trade of wizardry and necromancy. It provides a series of maps depicting the entire college, from dungeon to 12th floor.

CAL2a and CAL2b are Conversion Guides translating all game stats listed in CAL2, PG2, and CA2 for use with Labyrinth LordTM or OSRICTM. At the time of this article, these two books are at the printer. They should see print mid-April 2020.

CAL2 Seven Fold-Up Maps relate directly to CAL2. They display maps of Caldwen, topographic and hex styles, as well as street maps of the flying city of Arcanial and Port Arcana. DTRPG does not at this time support bundling books with fold-up posters because they are printed at different locations. 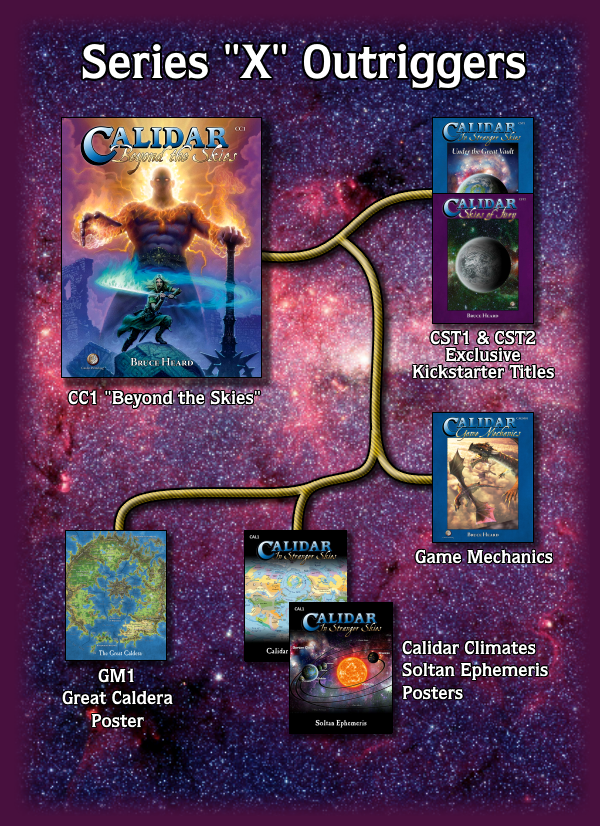 CC1 "Beyond the Skies" is a massive compendium of all things divine in the world of Calidar. It describes several pantheons of gods, game mechanics on faiths among mortals, running priest and shaman characters, divine favors and punishments, beliefs of the Dread Lands, demons, demigods, avatars, life after death, the netherworld, alliances among pantheons and deities, etc. CC1 is an invaluable sourcebook affecting all Gazetteers present and future.

Soltan Ephemeris is a single fold-up sheet showing an illustration of all planets orbiting the central star, Soltan.

DTRPG does not at this time support bundling books with fold-up posters because they are printed at different locations.

GC1 Great Caldera is a large 28" by 22" poster map. It is a limited edition printed outside DTRPG's sphere. It is available until stock runs out from the author's Facebook shop (US customers only; if outside the USA, please contact the author directly).

Home
Subscribe to: Posts (Atom)
Please use this button for private purchases, late Kickstarter pledges, or just beer money! Contact me on Facebook or Mewe if you have any questions -- Thank you!
Knights, dragon slayers, & bards unite... or not.