In the wake of producing OSR conversion booklets for Calidar's new Series 3 collection, it occurred to me that the mechanics to calculate monsters’ experience points are unnecessarily fiddly and not always clear. I took a closer look at the system presented in the Rules Cyclopedia, pages 127-128. The standard process involves two sets of numbers that should be added up. One is the basic XP based on HD, and the other a bonus that is multiplied by the number of the monster’s special abilities. To make matters worse, the chart ends at 20 HD. After tallying scores of those XPs ad nauseam I thought of an alternate and simpler approach. I also questioned the extremely low value assigned to special abilities of monsters with few or less than 1 HD. 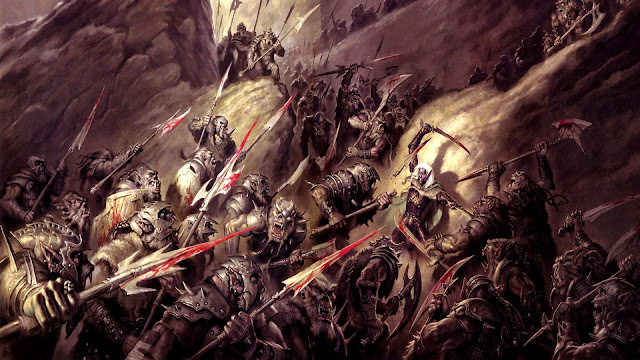 With this in mind, I came up with the idea of having just one set of values that could be multiplied directly by the number special abilities, plus one. So for example a HD ½*** creature would be worth 5 x 4 = 20 XP instead of the Rules Cyclopedia's mechanics calling for 5 + (1 x 3) = 8 XP. There’s a big difference but I don’t see this as a critical issue because, if anything, it enables low-level PCs to rise faster through the initial levels of play. Giving a 15 XP bonus for some tiny critter with, say, abilities like charm, poison, and some limited spellcasting, is somewhat better than just a lousy 3 XP bonus. Fortunately, this discrepancy gradually decreases to almost match standard XPs for 36 HD monsters.

You’ll notice the separate XP rows for “plusses” at levels 1-9 are now gone, again for simplicity. The extra XPs for special attacks more than make up for the deletion, at least in the long run.

Don’t forget that spellcasting awards one asterisk for each 2 spell levels that can be memorized. So a 3rd level spellcaster should get 2 asterisks. Use your discretion to add or remove asterisks based on relevance.

Clearly, experience is earned when heroes circumvent or otherwise deal with a monster in ways other than combat. I've been toying with a system that helps estimate experience rewards for accomplishing other goals. I've implemented this in the latest Calidar adventure module (and I'm hoping for some feedback on this). Here's the material from Adventures in Alfdain, a collection of short adventures easily portable to D&D BECMI:

Heroes earn achievement bonuses in addition to normal gains from combat and treasure. Awards are suggested at the end of each adventure. A Basic Reward amounts to 10% of the experience between a hero’s previous and upcoming experience thresholds.

Multiple Basic Rewards are often allocated to important adventuring goals, while minor ones may only yield fractions thereof. Use common sense and fairness when awarding these experience bonuses. Basic Rewards are allocated to each hero individually; they aren’t collective bonuses to be divided among survivors. Notoriety Points (NP) are also awarded in some of the adventures (see CAL1 pp. 86).

A few comments about the above: Some players may object to heroes earning the same percentage of experience (thus a wizard would progress up its advancement chart as fast as a thief). If this is the case, calculate a fighter's Basic Reward and apply it across the board. Generally speaking, if the players unlock all the Basic Rewards in an adventure, I make sure the bonus experience tops out at 50% of what the heroes need to level up. This comes in addition to experience earned from combat and treasure (if any). It ensures that PCs move up their advancement charts very quickly. After all, you do have 36 experience levels to go! As a DM, you can always tone down the number of Basic Rewards allocated to each adventure or how much each is actually worth (see examples below). This approach also makes adventures high on roleplaying but low on combat more appealing.
Notoriety Points are a feature of Calidar that doesn't exist in BECMI. It's a separate track enabling heroes to earn divine favors in exchange for cult expectations. This connects with attaining demigodhood eventually.
Here are some examples of Basic Rewards listed in Adventures in Alfdain:
Adventure A: For each goal accomplished, each hero earns a Basic Reward. Goal #1: Seeing Nella and her barge to their destination. Goal # 2: Exposing Master Gabbot as a criminal. Goal #3: Handing Gabbot to the local militia. Goal #4: Any hero who consistently acted with creativity, panache, swagger, and daring in the face of adversity.
Adventure B: 1. Finding the nut (Basic Reward x2). 2. Enabling Arla’s capture (Basic Reward). 3. Handing the nut to Dialla (½ Basic Reward). 4. Capturing Arla’s crewmates (¼ Basic Reward for every 5 prisoners). 5. Returning Luriel’s compass to Dialla (¼ Basic Reward).
Adventure C: 1. Newán is killed (Basic Reward). 2. Newán is taken to Corellion (1 Notoriety Point + Basic Reward x2). 3. The heroes enable Newán’s escape (Basic Reward). 4. Newán is taken to Seághal (Basic Reward x4). With outcomes 1 or 2, heroes earn a +2 Cha bonus with Clan Melwë and a –2 with its rival. With outcomes 3 or 4, Clan Ilmarëan secretly compensates the heroes for their uncollected bounty; the heroes also earn a +2 Cha bonus with its people and a –2 with the other clan. Disgruntled clans may seek retribution against the heroes later on.
Adventure D: 1. Delathien is freed: all wounds are healed; heroes afflicted with the forest’s dreaming torpor are awakened (3 Notoriety Points + 1 Divine Favor + Basic Reward x3). 2. Alzeborath is slain (2 Notoriety Points + Basic Reward x2). 3. Alzeborath flees without the amulet (1 Notoriety Point + Basic Reward). 4. Heroes retreat: after challenging the fiend, they vow to return after earning more experience (½ Basic Reward).
Etc. You can see it's pretty flexible.  That's it for today’s pet peeve!
at 9:59 AM No comments:

Email ThisBlogThis!Share to TwitterShare to FacebookShare to Pinterest
Labels: Dungeons and Dragons, Game Mechanics
Newer Posts Older Posts Home
Subscribe to: Posts (Atom)
Please use this button for private purchases, late Kickstarter pledges, or just beer money! Contact me on Facebook or Mewe if you have any questions -- Thank you!
Knights, dragon slayers, & bards unite... or not.