I completed a YouTube presentation video of the seven poster maps for use with the upcoming #Calidar gazetteer CAL2 "On Wings of Darkness," due for public release late June/early July 2019 at DTRPG.

CAL2 "On Wings of Darkness" is part of the #Calidar fantasy game world. All seven poster maps are shown in this video:

The core gazetteer is due for release at the same time, along with its players' Guide, PG2 "A Players' Guide to Caldwen." An adventure book is in the works, with an expected completion date circa Christmas 2019.

EDIT -- I found out that the blog's version of the video is blurred when enlarged to fullscreen scale. The original on YouTube is much sharper.
at 11:42 AM No comments: Links to this post

As the number of Calidar titles is starting to grow, time has come for a show-and-tell exercise. The idea is to clarify which titles go together. Most of what was produced for Calidar was released either as a Kickstarter fulfillment or to the general public via DriveThruRPG.com. DTRPG does not support a way to organize all the titles in a convenient, intuitive manner, at least as far as the author would wish. Fold-up maps cannot be sold as part of their related gazetteers either, which compounds the issue of Calidar's somewhat organic growth. This article helps understand how Calidar is structured, and how future releases are likely to be organized, upcoming Kickstarter successes permitting.

To begin with, we have three core products. The very first that any prospective fan should consider is CAL1 "In Stranger Skies." It introduces readers to the Calidar universe as a whole. It provides the first episode of the Star Phoenix story: a skyship traveling the world. CAL1 also offers a gazetteer describing the the Star Phoenix's home base: the Kingdom of Meryath, a land of adventurers and glory seekers. 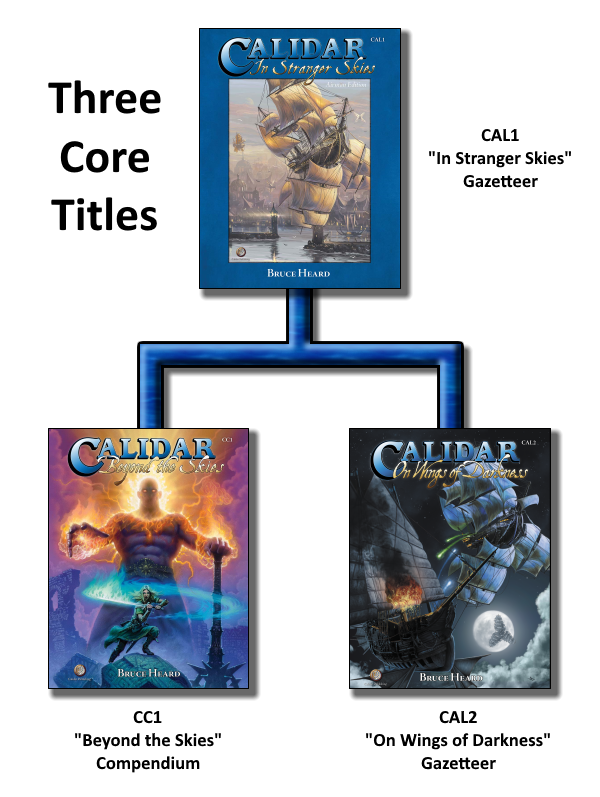 CC1 "Beyond the Skies" was published in 2016. Adding up to 248 pages, this compendium is packed with information about Calidar's cults. Settlers came from different worlds involving multiple races and cultures, each with its own divine pantheon. That's a lot of gods! At the threshold between mythology and ancient Calidaran history, CC1 goes on to tell the story of each deity, describing the politics between gods, and the powers granted to their mortal followers. A look at the outer planes and their denizens is also included, as well as shamanism in the Dread Lands and its relation with seitha.

CAL2 "On Wings of Darkness" is the second 132-pg. gazetteer, due to be released to the public around late June/early July 2019 via DTRPG. It describes the magiocracy of Caldwen, focusing on the relation between wizards and demons. It also provides the second episode of the Star Phoenix story started in CAL1. The initial concept behind these ongoing tales originated in the author's earlier works known as the Voyage of the Princess Ark, originally published in the Dragon Magazine in the 80s and 90s, each issue providing a new episode followed by the description of a new setting. 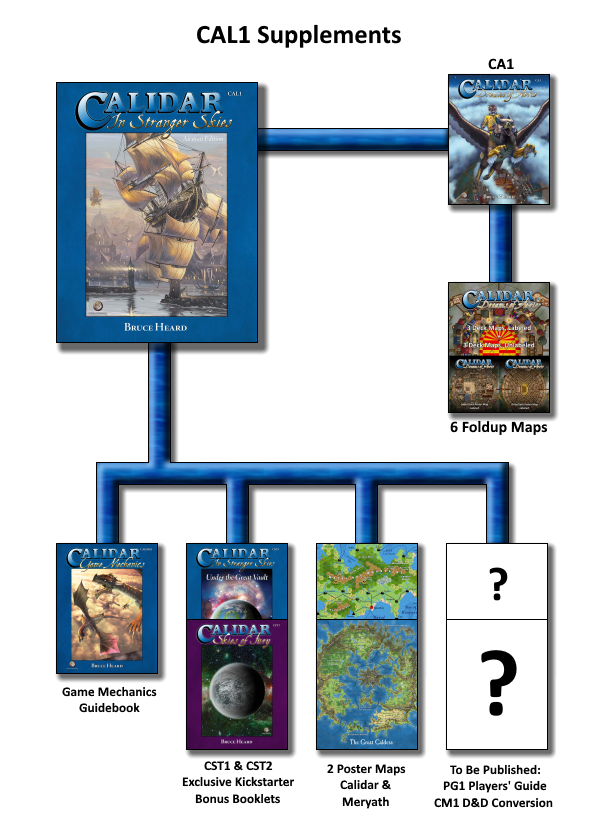 Published in 2017, CA1 "Dreams of Aerie" is a 132-pg. adventure taking place on a flying circus. Although this sandbox adventure can be run in any game world, it is connected by default with CAL1 since it travels the whole of Calidar. The flying circus includes three decks described in great detail in the book, along with the residents. Three fold-up maps, 12"x18" (30x45 cm) display these decks; labeled and unlabeled, the printed sheets are available on DTRPG as a bundle (digital files are not offered).

Calidar does not use any specific RPG. Nonetheless, a simple system helps express game stats that should be easy to convert into mainstream roleplaying games. The Game Mechanics Guidebook defines the method behind Calidar game stats. This 12-pg. booklet also gives a short overview of Calidar and a map of Meryath. It is a pay-what-you-want item on DTRPG available to anyone.

CST1 "Under the Great Vault" and CST2 "Skies of Fury" provide "prequels" to the Star Phoenix story, along with adventures and other background material. These two 60-pg. booklets are offered exclusively to past and upcoming Kickstarter backers.

Two poster maps, GC1 "Great Caldera" and KM1 "Kingdom of Meryath," had been printed at the same time CAL1 was released. The Great Caldera is rendered in the magnificent topographical art style created by Thorfinn Tait.  Kingdom of Meryath uses a hex grid and stylized symbols in the style of the D&D Mystara maps of the 1980s and 1990s.  Both are 22"x28" (55x71 cm), printed on non-gloss paper and folded. Unavailable through DTRPG, they are, however, listed on Calidar's alternate shop page, on Facebook. Otherwise, contact the author directly to acquire these posters. Unlike print-on-demand titles, they are limited print runs which will run out of stock at some point.

PG1 "A Players' Guide to Meryath" does not yet exist!  The opportunity to field players' guides came up in the wake of the brilliant performance of CAL2's Kickstarter in the fall of 2018. As a result, there is now a PG2 supplement and, therefore, a PG1 should follow some time in the future. Blame it on organic game world development.

CM1 "D&D Conversion Manual to Meryath" is a tentative idea that came up after CA1's release--thus, not yet in existence. The goal is to provide a listing of game stats from CAL1 converted to the present D&D Game specifically. This will involve an OGL agreement. The question remains on whether this could also cover the Basic D&D Game (BECMI) and other versions. CM1 would  be offered in the same manner as the Game Mechanics Guide described earlier, either a free PDF or an inexpensive print. 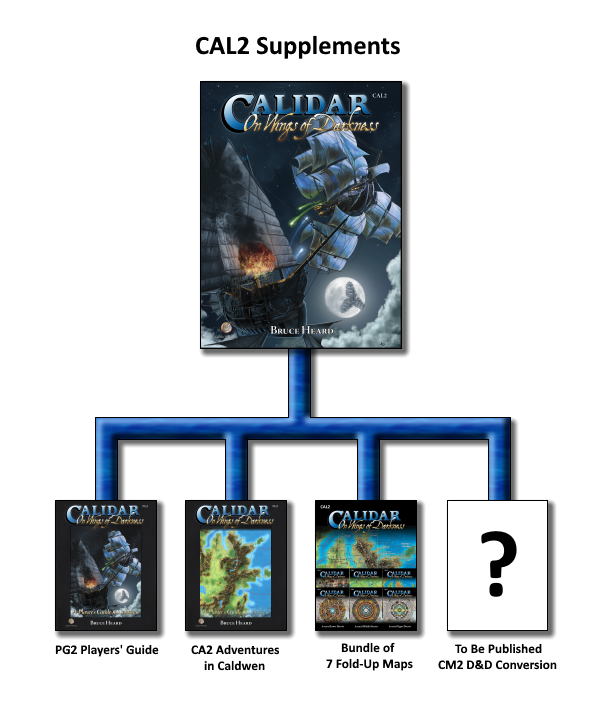 Provided upcoming Kickstarters prove as successful as the latest one, the supplements shown above should become the standard fare for core Calidar gazetteers: 1. a players' guide, 2. a book of adventures, 3. a bundle of fold-up maps, and possibly 4. a conversion guide.

PG2 "A Players' Guide to Caldwen" is an 18-pg. booklet, saddle stitched. It is scheduled for release in late June/July 2019 along with the core CAL2 gazetteer and the bundle of fold-up maps.  It provides an overview of the land and its people, what people say about the magiocracy, a travel guide, a summary of Caldwen cults, a new PC race, a new character class, an overview of the schools of magic, and a quirky glance at PC ancestries and their astrology.

CA2 "Adventures in Caldwen" (how creative, right?) is a 64-pg. booklet, perfect-bound, that offers various adventures in the magiocracy. At the time this article is posted, yours truly is writing the first adventure: How to Train Your Wizard, focusing on Caldwen's school of Necromancy. Release date: officially "some time in the future," unofficially late 2019 or early 2020.

CAL2 Map Bundle: includes seven fold-up maps, 12"x18" (30x45 cm). These will be available when the core gazetteer is released to the pubic. These maps include the following: a referees' map to Caldwen in the beautiful topographical art style created by Thorfinn Tait, a players' map using a hex grid and stylized symbols in the style of the D&D Mystara maps (10 miles per hex), the "Valley of Arafor" which is close-up view of the area surrounding the capital city (about 2 miles per hex), a street map of Port Arcana (a slum beneath the flying city of Arcanial), and top views of Arcanial's three districts. Where space permitted it, additional floor plans were included as well as a side view of the flying city. Though not indispensable, the bundle of maps is nonetheless priceless when running a game or trying to describe any of the contents to players. The printed sheets will be available on DTRPG (digital files are not offered).

CM2 "D&D Conversion Manual to Caldwen," as described earlier for CM1, is not yet scheduled for release. It is a tentative idea for a listing of converted game stats from the core gazetteer, for use with the present version of the D&D game and possibly others. It would be a free or low-cost title listed on DTRPG.

What Else? Other potential items on the author's "to-do" list: game mechanics for skyship construction and combat. Ideally, release could be coordinated with a miniatures manufacturer. The next Calidar gazetteer could focus on the elves of  Alfdaín, with a glance at their homeworld of Alorea; another option concerns the dwarves of Araldûr, with a glance at their homeworld of Kragdûr (no big surprise here!) Another contender is the Empire of Ellyrion, with a glance at their ancestral moon, Munaan, and Nicarea. Farther in the future, there could be a gazetteer for Lao-Kwei, its moon Kumoshima, and the mysterious Kahuulkin race. Somewhere beyond the horizon lies a Ghülean gazetteer, with a closer look at... what no one should ever gaze upon. I'm still hoping at this time that DTRPG will come through with the ability to produce larger poster maps; there's no clear outcome on this as of yet.

These are all big projects. Thanks for your patience and support all these years since CAL1's release. If you want the latest news about Calidar and regular sneak peeks, join the Calidar chat group on Facebook. Your feedback is always appreciated.
at 2:33 PM 6 comments: Links to this post

Email ThisBlogThis!Share to TwitterShare to FacebookShare to Pinterest
Labels: Caldwen, Industry-Related
Newer Posts Older Posts Home
Subscribe to: Posts (Atom)
Please use this button to complete private purchases or late Kickstarter pledges. Contact me on Facebook or Mewe if you have any questions -- Thank you! Ride the Flying Circus Join if you dare!