D&D Class: The Custodian, Pt. I

This is perhaps the strangest idea for an NPC or, possibly, a PC if one’s tongue remains firmly planted in one’s cheek. The idea grew from a joking comment after I posted the link to the other character class I blogged about recently: the Librarian. This latest one may be particularly relevant to OSR fans. So, what is this so-called custodian, really? 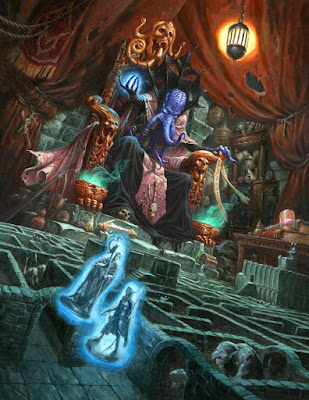 This character class’s goal is to secure mystical ascendancy over dungeons in order to earn residual experience and special powers. Ultimately, the custodian seeks to turn into a spirit imbuing one or more lairs. Custodians aren’t necessarily malevolent, but more like landlords of a remarkably unusual nature. Though these characters may be thought malevolent, a neutral stance will do fine or, for the sake of DMing schemes, a benevolent one could prevail just as well over mausoleums and hallowed sanctuaries. The custodian can either be a magic-user’s subclass or a cleric’s. Both versions are given here. They share the same core powers in addition to their spells and normal class-related abilities. From design and game balance points of view, custodian spellcasting talents are more limited than that of conventional character classes (the approach is similar to the Librarian’s design mentioned earlier).

Ascendancy Mechanics: Adventuring custodians accumulate ascendancy over the “dungeons” they explore while defeating their traps, riddles, monsters, and seizing plunder. There is no limitation to the number of separate dungeons where ascendancy can be earned. Ascendancy, however, only relates to the locations where it was earned; therefore, each location requires a separate tally.
Accumulated ascendancy is equal to experience points personally awarded to the custodian for his/her normal adventuring endeavors. MFF mechanics (also known as the DM’s Major Fudge Factor) are in effect at all times to prevent adventures from going out of control. However vehement players’ objections, MFF mechanics always apply.

Dominance Mechanics: Dominance can be achieved any time after a custodian’s ascendancy exceeds two thirds of the total experience point value* of the targeted dungeon ([*] or whatever total the DM sets by dint of MFF mechanics). A dungeon's xp value is the total amount of experience that adventurers can possibly earn from its many challenges. The custodian’s player decides if and when to establish dominance after conditions have been met. From the moment of domination onward, the custodian retains 10% of all xp earned at this location by adventuring PCs/NPCs or by monsters opposing them (see DMing Sanity, later).
The number of dungeons that a custodian can dominate is limited (see Advancement Table). This may motivate a powerful custodian to relinquish all ascendancy over a less desirable location in favor of dominating another with more potential. Once achieved, domination is permanent until one of the following happens:
Custodians can no longer earn experience from pilfering leftover treasures or from personally defeating occupants and features of dungeons over which they’ve established dominance. Completely eliminating a dungeon’s occupants, traps, treasures, enchantments, and features of interest does not break its custodian’s dominance. Other monsters, NPCs, or PCs will move in at some point in the future, bestowing a new xp value to the dungeon and generating new residual experience for its custodian.

More than one custodian may simultaneously endeavor to accumulate ascendancy over the same place, but only one can achieve its dominance. Dominant custodians can always sense if a challenger is actively earning ascendancy over their dungeons.
Some of the special powers described in Part II of this article require “cashing in” accumulated ascendancy (see in particular F. Blood Levy and H. Power Levy). Cashing in can only be done while in the dungeon where ascendancy was accumulated. It is the only way a custodian’s ascendancy can actually “drop,” possibly enough to break dominance. If so, ascendancy must be regained based on the present dungeon’s xp value which may have grown since domination was originally secured. A dungeon whose current xp value outgrows its custodian ascendancy does not break domination, but any drop in ascendancy may instantly result in the same. Residual experience earned from domination isn't added to the custodian's ascendancy total.

Dungeons: This general term designates any clearly delineated site conducive to adventuring. This includes places like a building of some kind, one or more nearby ruins, a burial site, a monster lair, an underground network (i.e. a “dungeon”), a shipwreck, a section of sewers or catacombs beneath a city, etc. Urban areas, outdoors settings, and places meant to support a single encounter typically do not qualify. The maximum size of the “dungeon” depends on the custodian’s experience level (see Custodial Ranges below); over the years, therefore, the extent of a custodian's domination over a location may grow without requiring additional ascendancy over new monsters and treasures now falling within range.

Custodial Ranges: The Advancement Table specifies the maximum dungeon size (in feet) that a custodian can dominate, followed by the size of the area (in miles) within which multiple dungeons can be dominated. For example: at first level, a custodian can dominate one dungeon extending up to 180’ from the custodian’s original point of entry; a few levels higher the custodian could dominate at most three dungeons, each one up to 330’ from its original point of entry, all lying within 4 miles of each other.
Size Limitations: If a selected dungeon is larger than allowable, parts of the dungeon beyond range will not be under domination until the custodian earns enough experience levels to cover the entire site.
Area Limitations: Accumulating ascendancy in a dungeon that’s out of range (in miles) is always possible, but to achieve domination there the custodian may have to relinquish one or more other dungeons in order to make sure they all lie within the allowable distance from each other.

Custodian Motivations: It is assumed that custodians remain quiet about their ascendancy over various places, lest nearby residents or rival custodians come after them. Some may spread rumors and legends about a dungeon, contrive to build new sections, or even outfit adventuring expeditions, all with the ultimate goal of attracting not only adventurers but also monsters. Their goal is to create ongoing conflicts from which they earn residual experience, hopefully resulting in an ever-lasting status quo. Others may view their custodianship as divinely ordained quests. Benevolent custodians earn their experience to help protect sacred places, using their special powers to “stock their dungeons,” as it were, and make them increasingly difficult to defile. What about a custodian whose purpose is to "train" unwitting heroes for some greater purpose (divine quests for immortality, a centuries-spanning crusade, etc.), an alien scientist studying concepts of violence and greed, or even an eccentric bard in search of fabulous tales? In their own ways, these could be seen as NPC Dungeon Masters. I could think of situations where custodians may also be the witnesses of great crimes, and as such, priceless plot devices.

DMing Sanity: It is entirely conceivable that a PC custodian will establish dominance over multiple dungeons. Trying to quantify how much monthly experience each would generate without actually running adventures there is the stuff of pipe dreams. MFF mechanics are essential here. In short, the custodian earns 10% of each dungeon’s original domination score each month (provided it isn’t completely unoccupied). Add 5% for each new experience level attained thereafter.
Roll 2d4 (or DM’s discretion). The result is the number of months that go by before having to make a Fate Check. The result determines the fate of a dominated dungeon (one, randomly chosen). Roll percentiles for the Fate Check. The custodian senses these results:
Challenges from rival NPC custodians should be expected (at the DM’s discretion), especially with Fate Checks of 76 or higher. It is their preordained destiny that dungeons should end up being plundered, as the nature of heroic fantasy games suggests. Direct intervention from the custodian through conventional DM-run adventuring can help restore looted dungeons and enable face-to-face confrontations with rival custodians.

The three columns on the left of the Advancement Table (see below) show experience levels for different RPGs. They all range from Level 1 to the level at which conventional magic-users become able to cast a 9th level spell in all three game versions (printed in red in the table). Scale A is for BECMI (9th level spells are available to 21st level magic-users), Scale B is for AD&D 1st and 2nd Editions, and Scale C is for D&D 5e and Pathfinder. Experience points at each level are those listed for magic-users in the chosen RPG. This ensures that this character class compares roughly equitably in all game versions, based on what spells they are able to cast (not so much on experience points themselves or the ease at which levels can be earned).
Use whatever experience points are listed for each level in the chosen game systems. Clerical custodians cast clerical spells as if one experience level lower than current (i.e. no spellcasting at first level). Both magic-user and clerical custodians retain their original class abilities (such as cantrips, if any, or Turn Undead abilities).

Check custodial powers in Part II of this article!
at 6:17 AM