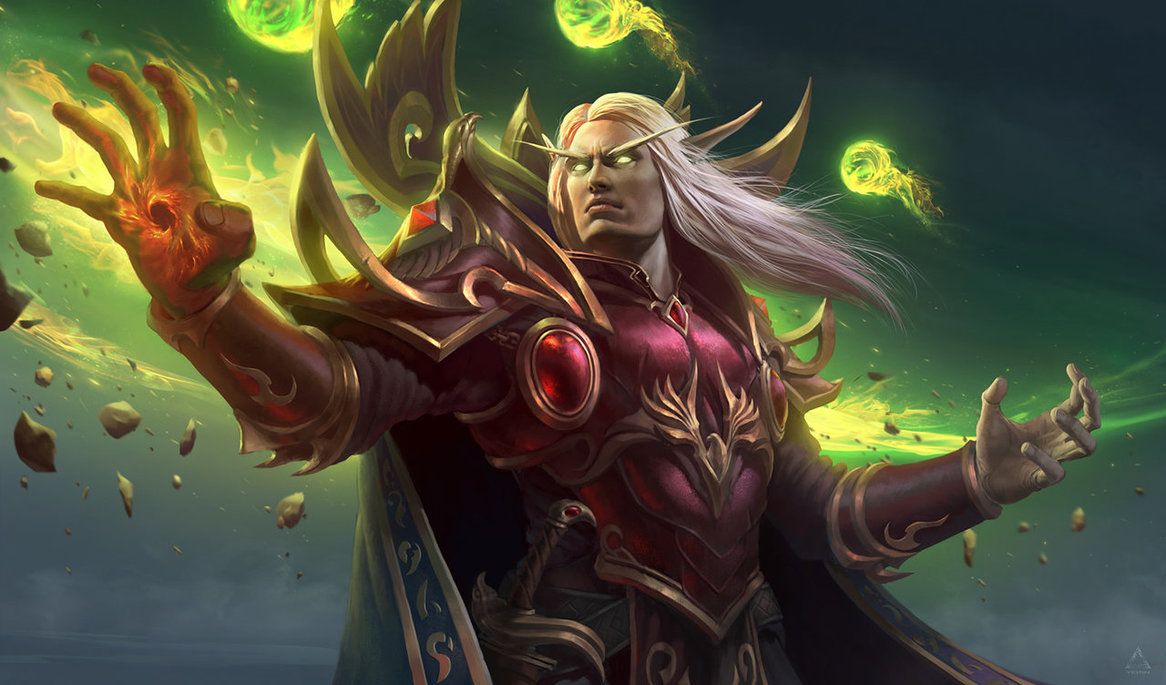 Following the previous article and logical questions from readers, here's my attempt at tinkering with elves. The original goal was to make a few more spells available to low level characters. This was easy enough with magic-users and clerics. Elves (as described in the D&D BECMI rules) are decidedly more problematic. In the standard game, elves are "kinda/sorta" limited to 10th level. This never made sense to me, and it looks pretty awkward. In the optional rules introduced in the RC, page 266, level limitations are done away with, and elves are enabled to acquire spells at the same rate as human magic-users. I didn't like this either, given that BECMI elves are basically a hybrid fighter class. Should they obtain as many spells as specialized magic-users? Maybe not. That's a lot of variables. Let's first have a look at how elves compare with the magic-user and fighter classes.

Saves: The elf's saves are way better than either the fighter's or the magic-user's. They bottom out at 2 starting at 10th level. RC's optional rules do not alter this, so from 10th to 36th level, the elf saves with just a 2 or higher on a d20. Hmm...

XPs: Ouch. The fighter needs 2,000 XP to reach level 2. The magic-user needs 2,500. The elf needs 4,000. Though I understand the logic, I think that's a bit much since the elf isn't as good as a fighter and is limited in its experience levels. It's not much fun trying to level up these elves either.

Spells: In the standard rules, the elf acquires spells like magic-users, but is limited to 5th level spells. In the RC's optional rules, there's no limitation.

Conclusion: The elf isn't quite as good as a human fighter with standard rules. With the RC's optional rules, they get worse. Saves in the RC's optional treatment are downright goofy in my opinion. XPs are a pain to deal with either way. Since the elf isn't supposed to be as good as a specialized fighter, why then should the elf be as good as a specialized magic-user? I'm sure everyone has their own opinions on the matter. If the elf were as good as either class in every way, then 4,500 XP would be needed to reach level 2 (F 2,000 + M-U 2,500 = 4,500 XP). I'm definitely not going there! I'd like to suggest a hybrid solution that takes all the above factors in consideration.

"Alternate" Elf with Extra Spells and no Level Limitation 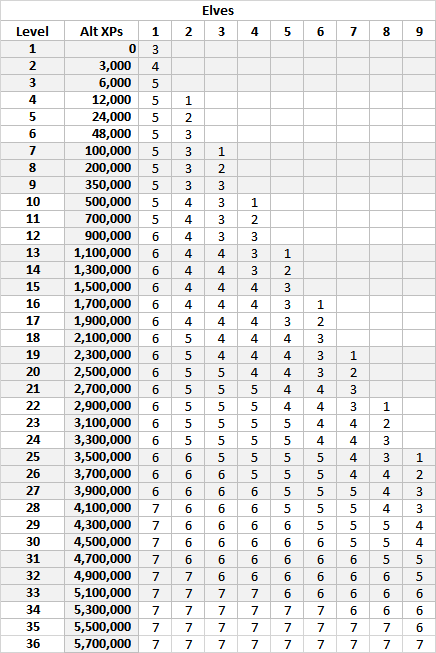 As a first step, I toned down the XPs needed just a tad, especially at the first few experience levels. I personally never played at the really high levels that BECMI offers, and I don't know of a whole lot of players who have either. So, I'm not going to worry an awful lot about anything higher than levels 15-16.

Base Hit Dice remain a d6, with +1 hp per extra level above level 9. Use the Cleric attack table and saving throws.

For spells, I went with a completely different scheme, following the idea that: 1. More spells are needed at low levels; 2. Elves just aren't quite as good as specialized magic-users (compare with the previous article).

As a consequence, I reduced the maximum number of spells elves can get at level 36, and also increased experience requirements to earn higher level spells. The effect of this is somewhat lessened by the lower XP progression at lower levels. An elf earns its first 9th level spell at level 25 vs. level 21 for a specialized magic-user. That is to say that the elf suggested above needs 3.5 million XPs for that first 9th level spell, vs. 2.1 million for the magic-user (vs. 3.3 million suggested in the RC's optional rules).

Consequently, the elf suggested above has no hard limitations compared with the two versions given in the RC, has more spells to start with, but does not compete directly with either the fighter or the magic-user classes. It's a hybrid solution for a hybrid class.

Edit: The Revised Thief Class is up. Click here for details. You can also find a more-recent article updating the elf's level progression. Click for the latest.