Here's a short entry for today. While designing a flying city, I ran across an issue concerning fear of heights for characters standing at the edge of a cliff, following a narrow mountain path, walking a tightrope or a plank, or climbing a ship's mast or a wall,  and potential effects on these characters. Here's an approach. What are your opinions on the matter, as referees or players?
Most RPG heroes aren’t initially designed to account for fear of heights. Rogues, career skyship crew, residents of places like flying cities, flying creatures, cathedral builders, gods, most animals, and monsters in general are immune to it. Other beings, however, may be susceptible. Roll an initial Wisdom Check for each player character; the level of failure indicates whether a character is predisposed to fear of heights, and the severity of the condition.

If a character is susceptible to fear of heights and faces a situation that could trigger its effects, such as approaching a cliff’s edge, looking over a skyship’s railing, climbing a mast, crossing a rope bridge or a gangplank (etc.), a Wisdom Check should be required. Characters terrified of heights receive a –2 penalty to these checks. Results remain in effect for the remainder of the encounter.

Thieves and mystics (monks), if not immune, ought to have a bonus on both the initial roll and the following checks (if any), probably equal to their Dexterity bonuses. Fear of height is a condition that can be healed temporarily with a cure disease spell, or permanently with a cureall (D&D BECMI) or a heal spell (AD&D).
at 7:28 AM No comments:

A Glimpse at Arcanial, Pt. 3 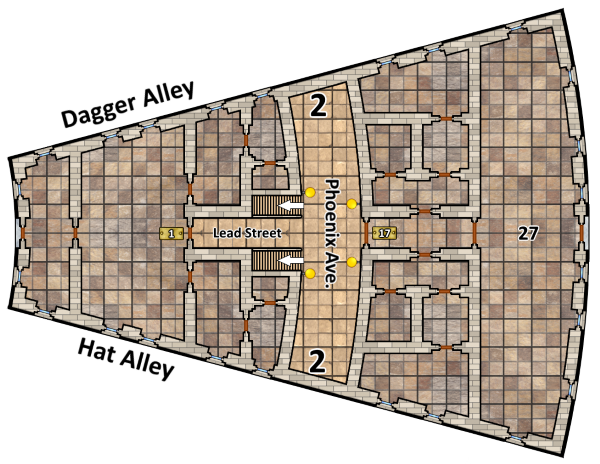 Temple of Ashgaddon
Phoenix & Lead (№17)
This religious shrine is one of several on this floor. Located at the intersection of Lead Street with Phoenix Avenue, the main entrance opens on an elegant 40’ long colonnade leading to the sanctum. Another door leads outside, facing the Outer Gauntlet. Eight chambers used for meditation, private services, office work, vestry, storage, and acolytes’ quarters straddle the colonnade. About 40’ by 140’, the sanctum enjoys a magnificent vault soaring nearly 70’, reaching as high as the Upper Griffin. The temple’s cross-section can be seen on the side view diagram (see below). 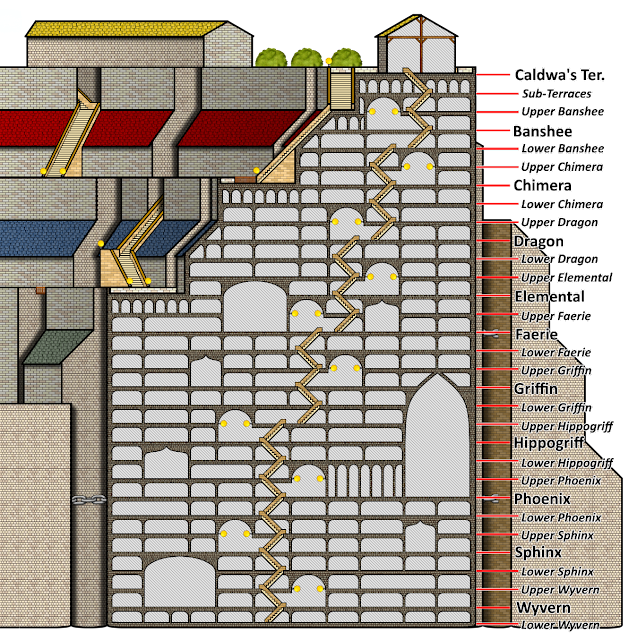 Clad in black marble, the sanctum’s walls and floors give an impression of organic worm-like movement. Only stirred by the slow swing of a large bronze thurible, dimness veils the vault’s upper reaches. Careful observation might reveal the presence of wraiths drifting in the darkness above, the lingering forms of disciples felled in the service of their god.
A statue of Ashgaddon stands in the sanctum’s middle, facing toward the main entrance. At each of the chamber’s two ends stands a 10’ wide bronze vat with a few steps to reach its rim. Visiting faithful drop a few drops of blood into it, which turn into red maggots. By end of day the crawling, glistening mass fills the vat. After sunset, acolytes, priors, and visitors all leave, and the doors are carefully locked. Only when all falls as silent as a tomb, do the wraiths descend upon the vats and gorge themselves with the Life Force so generously proffered. The cycle resumes at sunrise.

The cult’s grand prior visits this temple when one of the wraiths grows powerful enough to serve Ashgaddon as a Celestial (see Divine Servants, CC1 pg. 211). The ritual sends the former wraith to Navuut-Karkerath, the god’s domain in Sadarya. The temple’s prior can summon the wraiths to defend the sanctum against defilers.

A Glimpse at Arcanial, Pt. 2 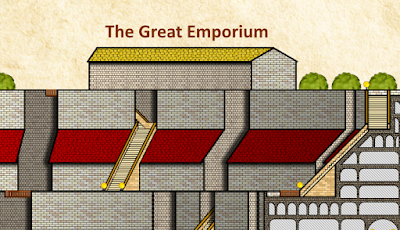 The Great Emporium
№2 Caldwa’s Terraces.
This multi-level, high-end store sells all manners of luxury items of interest to magic-users, from practical but jazzed-up everyday tools of the trade to the weirdest doodads, all at extravagant prices but with a solid warranty and excellent return policy. Empty grimoires, smooth scrolls, rare inks, fine wand wood, spellcasting components, ornamental stones and gems, pearls, rings, pointy shoes, hats, robes, and cloaks, feathers, fancy masks, carpets, furniture, laboratory equipment, flasks, trick chests, decorative sarcophagi, wax dolls, scented candles, lamps, Lao-Kweian incense, Munaani myrrh, Kumoshiman chopsticks, talking fish trophies, and reams of magic items (locked in glass cases—please ask for help for the latter) are some of the goods available if the gold is right. An entire aisle is devoted to wizardly socks—sober, garish, or merely elegant, anything from mundane hosiery to exotic weaves can be found.
The entire edifice is enchanted to prevent not-so-honest clients from walking away with unpaid articles, causing the latter to be returned to their shelves and the former to a holding cell down on the Wyvern. Two dozen watchful faeries sporting the emporium’s green and silver livery provide discreet but efficient customer service. Two large gorilla-shaped golems sternly stand by the exit, next to the registers in case of trouble there. If needed, the store’s faeries can awake them and lead them to a shoplifter.
The business owner, one Gabbie Glittamax previously known as Maddie Magpie before she moved to Arcanial, owns the distinguished establishment. This crafty gnome started her business with a small shop in the Lower District, and gained notoriety during the past decade, being particularly skillful at getting what her clients were looking for. Nearly anything can be obtained if the price is right. Gabbie handles private negotiations and special orders in her office, on the sub-terrace floor. Warehouses, workshops, and break rooms, reach as far down as the Banshee.

Gorilla Golems (2): AR 20, Monster LF 28, MV 180’ (60’), TA 2 fists, DR 2M/2M, DC as monster; Size L (7’tall)—Str 106, Agt 89, Dex 50, Sta n/a, Int 50, Wis 44, Per n/a, MR 100, PH H*/M*/S*
Abilities: These golems are made of flesh and bone. They can easily climb walls and detect invisibility. They are immune to non-magical weapons, and electrical attacks heal combat damage. After first suffering a wound, they thump their chests; their next two attacks receive a +3 bonus to hit. With two successful punches, gorilla golems can slam shoplifters on the floor, stunning them for 2d6+2 combat actions, drag them back to the store’s register area, and pin them down until the city militia can intervene.

A Glimpse at Arcanial, Pt. 1

While detailing #Calidar's flying city of Arcanial, I decided to post previews here for your enjoyment. Arcanial includes three big districts, one levitating above the other and slowly rotating in opposite directions. The next several entries I'll be posting on this blog are taken from the Middle District. This section of the city is roughly arena shaped, with "alleys" cutting through to enable gondolas and freight barges to fly past the city blocks. Beneath a series of concentric terraces lie up to 30 floors crisscrossed with streets and staircases, as well as wormhole-like portals enabling foot traffic to flow seamlessly across intersecting alleys. Individual quays and doors on each floor allow passengers on/off flying gondolas.

Lower Chamber of the Sorcerers
№1 Caldwa’s Terraces.
Nearly 120’ long by 40’ wide and with an ornate ceiling arching 30’ high, the Great Hall accommodates sorcerer officials from all parts of the magiocracy. Seen from the inside, the ceiling looks cathedral-like, as if it reached 90’ high, the result of an elaborate illusion. The front door is purely decorative: it is in fact a wooden carving with no moving parts. An enchantment enables members and chamber officials to pass through this ceremonial gate. Wooden statues of illustrious sorcerers long ago departed look down upon the Great Hall. They animate and attack anyone interfering with parliamentary sessions.
These facilities extend several floors lower, offering meeting rooms, private cabinet chambers, sitting rooms, an indoor docking hall, offices, and the Chamber’s archives. Parliamentary guards, known as Bee-Feeders (they collected honey from bee hives to help impoverished sorcerers long before Arcanial was sent aloft), keep a careful watch on all who come and go. Lesser individuals in the Chamber’s employ, messengers, and other visitors enter through another doorway three floors beneath the terrace. Facilities on the lowest level house a guard post at the entrance and the indoor docking bay facing Outer Artifact Alley. Private stairs connect lower floors to the Great Hall.

Email ThisBlogThis!Share to TwitterShare to FacebookShare to Pinterest
Labels: Caldwen, Calidar, Cities
Newer Posts Older Posts Home
Subscribe to: Posts (Atom)
Please use this button to complete private purchases or late Kickstarter pledges. Contact me on Facebook or Mewe if you have any questions -- Thank you!
Knights, dragon slayers, & bards unite... or not.