One of Meryath’s iconic hero is the dragon slayer. A character class is presented here, which can be adapted to various mainstream RPGs. These specialists are members of the Guild of Dragon Slayers, from which they obtain training and general support (see CAL1 In Stranger Skies, pg. 93). They are legally required to maintain their licenses and pay a 10% share of their plunders to the guild. Magical gems of truth are routinely used to verify the members’ integrity. Rules of conduct becoming Meríon the Great are also in effect. The guild house is located in Glorathon, a block north of Meríon Street in the Baron’s Court district (building #31, CAL1, pg. 97 and 105). 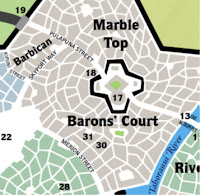 Advancement: Dragon slayers use standard warrior experience, combat, and saving throw charts from the chosen RPGs. Combat maneuvers and special abilities normally attributed to conventional warriors are also available to dragon slayers. Three experience tracks are provided: one for Calidar’s percentile rating, and two others corresponding to career advancements in other RPGs. Scale A is intended for fighters with d8 base Hit Dice. Scale B addresses other OSR games where warriors use d10s as their base Hit Dice. Scale B can also be used for the latest RPG designs, although encounter challenges should be adjusted significantly to match the combat abilities available to PCs in these games. Starting at 10th level and up, dragon slayers only earn +2 hit points on Scale A, +3 hit points on Scale B.

Prerequisites: Dragon slayers must possess Strength and Charisma ability scores of 16 or better (also see Spellcasting, next). The career is available to all races other than fellfolk or gnome (sorry, no dragon-slaying pixies). Benevolent philosophies do not permit harming dragons with similar ethics; less principled actors bear no such limitations.

Spellcasting: Later in their careers, dragon slayers acquire spells. The player chooses whether these spells are those of magic-users or clerics. Once the decision is made, it cannot be changed at a later time. To obtain clerical spells, a dragon slayer must be a pious or zealot follower of a specific deity (see CC1 Beyond the Skies, pg. 114 and 185). Dwarves can only cast clerical spells. Spellcasting requires a minimum score of 13 in Intelligence (or Wisdom, as appropriate).

Equipment: Dragon slayer armor is limited to studded leather, scale mail made from dragon hides, helm, and shield. There are no restrictions on weapons, although the primary weapon must be able to inflict at least 1d8 base damage.

Notoriety: Dragon slayers progress more slowly in their careers compared with conventional warriors. The percentage in the advancement table’s Notoriety column indicates the deduction that should apply to all experience the dragon slayer earns. However, in exchange for this deduction, dragon-slayers receive special abilities (listed in the next column) and additional Notoriety Points, over and above those usually awarded by the game master (see CAL1 In Stranger Skies, pg. 86).

After each adventure, when a game master awards experience, roll percentile dice against the score listed for NP Checks. If this Notoriety Check fails, the hero earns only 1 bonus NP. If the check succeeds, bonus NPs depend on how good the roll was. For each 10% rolled below the needed score (round up), add an extra +1 NP.
For example: A Notoriety Check yielded an 18 rolled against a score of 60%—therefore 60–18 = 42 (42/10 = 4.2, rounded up to +5). The total bonus NP thus earned is 6.
In short, a novice dragon slayer can earn 1-3 bonus NPs, spending 10% of earned experience in the process, while a dragon slayer of the highest experience can earn 1-7 bonus NPs much more easily, but at a 30% experience cost. The game master is entitled to deny such bonuses if an adventure was very short or trivial in order to avoid spawning an excessive number of bonus NPs.

Skills & Abilities: If skills are available in the chosen RPG, dragon slayers should have dragon lore, at least as pertains to Meryath in particular and Dread Lands in general. It should cover basic historical information and practical analysis (determining the age and type of a dragon from lost scales, foot prints, bite wounds on cadavers, etc.) These skills are based on Intelligence. Furthermore, dragon slayers earn a +2 bonus to Wisdom Checks directly related to situations with dragons and dragon-kin creatures.


Competences: Dragon slayers earn competences relating to specific types of dragons (white, red, silver, gold, and so forth, as appropriate to the chosen RPG). The player chooses the type of dragon. The first competence, labeled “Basic,” also includes dragon-kin monsters by default. A competence provides combat bonuses against the selected dragon type: Either a +2 attack bonus Or a +2 damage bonus at the player’s discretion, as well as the means to communicate in the selected dragon type’s language. The very first competence also grants a one-time +2 bonus to skill checks related to all chosen dragon types and dragon-kin.
As the dragon slayer’s career progresses, additional competences are earned. When a new Basic competence comes about, the player can pick an additional dragon type. All previously acquired competences also improve to their next highest categories (such as “Expert, Companion, Master,” and “Grand Master” respectively), each granting one extra +1 bonus (up to +4 maximum).
For example: A dragon slayer learning a second competence improves the earlier one from Basic to Expert (resulting in either a single +3 bonus or a +1/+2 combination of bonuses to attack and damage rolls vs. the dragon type chosen initially) and acquires an additional Basic competence against a different type of dragon.

Draconic Aegis: This ability initially grants the dragon slayer Either a +2 bonus to saving throws Or a +2 bonus to Armor Class with respect to encounters involving all creatures for which various competences have been earned. Each additional Aegis ability grants an extra +1 bonus (up to a maximum of +4).
For example: With Aegis II, the resulting bonuses could be either +3 to save vs. magical attacks from all chosen dragon types, or +3 to AC when fighting all chosen dragon types, or a +1/+2 combination of bonuses.

Move Silently: This ability enables dragon slayers to move silently as a thief of the same level.

Intuition I: The dragon slayer senses the presence of any dragon or dragon-kin creature within 150 feet radius indoors, or 300 yards radius outdoors. This ability does not indicate their numbers or their positions relative to the dragon slayer. The kind of creatures is revealed only if they are of a type previously chosen.
For example: A red dragon and two fire salamanders hide within detection range. A white dragon slayer would know one or more dragons and dragon-kin creatures of some kind dwell nearby. A red dragon hunter would know specifically that one or more red dragons lurk nearby, along with one or more dragon-kin minions.

Intuition II: The dragon slayer is able to tell how many, how far, and how “old” any of the detected creatures are. This ability also indicates which kind(s) of dragon-kin creatures are present, if any. If this ability is used within 100’ of a dragon, it may roll an Intelligence check (unless it is asleep). If successful, the dragon senses the slayer’s presence in the same manner.

Slayer's Path: This ability guides the slayer toward one of the creatures detected with Intuition II. With a successful silent move, the slayer always achieves surprise (provided the dragon or dragon-kin did not detect the intruder’s presence earlier by some other means), or at the very least gains initiative at the beginning of a combat encounter. Achieving surprise is only valid when the slayer acts alone (no other party members can accompany him/her but equally stealthy rogues or characters magically silenced).

Slayer's Deflection: This ability requires a large shield. With it, the dragon slayer only suffers half damage from the breath attacks of chosen dragons (thus quarter damage with a successful saving throw).

Death Strike: When performing a first strike with his/her primary weapon, the dragon slayer has a chance of killing the dragon outright. This type of attack is only possible if the slayer has taken the time to observe the dragon directly during a number of separate occasions equal to 1/4 its HD (rounded down). The "unmistakable feeling" that the slayer is ready to perform a death strike manifests itself when this precaution has been satisfied.
Odds of scoring a kill vary as follows: base chance = 35%, +5% per slayer Hit Die, and –5% per dragon (or dragon-kin) Hit Die. A roll of 96-00 always fails, regardless of the slayer’s total bonus; a roll of 01-05 always succeeds. Death strike can be used against dragon types for which competence wasn't acquired, but the base chance of success drops to zero. Whenever a dragon or dragon-kin dies from a death strike, double the XP share awarded to the slayer (not counting treasures).

Mesmerizing Gaze: When facing a dragon for which competence was acquired, the dragon slayer may fascinate his/her foe. Only one such attempt may ever be performed successfully against the same creature. The dragon is entitled a saving throw, with adjustments as follows: –1 penalty per slayer HD and +1 bonus per dragon HD. A roll of 20 always saves, a roll of 1 always fails. If mesmerized, the creature is unable to take any action until attacked or until its hoard or hatchlings are tampered with. In any situation including after the slayer retreats (if he/she opts to do so rather than attack), this effect never lasts more than 1d4+2 rounds in its entirety.

Breath Immunity: This ability reduces damage from breath attacks performed by dragons for which competence was acquired. No breath attack can ever inflict to the dragon slayer more than 1 point of damage per HD, regardless of saving throw outcomes.

Slayer's Despair: Whenever they are encountered, minions serving a dragon (or a dragon-kin) must succeed a Morale Check or flee at the sight of the dragon slayer. If more than one, roll the first few, starting with the most powerful minions. Some may succeed. If one fails, the remaining others all flee with it. This ability does not affect creatures immune to fear and other mind-affecting attacks.

Other Considerations: Given the age-old conflict between Meryath and Draconia, dragons and Draconic knights will target known slayers in priority over any other foe. Sporting dragon scale armor is a dead giveaway. Unit commanders or ship captains typically award prizes to knights who claim a dragon slayer’s head. Visceral hatred separate knights and slayers. Draconic operatives in Meryath may also resort to assassination attempts on foes celebrated for having performed death strikes on pure-blood dragons.