Out of curiosity, I generated alternate spell progression tables for D&D BECMI magic-users and clerics. There were two reasons for looking into this. The first is that 1st level characters start with only one spell (or none at all in the case of the cleric), which a lot of players stumble upon. The other reason is that by-the-book first level parties are incredibly weak, and especially in the case of the magic-user, they don't contribute all that much to a game session, other than role-playing or pitching ideas. It's all rather limiting. Spellcasters should be in the business of casting spells.

Entirely optional, this approach is a radical departure from standard game mechanics. No one is obligated to follow it--I'm mentioning this for the cohort of folks who "disapprove" of new ideas to an old game or any sort of attempt to change their habits. What I post here is only for those with an open mind.

There are plenty of house rules on boosting the numbers of spells 1st level adventurers can cast. Nothing wrong with this if that's the way you like it--it's your game. The alternate spell progressions sidestep borrowing game mechanics from other systems or fancy schemes tacked on existing rules. These tables also ensure that characters with lousy stats* still start with a good number of spells. 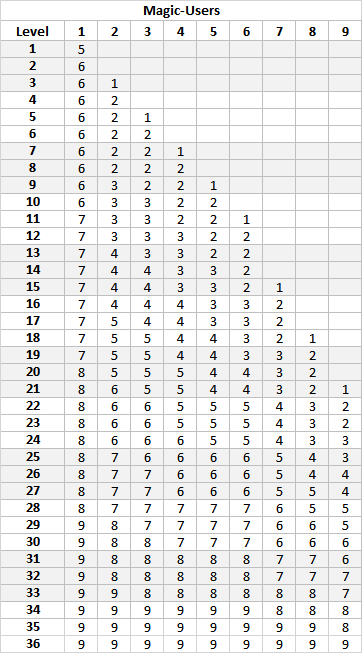 I had magic-users start out with 5 spells (1 Read Magic, 1 attack spell, 1 defense spell, 2 miscellaneous). The progression for first level spells ranges from there, gradually up to 9 across the board at 36 experience levels, as per official game mechanics. Spell levels above 1 are pretty much "by the book" in that they are earned at the correct experience levels.
(*) As regards "lousy stats:" I'm of the opinion that it is a lot more challenging to run PCs with low ability scores, and therefore the rewards ought to be greater than for those clad with 18s and 17s. I would also suggest reversing the experience bonus for high scores, rewarding low scores instead. With this in mind, the alternate spell progression tables make a lot more sense than giving extra spells for high intelligence or high wisdom attributes.

Clerics are a bit tougher to address since they're not straight-on spellcasters. Clerics have other advantages in D&D BECMI, such as armor and weapon choices, better combat abilities, better hit points, turning undead, etc. On the other hand, their spells are crucial to a party's survivability, as regards healing/reviving fallen heroes. D&D BECMI isn't designed to allow healing by means other than clerical spells or whatever magical potions might be purchased beforehand or gleaned in the course of an adventure. In practice, cleric spells often are the go-to solution for this, especially at low level. Yet, D&D BECMI has them starting with ZERO spell. Rather puzzling.

In their alternate spell progression, I did not want to give clerics as many spells as the magic-users. Zero wasn't an option, obviously. So I settled on just two at first level. I hummed and hawed about starting them with 3, but I erred on the conservative side here given all the cleric's benefits.

This approach changes the profile of regular games drastically since spellcasters have a lot more magic to throw around. On the other hand, earning spell levels 2+ is roughly the same as in official rules. These two tables do not alter spellcasting abilities all that much at higher levels either. At level 18+, the differences with official spell progressions are minimal, thankfully!

Let me know if you spot two identical rows in these charts. Thanks! For the elf's updated spell progression table, click here.  Have fun.

Art Credits: Hand of the Gods: Prescience by Eksafael


I've been asking around for a cool set of mechanics for random encounters in a city environment. I merged kibitzing from friends with my own ideas and came up with the following material (to be included in Calidar's upcoming CAL3 Gazetteer this year). Your thoughts are welcome. The actual descriptions of the encounters will be included in the book. This article only focuses on mechanics driving the frequency of encounters and their distribution across a city.
---ooOoo---

Odds of stumbling on someone or something vary with the time of the day and the city district. Encounter descriptions are as simple as possible, giving a general idea and leaving details for referees to develop according to the needs of their games.

When to Roll: Primary mechanics involve PCs moving along streets. Basic odds of random encounters are 10%, plus 10% each time an intersection is reached. Roll any time a new intersection is reached while adjusted odds exceed 50%. If a random encounter takes place, reset odds to 10%. This approach implies that encounters are more frequent in neighborhoods with many alleys and small building blocks such as Old Meru, than in districts featuring large blocks like Soul Tree. If a party lingers in one spot, wastes time in fruitless dithering, or attracts attention to themselves, roll on the random encounters table directly at a time that seems the most judicious.

Time of Day: The time of an encounter influences who or what comes up. Mythuín’s busiest time runs between 10:00 am and 2:00 pm—roll on the following random encounters table without adjustments during that time. For every hour segment before 10:00 am or after 2:00 pm, adjust the roll +3. For example: An encounter taking place at midnight should incur a +30 modifier on the random encounters table.

Encounters: Encounters depend on which district they take place. [[Note from the Author: Details about the districts have been deleted from the blog entry. Essentially, the four categories can be summarized as upper-class, upper-middle class, lower-middle class, and lower class.]]

Encounters with monsters are listed in italics; all the others involve NPCs. Except for street patrols, use the next eligible entry to avoid duplicate results. Street patrols are listed multiple times for this reason. Encounter descriptions follow in alphabetical order.

Etc. Let me know if you stumble on any clunkers.

Email ThisBlogThis!Share to TwitterShare to FacebookShare to Pinterest
Labels: Alfdaín, Calidar, Cities, Dungeons and Dragons, Game Mechanics
Newer Posts Older Posts Home
Subscribe to: Posts (Atom)
Please use this button for private purchases, late Kickstarter pledges, or just beer money! Contact me on Facebook or Mewe if you have any questions -- Thank you!
Knights, dragon slayers, & bards unite... or not.