The next character class on my update list is the halfling. The experimental version I'd posted back in February was a bit controversial. Most readers liked the burglar skills. On the other hand, opinions were fairly divided about druidic spellcasting. OK, that was over the top. The good news: there’s plenty of room for options! 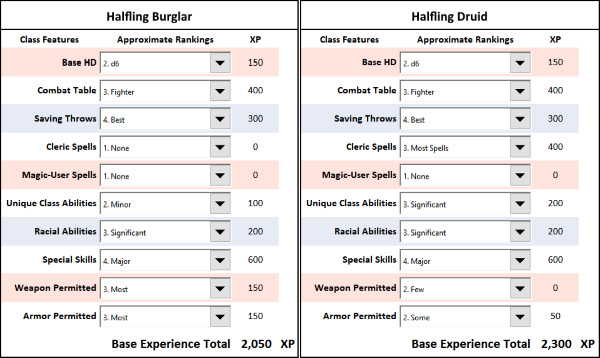 1. The experimental version without spellcasting ends up with 2,200 base xp. I added +200 xp as a discretionary modifier to account for the halfling using the fighter combat table and possessing burglar skills (no backstab though, remember?) The burglar skills are those from the original article. Special and racial skills as well as unique class abilities are largely the ones from the official version (I use the RC description). It’s a fairly tough character, given it also has great saves. I set the flat rate above level 9 to +120,000 xp per level. Enjoy!

2. Now, for the spellcaster version, I had opted for a druid rather than a cleric. Feel free to swap druid abilities for those of the cleric if you prefer (there will be a small difference in the base xp). A number of things change from the halfling burglar (don’t be like me and misread this as “halfling burger.”) Aside from the spellcasting ability, unique class abilities drops to minor, weapons permitted drops to few, and armor permitted drops to some. This results in exactly the same 2,200 base xp as the halfling burglar. How convenient. The druid class, as described in the RC, shows no actual special or class-related ability. 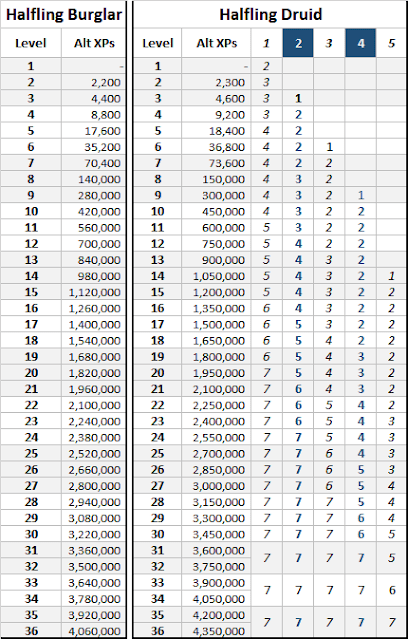 If you prefer a druid with special abilities, use those from AD&D as inspiration. I would then move unique class abilities to significant. Abilities at first level include passing through overgrown areas without penalty or without leaving a trail, and identifying pure water as well as plant and animal types. In the AD&D sphere, significant abilities come into play at xp level 7. At this level an AD&D druid can cast one level 4 spell, which corresponds to a level 9 halfling; therefore, these special abilities become available at that level instead. This includes shapechanging and immunity from faerie charms. As a result, this halfling druid with special abilities has 2,300 base xp. I would also up the flat rate above level 9 to +150,000 xp per level because of the way the table adds up.

There you go! Plenty of options to play with.