The next item on my list is the aforementioned character class. The thief is mostly an open-and-shut case as regards its “revised” xp progression. This being said, I'll take instead the opportunity to present a fun option as a side dish. Click here for the previous article about the updated elf if you need to go back.
Art Credit:  "Thief"  by jpeabody on Deviantart

Background: This is part of an ongoing series of articles about level progression mechanics. It all started with experimental updates to the magic-user and cleric spellcasting tables posted last January. A number of updated or new character classes followed. Feedback on those was useful—thank you! Suggestions will be incorporated in later updates wherever practical. This led me to create a user-friendly Excel spreadsheet to help put numbers together quickly and easily. This spreadsheet is particularly useful in making sense of the math used when creating homebrew character classes, and in ensuring some degree of consistency across the board. 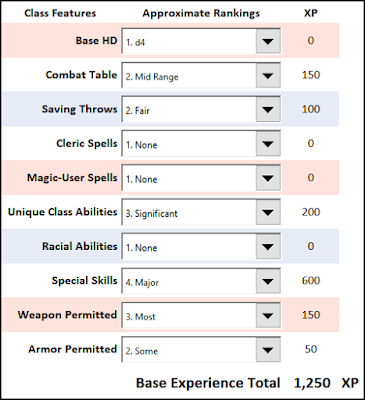 It turns out the base xp generated from the spreadsheet essentially match the official ones. The level progression table is therefore the same. The biggest change came from thieving skills getting boosted at low levels in the earlier article, and from some thinking about backstabbing. Everyone seemed satisfied with these alterations. No change here. I’ll just post the list of choices from the spreadsheet for reference.

What About a Cleric-Thief? Just for giggles, I ran numbers for a spellcasting thief. What's different: I gave the base thief class some clerical spells, cleric saving throws, and the Turning ability. Spells are limited to level 5, with a much slower progression compared with the true cleric’s spellcasting abilities: the thief-cleric gets its first level 5 spell at xp level 14, versus xp level 10 for the official cleric. Spellcasting at low levels is otherwise the same. The other thief class features remain the same (use the updated thieving skills I presented in the previous article).

Base xp grow from 1,200 to 1,800. I manually increased the base xp with a +100 xp discretionary modifier for the cleric’s Turning Undead since I didn’t think it warranted boosting the thief’s unique class abilities from Significant to Major. I also increased the number of xp required above level 9 from the thief’s 120,000/level to 130,000/level. It seemed only fair. The thief-cleric, therefore, becomes a Custom Class.

Here is the string of numbers I entered into the spreadsheet.

The updated advancement table for the thief-cleric is as follows: