D&D: Death in the Night

Here’s a new creature that, as far as I know, has not yet been described as an RPG monster (correct me if I’m wrong). Definitely far-eastern in style, this one concerns both Calidar and the mysterious world of Lao-Kwei. Your PCs may come to fear and hate them. Game stats are written for D&D BECMI.

Also known as dark ophidians, the Bào shé (豹蛇) possess the lower bodies of large snakes, human-like torsos and arms covered with short fur, and the heads of black panthers. A powerful sorcerer in faraway Lao-Kwei had bred these creatures to assassinate greedy imperial officials. For all their troubles, the empress cast a forever curse upon their kind that they may never again enjoy the light of day. After taking revenge upon their creator for their somber fates, they fled Lao-Kwei to escape imperial bounties posted there for their eradication.
Their flight took them through a malfunctioning Kahuulkin portal. Their skyship materialized close to the ground on Calidar whereupon they crashed. Survivors found a cavern where they could hide during the day, and they eventually reproduced. The Bào shé are content to be left to their devices, but their nature compels them to hunt and slay those who defy them. They dwell in the Uplands of Aghea’s tropical savanna, 2,500 miles southeast of the Great Caldera. 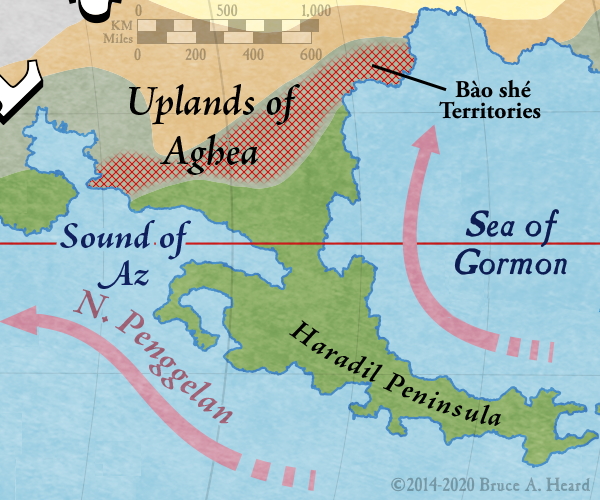 Over time, they established several independent clans jealously guarding their territories against other sapient races, usually marauding fellfolk, occasional humanoid remnants of a past Ghülean raid, or wayward Calderans. Exceedingly rare are foreigners trading with the Bào shé, let alone enjoying their nefarious services. They’ve come to dislike Felisean visitors the least. The existence of these ancient creatures has so far escaped the notice of present-day Lao-Kweian rulers whom the dark ophidians hate above all.
Clan strongholds are indistinguishable from rocky bluffs in the veldt. Their true natures and their gates only appear under moonlight. Save for their sentinels, the Bào shé sleep during the day in dwellings carved out of the region’s natural sandstone. They come out at night to hunt and to patrol their vast territories stretching from the shores on the Sound of Az to the Sea of Gormon.

The erstwhile enchantment bestowed upon the ancestral ones still runs deep in today’s Bào shé. It enables them to move through shadows nearly at will. This stealthy movement extends from one shadowy area to another within direct line of sight up to 150’. This ability can be used repeatedly, once per combat round, as long as the Bào shé succeeds a Con Check; if one fails, the ability can no longer be used until after proper rest is obtained. Shadowy areas are defined as those spots in which a thief may attempt to hide. Each move is considered a full action, although a hide in shadows roll is allowed upon arrival.
Dark ophidians also know the ancient ritual of spectral blades. A Bào shé can only ever own one such weapon at any single time. With a successful attack, the blade disintegrates and its wielder steals the victim’s soul (no save). The stricken foe’s body is still alive, but in a catatonic state until it starves or falls prey to some other peril. The stolen soul remains inside its captor’s body who can then can access its memories (but not its skills). If either a Bào shé or its victims are killed, stolen souls fade into the netherworld (or return to their bodies, if still alive). A catatonic victim can be kept alive indefinitely with a daily healing spell.
The ancient enchantment is such that if a captor holds nine souls at any single time, it vanishes from Calidar and reappears inside the abandoned abode of the Bào shé’s original creator on Lao-Kwei. Others have already made it to this ancestral birthplace. They gather their forces there to strike down the now-deceased monarch’s present dynasty and its heirs following a legendary prediction that "whensoever the ancient empress's blood be extinct, shall the forever curse be forfeit." It is the reason why dark ophidians do not slay victims of spectral blades; rather than abandoning survivors to the outrages of wildlife, the Bào shé occasionally leave their victims’ bodies near a village so they may be kept alive.
Spectral blades are +2 magical weapons. Dark ophidians are known to craft other enchanted items through ancient rituals, such as various potions, magical rings, smoke bombs, paralyzing poisons, and powerful narcotics. They use equipment normally allowed for thieves such as swords, daggers, throwing stars, short bows, blowguns, leather armor, (etc.) as well as certain specialty items like war claws, flying claws, steel fans, nunchakus, chain whips, dragon beard hooks, and rope darts.
As the result of the empress’s forever curse, direct sunlight (whether natural or magical) prevents the Bào shé’s shadow movement, inflicts 1d4 hp of damage per hour of exposure, and instantly disintegrates unsheathed spectral blades (no save). Dark ophidians suffering exposure also incur a –2 penalty to their hit rolls, to their saving throws, and to their initiative rolls.


Source: The map was cropped and altered from the revised climate chart by Thorfinn Tait, available as a poster map on DTRPG ©2019 Bruce A. Heard. The Lao-Kwei setting was introduced in Calidar’s CAL1 In Stranger Skies, page 54. The Bào shé as fantasy creatures and their realm is original content ©2020 Bruce A. Heard.
at 6:39 AM