D&D: Eyes in the Mist

Here is someone not to be monkeyed with, offered here with D&D BECMI game stats. The inspiration is directly grounded in the Mystic character class. Feel free to transplant/ape into a game world other than Calidar, using correct abilities for a fighting monk, as appropriate to your chosen game mechanics. Definitely a chimp off the old block.


Hanāi: AC 3 (unarmored), HD 3****, 15 hp, MV 170’ (60’)/150’ (50’) in trees, AT 1, D 1d6+1 barehanded or by weapon, Save My4, Str 8+, Dex 13+, Con 8+, Int 8+, Wis 13+, Cha –1 penalty vs. other races, ML 9, AL Varies, Size: M (5½-6 ft. tall,) XP 95.
Abilities: As a level 4 mystic (see RC pp. 29-31), including improved AC, MV, AT, Dmg (can hit foe requiring +1 magic), fighter combat options, acrobatics, thief skills, and special class powers (awareness and heal self). Racial abilities include shape-changing and clairvoyance. Shape-Changing: x1 daily; human-like only; cannot imitate a specific individual’s facial traits but can easily pass off as someone of another race with approximately the same size (human, elf, half-elf, half-orc if available in the chosen game world). The Hanāi can return to its native form at any time, forcibly upon death or if subject to a dispel magic. Clairvoyance: x1 daily; similar to a clairvoyance spell.
The Hanāi incurs the same restrictions as standard mystics (as regards armor and protective magical devices). It uses its feet (with opposable thumbs) and its prehensile tail to help move quickly through the forest canopy. 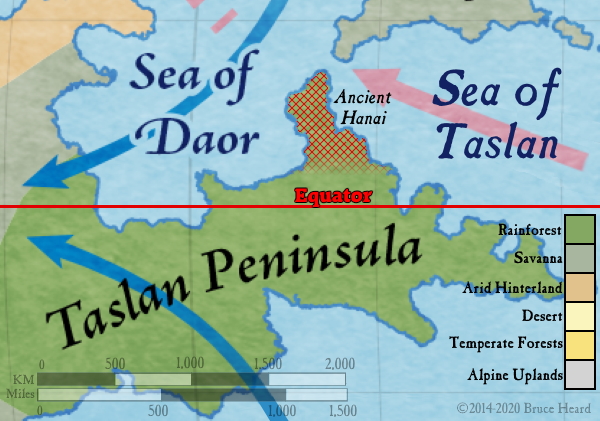 Many centuries ago, the Hanāi possessed a large realm that had emerged during a period of weakness in the Dread Lands. Alas, a Ghülean epidemic nearly wiped them out. Legends tell of some who fled as far as the great mountains of southern Omfall, growing thick white fur to survive. Others wandered deep below ground or to the Kalataazi Desert and were never heard of again. Over time, scattered groups returned to the ruins of their abandoned realm in the Taslan Peninsula, careful not to anger the spirits of nature which had reasserted their dominion upon this land. Elders learned the rituals to appease spirits of nature in order to gather what people needed to live.
Their villages today consist of bamboo-built abodes dangling from very large tree branches, interconnected with rope bridges. Invasive vegetation has overtaken ancient stone-built stupas and prangs—tall, spire-shaped, heavily adorned shrines. Those still standing have been cleared of debris and wild growth on the inside and below ground save for the largest roots. The forest canopy hides much of those ruins from above. 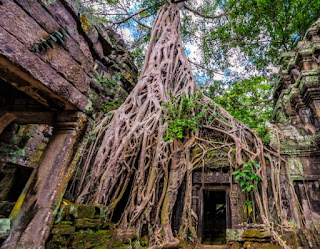 Fragments of paved roads, once-royal stairways, bridges, and statues blend in with the rain forest. It is said that the Hanāi possess a bond with primates. Elders and adventurers of their kind know how to communicate with apes, monkeys, and other simian creatures who often serve as spies and watch over Hanāi tombs.


Source: The map was cropped and altered from the revised climate chart by Thorfinn Tait, available as a poster map on DTRPG. Ghüle is an alien world; source material is located in CC1 "Beyond the Skies," pp. 244-245. As a fantasy creature and its realm, the Hanāi is original content developed for the author's blog ©2020 Bruce A. Heard.