D&D: The Horror Below

The Teekal were native fellfolk who turned into jellyfish-like wraiths. Eons earlier, these stone-age nomads dwelled along Grand Valley of Khargandal’s southern shores. They dabbled with dark magic Ghülean raiders left behind for them to unearth. While the Teekal learned much in the necromantic arts, their newfound knowledge slowly transformed them into their present form: translucent and devoid of bones, fundamentally evil, undead, and craving the vitality of the living. Their arid homeland and the scorching light of the tropics drove them to seek the cool dimness of the deep, claiming the Teekal Seaway as their new realm. Save for parietal art hinting at the fellfolk’s sinister fate, little remains of their past existence on land. They are now irretrievably beholden to alien gods of Ghüle whose emissary they await.

Those intruding upon the seaway’s depths will probably encounter the Teekal’s marauders first. These are soulless constructs indistinguishable from large jellyfish. They occasionally foray into nearby seas, in search of prey near the shores of the Taslan Peninsula and the Island of Mareas. They usually attack small boats at night. Their purpose is to fetch what their makers covet the most: the souls and memories of the living. With their long tentacles, they ensnare their quarry and paralyze them. While kept alive and fully conscious by means only necromancers can fathom, their heads are cut off and their bodies discarded. All flesh other than eyes and brain matter is digested, after which the skulls and their contents are sucked into the marauders’ translucent innards and taken back to their makers.
The Teekal upper bodies appear humanoid, while their lower halves looks more like bell-shaped cnidarians, with whorls of writhing tentacles where legs ought to be. With one such tentacle, one may pierce through a captured head and burrow into its brain in order to examine its owner’s past life. The process may last many days of sheer pain and horror for the victim, as the inquisitor sifts through items of interest and dwells with unholy relish upon emotional moments defining one’s entire life. All memories are meticulously observed, organized, and mentally marked for future use. 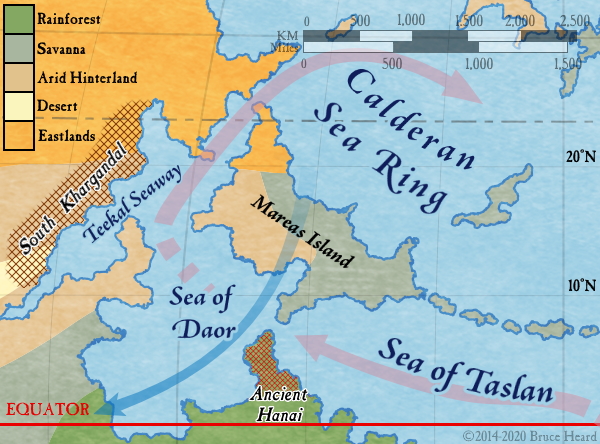 Should captives offer little of interest, their flesh is sucked out and their souls devoured. Marauders regurgitate the bones and return to their previous duties. The others remain in a great hall made from hollowed out skulls, in alcoves where marauders and their captives are kept alive. By then, most victims have gone utterly mad from terror and despair, but such isn’t the Teekal’s concern. Their intent is to preserve all the information they gathered and turn it over to the Ghülean emissary, should it ever show up.

Marauder: Body AC 9/tentacles AC 6, HD 4**, 15 hp +1/tentacle, MV 30 (10’), AT 1d4+1 tentacles, D 1d4 each, Save F8, Int 0, ML 12, AL Chaotic, Size: M, XP 175.
Abilities: Invisible from more than 30’ unless holding a skull. Paralysis as a ghoul. It fights with up to 5 of its fifteen 30’ long tentacles each round. Each hit requires a saving throw. The marauder wraps 1d4+4 tentacles around a paralyzed victim and floats away, fending off any pursuers with 1d4+1 of its remaining tentacles. Unless rescue takes place, the victim’s head is sucked in and extraneous flesh and hair melted off within the next 3 combat rounds +1 per experience level or HD of the victim. Death occurs if the disembodied head is taken from the marauder or if the creature is slain.
Each tentacle requires at least 1 hp damage to cut off. They are immune to blunt and piercing/stabbing weapons, except for their magical bonuses, if any. The marauder’s bell-shaped body incurs half damage from slashing and blunt weapons except for their magical bonuses. It suffers normal damage from piercing/stabbing* weapons and magical attacks (* includes most swords if their owners clearly announce they are stabbing only). The creature uses tentacles with which it performs attacks to keep these foes away from its body. It receives a +2 bonus to hit foes ignoring tentacle attacks in order to reach its body. Tentacles can strike foes up to 30’ away. Inflicting 15 hp of damage to the body kills the creature. Marauders suffer an immediate Morale Check with a –2 penalty during each round of exposure to sunlight.

Teekal*: Body AC 7/tentacles AC 4, HD 7*****, 32 hp +6/tentacle, MV 60 (20’), AT 4 tentacles or 1 spear or 1 spell, D tentacles and spear 1d6 each or by spell, Save F10, Int 10+2d4, ML 7, AL Chaotic, Size: S (fellfolk body size), XP 2,450.
Abilities: Spellcasting as level 6 clerics—spell levels I-II x2 each, level III x1. Same general abilities as the marauder (they do not carry their foes' skulls). Teekals attack with all four of their 20’ long main tentacles; they require 6 hp damage to sever although they regenerate within a day. Their bodies can withstand up to 32 hp.
They possess two arms as part of their torsos, although their hands and fingers are worm like. Some may wield a long spear whose head was coated with poison. The toxin is discharged with the first successful attack, liquefying the foe’s internal organs for 6d6 damage (save for half).
Teekal speak a more sophisticated version of their old language, which other creatures in the region may understand (such as the Hanāi published earlier). They developed a written form, and can produce magical items.

An Unexpected Guest: A sea god of Caldwen, Samaz is in fact a renegade who fled his alien masters in the Ghülean dimension. Powerful in his own right, he rose as a deity, hiding his true origins and watching for portents of his former overlords coming into Calidar’s universe. He’s found the Teekal and knows their purpose. Working surreptitiously from the shadows, he endeavors to manipulate their race, occasionally posing as a Ghülean emissary when the Teekal commune for their spells, hopefully to divert them from their evil quest. Some may already be under his sway. Ghülean gods have not detected his influence so far. Nonetheless, Samaz posted aquatic servants of his at narrow straits outside the Teekal Seeway and the Sea of Daor. Their objective is to slay marauders attempting to cross through, and launch an invasion should a Ghülean emissary show up. These forces often rely on beguiled sharks, swordfish, sea turtles, which are natural jellyfish predators.

Source: The map was cropped and altered from the revised climate chart by Thorfinn Tait, available as a poster map on DTRPG ©2019 Bruce A. Heard. Ghüle was introduced in Calidar’s CAL1 In Stranger Skies, page 55. Ghüle and Samaz were developed in CC1 Beyond the Skies, pages 102 and 245. The marauder and the Teekal as fantasy creatures constitute original content ©2020 Bruce A. Heard.

Email ThisBlogThis!Share to TwitterShare to FacebookShare to Pinterest
Labels: Beyond the Skies, Caldwen, Calidar, cartography, Climate, Dungeons and Dragons, In Stranger Skies, Monsters, On Wings of Darkness