As monsters raise their not-so-comely heads from the murk of faraway wilderness, the opportunity to peer at different regions of Calidar presents itself. Here’s an example. Let me know if you want more of this. Monster stats are written for D&D BECMI. If you’re not into Calidar, feel free to cannibalize. A nasty critter is a nasty critter, no matter the chosen game world.

A demigod known as Dramongul once attempted to establish a swamp realm on Calidar, along the Sea of Gormon's eastern coast. Part lizardman and crocodile, Dramongul’s people are well adapted to their natural environment. Successful at first, they triggered their civilization’s doom after disturbing the Dread Lands and attempting to fight back. Challenged by colossal forces of nature, Dramongul fled the prime plane. With their dark temples ruined and their kind nearly wiped out, survivors found refuge on two swampy islands near the coast, each about 140 miles across. Partially submerged, their fortified dwellings hide under the canopy of mosquito-infested, mossy jungle. They form two rival kingdoms blaming each other for the demise of their once-powerful theocracy. Each side also holds a piece of an artifact that could weaken the Dread Lands enough to enable reestablishing the old theocracy, if ever they were reassembled. With neither side wishing to relinquish its sacred relic, a state of war prevails among the two neighboring islands. 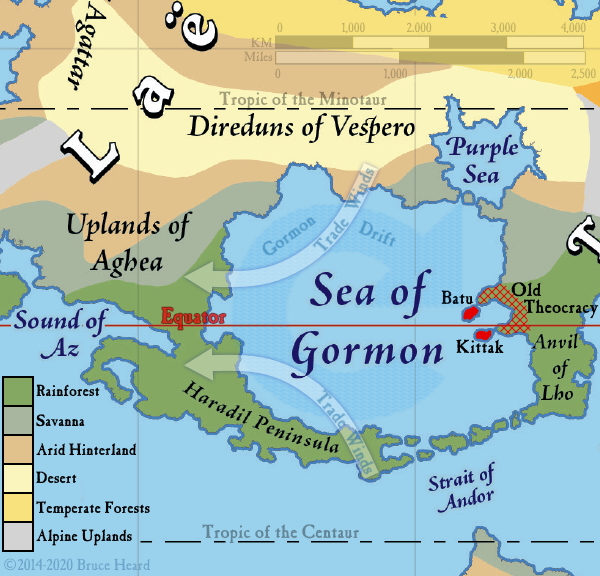 Their dwellings are typically unlit and consist of partially flooded chambers and underwater corridors. Entrances are usually located beneath the surface. Crocotaurs can stay submerged up to 30mn if active, or 2 hours if hiding or lying in ambush. Their writing consists of claw-engraved bones, calabashes, and soft stones. Such engravings can be their version of clerical scrolls. Crocotaurs know how to brew potions and other potent beverages. They dislike fire and fear lightning bolts (–2 penalty to their Morale checks if one is cast at them).
If its damage is average or better, a bite is strong enough to lock on to its prey. To release its hold, the crocotaur must be killed or made to fail a Morale check and flee. A locked bite automatically inflicts 1d6 damage per turn; it enables the crocotaur to drag a man-size victim underwater (moving 20’ per round on the ground or at full speed underwater), and bestows a +2 bonus to hit with its four front claws. The tail attack can only reach foes behind or beside the creature; if incurring average or greater damage, its victim must succeed a saving throw or be stunned (effect: move at 1/3 MV, can’t attack or cast spells, –2 penalty to both AC and saves). Unencumbered crocotaurs can run at 90’/round when on solid ground.
Some favor combat equipment when fighting on the ground, such as woven-bamboo tusked shields, bone helmets adorned with monstrous horns, javelins (2-3 strapped on back), or melee weapons made of ironwood (a cleaver or a fang-studded mace). Shield-bearing crocotaur’s are AC 2. Their tusked shields can inflict 1d6+2 damage (on shield-bearing side only); melee weapons inflict 1d8+2 damage; javelins are usually thrown (range: 30/60/90) and inflict 1d6+2 damage. All physical attacks are held back and weapons set aside when casting spells. Crocotaurs aren’t known to use bows and other non-thrown missile weapons, but may nonetheless produce magical equipment of a clerical nature.

Source Material: The geographic chart was cropped and altered from the climate map in Calidar’s CAL1 “In Stranger Skies,” pg. 71. The demigod came from the list of monstrous deities in CC1 “Beyond the Skies,” pg. 241. The crocotaur itself is original content developed for the author’s blog.