Greenspur:  a realm of lawmen, accountants, and bureaucrats.

Its most notorious trait is its ancient tradition of bureaucracy.  As pointed out in better-known travelers' digests, Greenspur is the most vellumwork-happy realm of Alphatia.  No sentient creature unable to defy the laws of this land may enter or freely go about without proper documentation.  And proper documentation comes with many pages, even more fees, and to match the latter, stamps, seals, and fancy ribbons.  The ever-expanding bureaucracy feeds upon itself for its own sake, for if it didn't, the entire system would collapse.  Naturally, one must produce the precious records upon request.  Leaving or entering any of the realm's jurisdictions require--yes my friend, you guessed it--more fees and more documentation.

Next come the accountants.  There could not be a credible bureaucracy without layers of accountants keeping track of the realm's funds.  Accountants are highly trained, vigilant beyond belief, and indoctrinated not to deviate from established (read: legal and accepted) practices.  One benefit is that government fraud is quasi-nonexistent, while commercial fraud remains at one of the lowest levels in the empire.  With good reason, monarchies and businesses across Alphatia rely on the hired services of accountants and auditors from Greenspur's universities.  Private accountants maintain affiliations to one guild or another.

Finally, the last and perhaps most important aspect of Greenspur resides in its legislative structure.  In other words, this realm is a paradise for lawyers, judges, and all sorts of law professionals gravitating around courts of justice.  It also is a festering nest of litigious predators who use the voluminous sets of laws and ancient jurisprudence to fleece those uninformed or unwise enough to transgress established rules.  In fact, the entire nobility system revolves around office titles inextricably connected with the legal system and the realm's administration, called "Exchequer."  It drives the internal politics of the country. 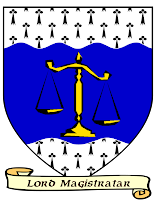 The Magistratar: At the top of the pyramid presides King Sildreth II, who also holds the oddly spelled title of Magistratar and its corresponding jurisdiction as his personal dominion.  This title is important as it directly concerns the approval process of new laws and the removal of older ones.  The Magistratar resolves any cases that previous courts (and there are many successive circuits to handle appeals) failed to close.  King Sildreth II naturally is the realm's top administrator and one of the three authorities that determine who should be awarded enchanted regalia (see below.)  The king nominates recipients for the awards, including himself, at the end of each calendar year.  Enchanted regalia is awarded if the other two jurisdictions concur (see Defendar and Requisitar.)  The Magistratar oversees all Exchequer departments (called Squares) not directly under another jurisdiction or linked to enchanted regalia.

Another nine key office titles exist in Greenspur.  Their nobility rankings vary on how good title-holders are at fulfilling their responsibilities.  As such, it is a meritocracy laden with enchanted regalia enhancing one's abilities and administrative influence.  Each earned medal, talisman, ring, necklace, scepter, and other honorific doodad gives a measure of control over a specific Square of the Exchequer.  There are black and white Squares.  Jurisdictions can only controls Squares of the same color.  The first attributed Square determines whether a jurisdiction is "White" or "Black."

The nobility system is somewhat reminiscent of Arogansa's since titles are hereditary.  Law-breaking, felony, gross mismanagement, or failure to support the Exchequer's goals and well-being may result in the loss of a title, seizure of property, fines, public torture, imprisonment and/or banishment, or the death penalty.  Vast numbers of petty nobles thrive in Greenspur, recognizable by the "Esq." suffixes following their names.  Naturally, inheritance or the transfer of titles are highly regulated and require beneficiaries to hold proper diplomas, birth certificates, and proof of citizenship.  Occasionally, enchanted regalia may be awarded to an Esquire of the Realm as a reward for services above and beyond the call of duty.  Ownership of enchanted regalia is not hereditary, and it must be returned to the House of Requisitar at the time of succession. 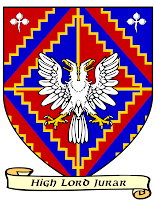 The Jurar: since ancient times, the Jurar runs the legislative body that verifies rules are applied when selecting members of a jury.  The Jurar also acts as the King's Adviser, presides over the Ministry of Education, stands as the Arbiter of the Guilds, and is the de-facto regent for the monarchy.  In addition, the Jurar also runs the Office of Indoctrinations which regulates and controls the certification process for accountants, magistrates, and administrators. 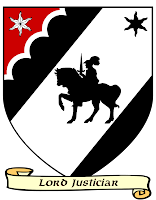 The Justiciar: is the realm's top bounty-hunter and head of "internal affairs."  The House of Justiciar is responsible for hunting down and bringing to justice those summoned who failed to appear.  Justiciars also investigate suspicions, allegations of wrongdoing, and other irregularities amid the Exchequer regardless of actual jurisdictions.  The Head Justiciar has authority to requisition certain units of the military or individuals in the service of the Inquisitrix, hire native or foreign "heroes" (including non-wizards,) or personally handle very important cases. 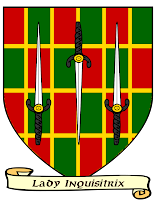 The Inquisitrix: traditionally, this is the top investigating branch of the Exchequer.  The Inquisitrix is the king's master spy and runs the realm's intelligence network.  After the Jurar, it is the next most important adviser to the king, especially in matters of foreign diplomacy and relations with the Imperial House in Vertiloch.  The Sans-Parole Penitentiary on Malfera Island is controlled by the Inquisitrix, as well as all other gaols in the realm.  Although there is no Guild of Thieves in Greenspur, the spy network comes close. 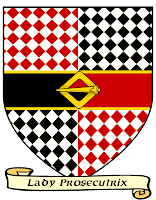 The Prosecutrix: originally, the Prosecutrix represented the realm when making accusations.  The Prosecutrix's Jurisdiction runs parts of the army and navy outside the realm's borders, during a war or when summoned by imperial authorities.  This command is of an offensive nature (as opposed to the House of Defendar in charge of homeland defense.)  As a counterbalance to the Defendar's authority, Prosecutrix traditionally controls the Royal Guard in Eagret and all offshore operations against piracy and smuggling. 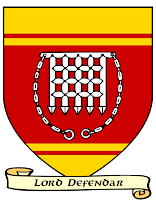 The Defendar: runs the army and the navy at home, and stands as "Advocate of the Exchequer."  The House of Defendar is responsible for general law-enforcement in the realm.  If a military unit's commander isn't a member of the House of Defendar, the second-in-command must be, as a sort of political commissar to ensure the Exchequer's orthodoxy is respected and promoted.  The Defendar is one of the three authorities that determine who should be awarded enchanted regalia. 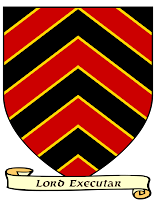 The Executar: since Greenspur's early days, the Executar has wielded extraordinary abilities to carry out verdicts.  These magical powers are generated and guaranteed by the Exchequer, so long as they are invoked to effect a verdict.  The House of Executar relies upon a number of common hangmen, native or foreign heroes, and unusual creatures bound to do their duties, including outer-planar assassins.  Although there isn't a Guild of Assassins in Greenspur, the House of Executar comes close. 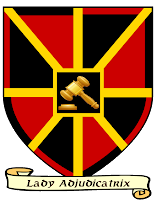 The Adjudicatrix: traditionally approves or revokes judges, especially top magistrates.  The House of Adjudicatrix also functions as the Ministry of the Land, which includes the administration of roads, ports, and mines, and the enacting of policy affecting farming, fishing, hunting, or commerce in general.  The Adjudicatrix is the Third Adviser to the King in the matter of the realm's economy. 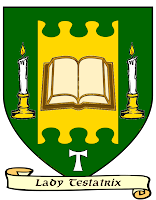 The Testatrix: since ancient times, the Testatrix handles matters of death, inheritance, succession, and the transfer of titles.  Whenever common law or litigation fails to solve a case, the Testatrix may determine inheritance for any of the Ten Jurisdictions, including royal succession.  So far, responsibilities have been carried out successfully since there never have been wars of succession in Greenspur, or civil wars due to a monarch passing away.  The House of Testatrix also regulates all matters pertaining to religious philosophy, including those involving faiths of foreign origins.  There is no official faith in Greenspur. 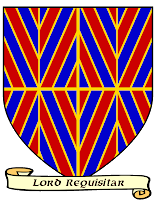 The Requisitar: The House of Requisitar is responsible for producing, preserving, and securing all enchanted regalia not presently attributed to other individuals.  The Requisitar is one of the three authorities that determine who should be awarded any such regalia (see the House of Magistratar earlier.)  This jurisdiction also governs tax collection and the general finances of the realm and may requisition parts of the military to accomplish its mission.


Click HERE to view or download the map.  Special thanks to Janet Deaver-Pack for her editorial assistance.