The next morning Janet and I charged out of the room, down to the mezzanine level, and across the gallery arching across Maryland Street to the convention center. Past the registration lines, a very busy hallway led to the main area before the dealers' room. There still was some time before the grand opening, and the crowd was growing fast. Janet headed upstairs to her seminar. I made a bee line for the gaming area with a pervading sense of awe at the sheer size of the place.

A few snaps later, I returned to the main hall. Cutting through the crowd, I made my way to the escalator and stopped upstairs for a better view. The place was packed, from wall to wall to wall. Since the time had come for the Gates of Wonder to be flung open, I made the mistake of stepping onto the downward-escalator. I soon found myself hopelessly sandwiched between the packed crowd below and the folks still coming down the escalator. It looked pretty grim when people ahead of us fell while the living clump of compressed bodies spilled forth. Visions of trampled gamers and a certain writer crossed my mind. Fortunately, we were able to inch along and condense the rest of the crowd even more. And the doors opened.

Brandishing my camera, like a warrior his mighty battleaxe, I was swept inside with the gleeful torrent of chaos. A gigantic parallel world of glittering booths, huge banners, and garish trappings revealed itself. Under a black ceiling studded with brilliant stars, the latest game releases, heaps of steampunk costumes, helmets, hats, feathers, see-through garb, fake swords, books, mounds of dice, miniature hordes of all sorts, jewelry, t-shirts, leather goods, towers of boxed sets, seas of collectible cards, giant props, and fake castles welcomed all to this place of blissful perdition. One could spend much of the convention just playing every game demonstration available there. It was endless and horridly wonderful all at once.

In the packed alleyways, throngs of experienced gamers hurried along on a quest to be the first to lay their hands on a prized something. Staffers at the booths were hard at work, unveiling the myriad secrets of their games, their mechanics, their components, their toy value, their brands, and their genres to mom, pop, and the kids. Dice clattered fiercely in the demo areas. Eyes grew wide with anticipation. Mine too.


Costumed participants inched along, from cheeky knights bearing swords twice their own sizes to giggling jiggly warrior princesses in all-too-revealing, audaciously over-hanging, attire. It was all par for the course. It wouldn't be Gen Con without them.

Promising myself to return soon, I fought against the human current and found my way back to the gaming area. I checked my event ticket. Exhibitors' Hall C, Blue Area, table number whatever. . . I had no idea where that was. Perhaps the three blokes sitting at the HQ-thingie over there would know. “Yes, Sir. Check the map posted right here,” one said, pointing at the big panel next to the table. Well, that made a whole lot of sense. Soon afterward, I handed my ticket to the guy at the correct spot, lost somewhere amid an immense expanse of hundreds of tables. 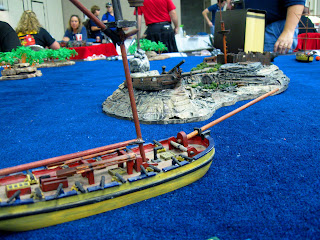 I returned my attention to my event. A blue cloth represented the sea. Rocky islands of painted foam surmounted with tufts of plastic palm trees stood for treasure islands. Over there, a fortification. It was the Dutch port. Closer to me, at the edge of the table, lay the English docks with a mess of miniature ships. Near the other end of the table was an unmistakable pirates' lair with a wooden palisade flying the skull and crossbones.


It didn't matter that it was plastic and paint. My imagination easily abstracted all that and transported me to that time and place. I was there and eager to set sail, sea spray in my face and the wind in my hair. In short, we could search islands for treasures and score points, or duke it out in teams for more points. We were all at war, the Brits, the Dutch, and of course the pirates. The latter enjoyed the biggest crews, expecting to board and capture any of us. The Dutch had larger ships with more guns. The Brits relied upon crack gunners and a handful of royal marines. For the latter, that meant: "Do remain clear of the enemy and keep shooting, for God's sake."

The player next to me and I got to play Royal Navy ships. He named his sloop the. . . ah, HMS Peter Pan. Alright. Sure. Mine's the HMS Royal Garter. I leaned over to him and suggested we wait until the neighboring Dutch make their move. I grinned when all three set sail toward the intervening archipelago and the pirates' hideout. “I say, my Dear Captain-of-the-Peter-Pan, let the Dutch engage the pirates first, shall we? We can swoop behind them at a more opportune time and sink the whole lot. The winds are favorable, so let us steer clear of that big Dutch fortress, too.”

With mounting jubilation, I watched the Dutch engage the pirates amid the maze of islands. It would be their death knell. The winds started to shift on us, but I maneuvered to exchange long-range fire with one of the Dutch. Heh. I had “long” cannons. He had “light” ones but more of them. He fired first, that swine. Missed. I responded at once. I knew I hit something, but one of my weapons misfired horribly and exploded, killing the hapless gunnery crew. Drat! It must have been an Irish cannon! There shall be an inquiry! I ordered more crew topside to take the place of those splattered across the deck.

All sails unfurled, I made my next move and ended up exchanging broadsides with a second Dutchman. Again, I hit something, but with the distance could not see what. On the other hand, that devil managed to knock out two more of my guns, leaving only one on my starboard side. Worse, the wind had shifted entirely and I would not be able to continue on the present route without tacking furiously. It was pointless. I could not fight with just one cannon, even when firing twice as fast as the pirates or the Dutch. Fortunately, my sloop could turn on a dime and bring to bear a full row of untouched guns, gleaming under the Caribbean sun and eager to thunder.

This time, my prey had found itself in the sort of predicament I'd foreseen early on. My guns bore a direct line of sight through the Dutchman's stern, while two small pirate ships opened fire amidships and across its bow. I released a broadside, all guns hitting the target and raking its deck. It wasn't long before the surviving Dutchman's crew lowered a skiff in a hurry and made for a nearby island with treasure they'd picked up along the way.

The third Dutchman came about to help his surviving mate, the one with whom I'd exchanged fire earlier. The poor fellow was stuck between two islands, locked in combat with a pirate. He'd managed to wreck the pirate, but not before the latter rammed his ship, allowing its crew to board. With a bloody melee raging aboard the Dutchman, I heaved to and aimed my four guns upon them all. The HMS Peter Pan, whom contrary winds had forced to break formation with me, cleverly maneuvered past the opposite side of the islands, establishing a deadly crossfire on the sinking pirate ship, the hapless Dutchman, and his approaching team mate.

Evil snigger. This would be remembered as a glorious victory for the Royal Navy!

Three hours had gone in an instant. Unwilling to leave the table quite yet, I snapped a few more shots with the camera, packed up, and sailed off into the sunset. Naturally, along the way, I visited many other tables, wishing I had time to play each and every game. Much of the afternoon went by that way.

By chance Janet had also returned to our room. She informed me that  Paul Genesse had invited us for dinner at the Palomino. Onward, then. Another evening with very fine company and good food during which we made new friends and I discovered Paul had been a fan of Mystara since way back! I had no idea. How cool. Meanwhile, Janet managed to twist an ankle, so getting back to the hotel became a bit of a challenge. She limped along, hanging on to my arm as I struggled to keep the umbrella straight in the wind. The weather had chosen that evening to unleash a thunderstorm. The rain was welcome in a way, given the ongoing drought in the region—altogether not unpleasant, just uncomfortable.

I'll let you go through random pictures from the dealers' room and the gamer's hall before moving on to the following day.