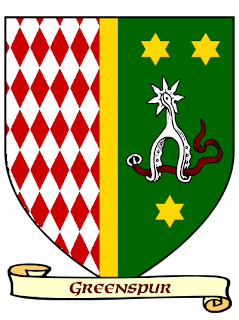 One advantage of being run by wizard lawyers and magical bean-counters is that little room remains for fraud. As a result, most of the realm's earnings are actually spent as intended rather than filling the pockets of greedy aristocrats.  What this means is that a land smaller than Arogansa or Theranderol commands greater financial capability than either. Unfortunately, the lion's share of its revenues, under "Government & Politics," serves primarily to support Greenspur's tentacular Exchequer.

Population density per square mile and urban ratio lie very much within range of its immediate neighbors.  Inflation and cost of living remain low, and farming comfortably allows significant exports to Vertiloch and other destinations.  Much of the excess farming heads north to Aasla or Stonewall.  Aside from its Big-Brotherish bureaucracy and litigious freaks slyly awaiting in ambush, Greenspur isn't a bad place for non-wizards to live.

Greenspur commands smaller ground forces than its neighbors, but its physical borders are relatively easy to monitor.  Three main garrisons guard the east including the Telsatus & Limi areas, and Sequestria, which represent more than half Greenspur's entire army.  The remainder provides law enforcement throughout the realm.  Experienced spies, executors, bounty-hunters, and trained wizard-inspectors form the army's backbone, fulfilling the needs of the Lords Defendar, Justiciar, and Executar, and the Lady Inquisitrix.

As can be expected, a great deal of military budget and effort goes instead toward the navy.  As a result, Greenspur enjoys much greater naval capabilities.  Its 52 vessels, including 11 airships and 7 submersibles, are tasked with patrolling more than 600 miles of coastline.  This easily exceeds what Arogansa or Theranderol can line up.  Emphasis for surface vessels and submersibles lies on the approaches to Eagret, Limi and Telsatus, and the northern shipping line to Aasla. A small force is permanently based on Malfera Island.  Airships watch troublesome forested areas, the border with Arogansa, and the hills around Eagret.  Illegal immigrants, wanted fugitives, and wandering monsters are the airships' main quarries.  Although Greenspur's vessels are relatively light in structure, averaging 106 Hull Points, their crews are generally better suited to seafaring than most others in the region.