This article has been updated and vastly expanded.
>>CLICK HERE<< for the updated version.

This is my first attempt at making a Mystara Gazetteer-style map.  It isn't perfect, judging for example from the use of the basic Arial Black font instead of the traditional Feinen Bold.  I haven't acquired the latter yet, or a close equivalent.  Map icons aren't quite correct either.  I used the free version of Hexographer (after a few false starts and software glitches) with finishing touches on Windows Paint.  The title font, Abaddon, was freeware material I found on the internet, so anyone can actually make maps like this.

Time-allowing (time always is the challenge), I plan on reworking areas previously mapped for Mystara which are almost featureless.  This new map is a rendition of the Province of Ambur, in the Northeastern corner of mainland Alphatia.  The original map had been completed at a 24-mile per hex scale.  The new one was replotted at the more useful 8-mile per hex scale.  I've added lots of visual features and made up a number of details and names, just for the heck of it.

Your comments are welcome, naturally.


Edit--and now we have the illustrious Thorfinn Tait's updated version: 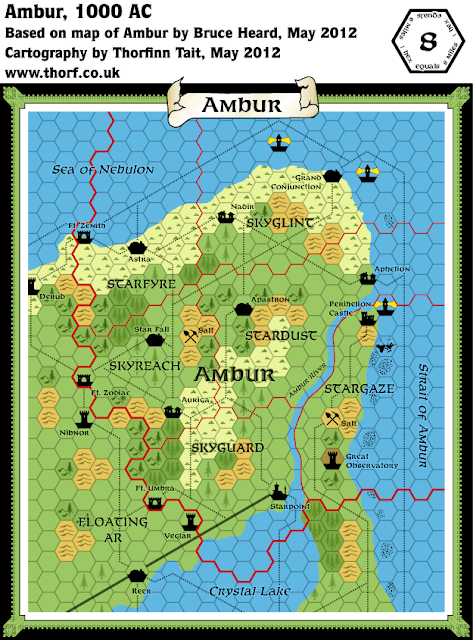 Re-Edit:  Naturally, since then, I've updated my map with extra details, and added a closeup of the Starpoint area: