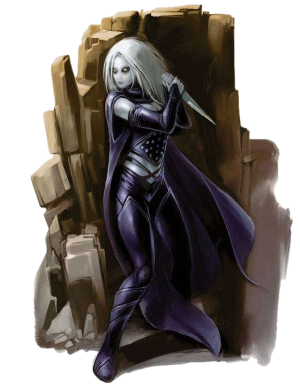 This creature fell victim to a magic jar spell centuries ago. The perpetrator is an ancient wand named Veneer of Aldor Blistimorio. She had reached self-awareness when her maker bestowed upon her a splinter of his soul. She became orphaned decades later when her evil owner died in a far-flung dungeon. Unsatisfied with her vulnerable shape, Veneer cast a magic jar spell upon Aldor’s ring. A doppelgänger named Sahāru Darkminstrel stumbled across the ring and promptly put it on, only for its mind to switch places with Veneer’s. Satisfied that she could still cast magic, Veneer learned to coexist with Sahāru’s living body. The vacuous wand and the ring holding Sahāru’s mind were carefully hidden, after which the host and its visitant spirit departed.
The victim lived on for more than 100 years during which Veneer’s mind learned how to do what a doppelgänger does best. To fortify Sahāru’s body and prevent it from aging, Veneer endeavored to capture others of her kind and devour their enchantments. Each time Sahāru breaks a wand, it inhales its magic and becomes ever more powerful. Wand makers using their detect wand and eldritch perception abilities near the host would sense Veneer’s presence as a wand, even though her native device lies hidden in a far-away dungeon. It is the reason she secured an amulet preventing magical detection.

Sahāru of Veneer: AC –5 (unarmored), HD 30, MV 90’ (30’), AT 1 bite or +2 dagger of slicing, Dmg bite d12 + venom or see Equipment below, Save as MU22/19; Size M—Int 19, Cha 16 (in human-like form), ML 8, AL Chaotic Evil (OSR Chaotic). Age: 200+ years. Faith: None.
Abilities: Shape-changing as a doppelgänger. Paralyzing venom (–3 penalty to saves; lasts 2d4 turns). Level 9 thieving skills (except backstab). Immune to mind-affecting magic. Detects wand and exerts eldritch perception as a wand maker level 22/19. Spellcasting up to 6 spells of any level per day cast as a level 22/19 wand maker (see From Apprentice Wand to Artifact in Pt. 2); double-casting one spell up to level 5 once per hour as a mercury wand (see Otherworldy Wands in Pt. 4). Telepathy 192 miles radius. Telekinesis at will cast as a MU14. When draining wand magic, the doppelgänger regenerates +3d6 hp per wand rating and permanently earns +1 HD per wand rating. While possessing Sahāru’s body, Veneer crosses a new experience threshold with every 5 new HD the host earns.
Equipment: +2 dagger of slicing (kills with a critical hit unless the victim saves vs. Death in which case the dagger inflicts triple damage); amulet of protection against scrying and magical detection.

Unintended Consequences: Aldor was a minion of the Blood Circle. His colleagues harvested his soul in a ritual after they found out he had passed. When they sensed a sliver was still missing, they searched for his wand, intending to release the remaining spirit fragment so their dark endeavor could be fully completed. They eventually found his remains long after his death, but not the wand or the ring. Another party is looking for the wand as well: the red dragon Eldur, whose blood had been used to enchant the device without his assent. Eldur, an ancient and far more powerful being now than he was when Aldor tricked him into sampling his blood, wishes to destroy the wand, and if aware of Veneer’s existence as Sahāru, would hunt down the doppelgänger as well. If unable to achieve his goals, Eldur may turn his wrath upon the whole of the Blood Circle. The vacuous wand ended up in the possession of Master Jarny Valdezar, a wand maker from the Star Shadow guild. He seeks to reunite Veneer and her native device, seeking Prestige from this achievement. The ring found its way to the left hand of Auria Liquescent, a telepathic sorceress who fell in love with the curious mind trapped inside. Thoroughly beguiled by his poetic and musical skills, she now searches for Sahāru Darkminstrel’s stolen body. The ring itself is one of delusion that delights in making its owner believe it holds a feather falling dweomer, the very reason Master Aldor Blistimorio died when he attempted to use it.
at 10:52 AM