Advancement
The wand maker is a magic-user specialty class. Two experience tracks are provided in its advancement table, one for D&D becmi (b/x, Classic, etc.) and the other for the AD&D Game, both 1st and 2nd Editions. Adjust as needed to adapt this material to later game versions. Crafting Ability determines how good a wand the maker can enchant. Conventional wands (such as wands of lightning bolts) and wands rated +4 require at least experience level 9 to enchant, as per both standard game mechanics. 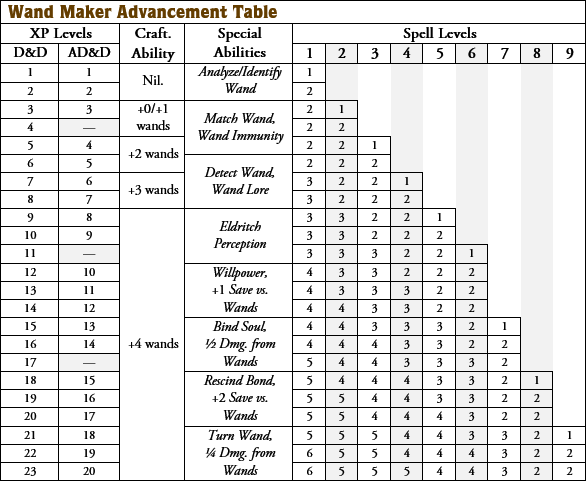 Analyze/Identify Wand: This ability requires an Intelligence check. A failed roll negates this ability until the following day. The targeted wand must be held in hand and closely examined for 1d4 rounds. If successful, the ability reveals a wand’s core components, the nature of its maker (demi-human, human, dragonkind, or some other race), whether it is bonded or subject to an active DRM, its rating, pliability, requirement, preference, affinity, resonance, command word (unless blocked by a DRM), wand name, and whether it is sentient.

Bind Soul: Wand makers may use a fraction of their own spirits as their personal wands’ core components. The soul-bound wand immediately becomes self-aware or it earns +1 to its Intelligence if it already was sentient. If the wand is ever destroyed, the wand maker immediately loses 1 experience level. For a fee, a wand maker may bind willing customers’ souls to their wands.

Detect Wand: The presence of any wand within a 30’ radius can be sensed. The ability requires a d8 roll under the wand’s rating +2 (or under the bsl it holds +2). In other words, powerful devices are easier to sense than weaker ones.
For example: A wand maker enters a tavern; three other spellcasters are present—one with a +1 wand, the next with a wand of fireballs, and the third with a +4 wand. The d8 score is 5. The wand of fireballs (level 3 spells; 3+2 = 5) and the +4 device (4+2 = 6) are detected, but the +1 device isn’t (1+2 =3).
If the roll succeeds, the wand maker locates the detected devices’ approximate positions. If analyze/identify or wand lore had been performed on them earlier or if they are listed in the maker’s book of wands, these devices are recognized as such. Extra attempts to perform active detections during the same day incur cumulative +1 penalties. A failure negates the ability until the next day. At the referee’s discretion, passive detection is possible but requires a d12 rather than a d8. Obstacles, such as walls or doors and containers add +2 penalties each to detection rolls.

Eldritch Perception: Like a forensic technician, a wand maker can detect whether wand magic was discharged within 30’. Actively seeking to detect wand magic requires an Intelligence check. Passive detections (rolled by the referee) incur a –4 penalty. Extra attempts to perform active detections during the same day incur cumulative –1 penalties. A failure negates the ability until the next day. Once triggered, the ability lasts 20mn x the wand master’s bsl (thus, the maximum duration is 20 x 9 = 180mn or 3 hours).
Wand magic leaves residual traces lingering up to two hours per spell level, or [1 hour] x [(wand rating +1) x3), whichever is longest. Add up durations if multiple exchanges took place. For example: while dueling, one magic-user (a) cast a hold person spell using a +0 wand, (b) which another deflected using a +3 wand, and (c) subsequently disarmed the attacker; total lingering time: (a) 6 hours, (b) +12 hours, (c) +12 hours = 30 hours.
Residual traces mark the body and clothes of anyone present at the time wand magic was cast. The discharge leaves a trail when spellcasters depart the affected area, which the wand maker can track. The wand maker can sense which trail is the strongest if more than one. Weather conditions have no effect on residual traces. The wand maker can also determine how many wands were involved and, if they come into full view, match wands with their residual traces, much like fingerprinting, so long as eldritch perception is active at the time. Each wand possesses a unique eldritch signature in addition to its resonance, which can be perceived as well (see Resonance in Part 3).
Furthermore, the wand maker can match a “smoking wand” with its user and can sense whether anyone else they see was a target or a nearby witness present at the site of the discharge. Rolling separate attempts at different times to achieve any of the above is acceptable. The “scent” of detected wand magic is not forgotten between separate rolls. With a successful check, a wand maker can recognize a scent when running across it again years later. This ability came originally from CAL3 Alfdaín Ascendant.
Dispel magic will wipe clean all residual traces within the spell's area of effect. This spell, however, does not affect trails extending beyond its limits, which remain visible provided people present at the time wand magic was discharged hadn't already left before the residual traces were dispelled. Obstacles blocking the wand maker's line of sight (such as doors and walls) may also conceal a trail lingering outside a dispelled area. Eldritch perception does not require light to reveal residual wand magic.

Match Wand: The wand maker possesses the innate talent of finding the wand in stock, if any, best matching a client’s needs. If not in stock, the wand maker knows what wands should be good matches (material, shape, core components). Clients must be present for a wand maker to gauge what kind of people they are and what they seek. Clients usually want to try a wand (at least roll against its Pliability) in the storefront’s spellcasting space before completing their purchases. The wand maker must deactivate any embedded DRM and restore it after testing; a command word discreetly whispered is enough.

Rescind Bond: The wand maker eliminates a bond from a non-sentient device belonging to someone else. Rescission is performed despite an owner’s will, usually as the result of a legal court order against a convicted criminal. An unscrupulous wand maker could also perform the deed illegally, with the intent of reselling the stolen goods. The only trouble is that the wand most likely still bears its maker’s mark and name, which can’t be removed without destroying the wand. Authorities may order a confiscated wand to be sold at an auction for the benefit of a convict’s victims. Rescinding a sentient wand requires a Willpower check between the device and the wand maker.

Save Bonuses & Damage Reduction: These bonuses may or may not apply to all situations. Saving throw bonuses are not cumulative. Damage reduction can be further augmented when combined with spell effects such as protection from fire, or as the result of successful saving throws also calling for reduced damage.

Turn Wand: Once per encounter, the wand maker can repel wands somewhat like a cleric would turn undead. The ability requires a Wisdom check. If it succeeds, the offending device(s) within a 120’ radius cannot point toward the wand maker for the remainder of the encounter. The attribute check receives a penalty equal to the wand’s rating x2 or to the bsl it holds. For example: turning a +0 wand incurs no penalty, a +1 wand a –2 penalty, a wand of fireballs a –3, and so on. If the wand possesses telekinetic capabilities, it may try to flee unless its owner succeeds a Strength check.

Wand Immunity: If it were used to attack or put at risk its maker, a sentient wand’s Willpower would increase +2d8 and domination checks would be mandatory for each threat (see Wands with an Attitude, Pt. 2). NB: As a general rule, no wand, sentient or otherwise, can affect a creature whose spirit was used as a core component.

Wand Lore: This ability identifies a wand’s past and present owners as well as circumstances for their changing allegiances. The wand must be held in hand for 1d4+1 rounds. Lore can go back many years, as follows:
[2d12 years] x [wand maker’s bsl] x [best rating wand maker ever crafted +1]
For example: [Score 13] x [level 5 spell] x [+3 wand +1] = 260 years. If within the date range, the ability reveals when and where a wand was crafted as well as when, where, and how new owners took over. Roll only once per studied wand. The wand maker needs to earn another experience level before rolling again on the same wand.