About a week ago, I started showing the process I follow to design a city (click here for Part One). As promised, here are the next few steps.

The biggest task consists in drawing streets and open spaces with white lines. You can already tell where main districts may be located. 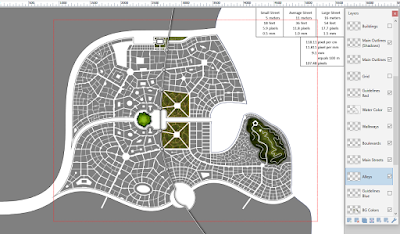 The old town huddles next to a big hill, just south of the port area. A fortification stands on the hill, dominating the harbor and its entrance. Low and lower-middle-class neighborhoods lie east of the cliff's edge. West of the cliff is where middle and upper classes reside, with the wealthiest buildings and those housing the realm's government facilities closest to the giant tree. Two forested parks straddle the large waterfall at the city's center, each with a mausoleum in its middle. Suburbs, hamlets, some forests, and farmland will occupy the west and south river banks. Here's a closeup of the center area. 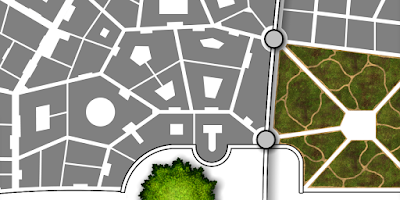 The next step takes all of 30 seconds, which consists in an automated command adding a thin black outline around the white lines showing the streets. Zap! 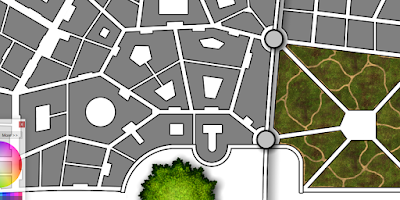 The key to all this work is to rely on different layers for most things. Moving right along, the next step knocks out the white color from the map. That's even faster than adding the outline. The intent is to remove anything that would mask the color and texture of the streets in the next stage. Zap #2. 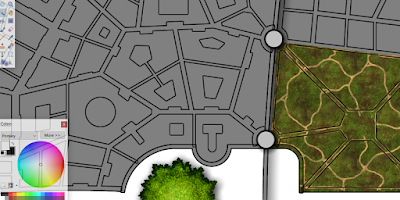 Now comes the more exciting part: adding color and texture. A light, gray/beige, gritty texture will do fine for streets and open spaces. At this scale, showing a cobblestone pattern is absolutely futile. A neutral blue for the river and pool is easy enough. I added a bit of green here and there for gardens and inner courts. It's important to fill in colors and textures on layers beneath the one with the outlines. Since this is a raster image, trying to add color on the same level would make the black outlines look really ragged. Plan ahead. Make backup copies of previous versions in case you can't fix a problem spotted too late in the process. Some editing will correct small details, such as intersecting outlines that were not visible earlier beneath the white layers. And voilà! 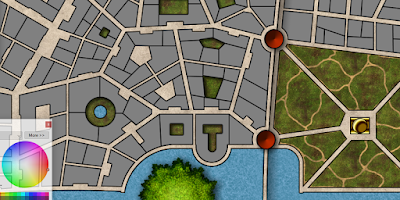 Various colors will replace the buildings' boring gray background. These will serve as a color code to locate the city's various districts. I added thin black lines to delineate adjacent buildings within city blocks. Surely, you're getting the point by now. Definitely easier to look at with the extra bits too. A later step will add more detail such as bridges for sure, extra towers, trees, the harbor's breakwater, docks, piers, ships, boulders alongside the seawall, and so on. Given the size of the city, it'll take a while. Patience is key.
Click here for Part Three.
at 2:10 PM