This chapter is a work in progress. Honestly, the Combat Sequence ought to have been numbered 5. (not 4.4.) So this section will eventually become 6. Just being a tad OCD. Sorry. Flying right along now.


All ships and monsters are listed separately on playing cards.  Each card displays a point of sail diagram appropriate to the ship or monster, its class rating, armament, natural attacks, special abilities, and other useful game statistics.  The front of the cards shows an illustration and, if appropriate, the location of deck weapons.  Until further notice tiles can be used to represent ships and monsters on the playing surface.  Cardboard counters should be used to show which piece has moved or made its attack.

The icon located in the upper left corner of the Points of Sail table shows what sort of skyship is depicted.  In the sample shown here, it is a tri-masted galleon with 3 sets of three masts, adding up to nine (three masts upright, three outrigger masts on starboard, and thur-ree more portside pretty please).  Later in this chapter, an assortment of cards, front and back, will be provided for the sake of playtest. 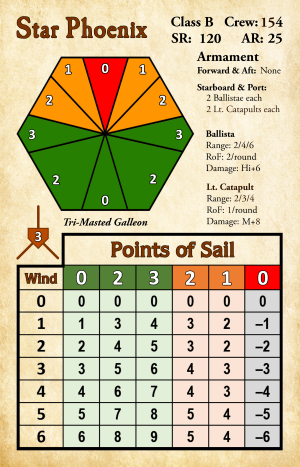 In the real world, the crew on sailing ships often numbered more than a hundred, if not several hundred.  In a fantasy game context, this isn’t practical or even desirable, especially with vessels featuring two to four times more masts and sails than seagoing ships.  Assumption must therefore be made here that a skyship’s rigging is at least partially enchanted or mechanically enhanced to warrant fewer sailors than it would otherwise demand.  Certainly, elven vessels, which can grow weapons right out of their ships’ decks qualify.  If you haven’t already, do engage disbelief-suspension mode and, with your tongue firmly planted in your starboard cheek, make full sail and embrace the following staffing guidelines.

5.1.1. Sailors:  Universally known as airmen in Calidar’s universe, they number anywhere from 3 to 20 topfolk per mast.  The low end corresponds to vessels with triangular sails whose rigging carries some enchantment or who are fitted with winches and other mechanical devices.  The high end includes tall masts holding multiple square sails.  Sailing skyships often use sails located well below deck merely as stabilizers rather than full wind-bearing surfaces, as they are harder to access.  These types of sails require no additional crew.  Alorean clippers need the fewest topfolk due to their semi-sentient skyships’ ability to respond to mind suggestions.  Thus, for a Calidaran tri-masted galleon with three sets of three masts, topfolk could number about 90.  Add another 20% for other deckhands and specialists, bringing the total to 108.  For a mechanically propelled vessel, such as a dwarven ironclad, count 4-9 stokers for every 50ft. of ship length (rounded up), plus 20% for deckhands and specialists.

5.1.3. Marines:  If marines are present, assume an additional tenth of the vessel’s airmen (round up to the next 10).  The Star Phoenix would have 20 therefore.  Include rowers when calculating the number of marines (see 5.1.5).  Skyship military are referred to by various other terms in Calidar’s universe.  For example, the dwarves of Kragdûr don’t have seas, so they call on-board combatants empeers.  Elves of Alorea prefer aëreenes, a duty often entrusted to winged elves.  The Munaani dispatch men-at-skies on their vessels.  Draconic knights often refer to their shipborne mates as dragoons.  On Calidar, the correct term is airvaliants, though Belledor gnomes fancy the label skyship troopers.  On Lao-Kwei, they are known as wind swords, or fēng zhǔ, while on Kumoshima, they just call them sky troops, or in the vernacular, kūheitai.  As for Ghüleans, they are best described as skyraiders, sworn enemies of the Wayfarers’ himinnsverd.

5.1.4. Officers: Allow for at least one captain and a first officer.  If there are marines aboard, allow for one extra commander.  Other officers number one for each 50 crew.  In total for the Star Phoenix, this adds up to 148 crew plus 6 commissioned officers.  Petty officers and officers of the warrant are counted among specialists.

5.1.5. Rowers:  A lightweight galley could have 8 rowers for every 10ft in overall length, while a war galley could hold twice as many for the same space.  A typical Wayfarer longship counts as a light galley, except rowers and airmen are the himinnsverd—thus, a small twin-masted vessel about 60’ long (1 set of 2 masts) would have about 48 oarsmen plus 7 airmen who form the vessel’s complement of 55 himinnsverd, plus 2 leaders.  On giant, spacefaring Wayfarer longship, these numbers could easily be doubled.

5.2.1. Dirigibles & Aeroliths:  Flight may be achieved with minimal magic, using gas-filled balloons.  In the real world, these types of skycraft can’t lift a whole lot of payload unless the carrying envelope is truly huge, such as WWI Zeppelins—though one might expect just the thing from crafty gnomes.  For the sake of including aerostats lifting improbably heavy loads, there should be a precious gas than can be found in isolated regions throughout the Calidar universe (yes, it’s always gotta be someplace hard to reach and dangerous, otherwise, what’s the fun?)  Let’s call it mirthium for now, a name it earned from its effect on one’s voice when inhaled, provoking a jocular reaction among anyone else listening.

Mirthium, in its gaseous form, defies gravity quite effectively, making most fantasy dirigibles at least somewhat believable.  When it escapes from the soil where it is trapped, it eventually flies up to the Great Vault where it dissipates.  Thankfully, this property is temporarily lost when mirthium is compressed.  Such can be conveniently achieved by way of pumps and magical receptacles for the sake of transport, sale at a skyport, and stowage aboard aerostats.  Mirthium’s strange property also diminishes to a certain degree with altitude.  This limitation makes it difficult for dirigibles to reach the Great Vault.  It also explains the existence of aeroliths: anything from floating boulders to airborne islands. Depending on how impregnated with mirthium an aerolith is, it settles at a certain altitude and drifts among the clouds at the whim of the winds. 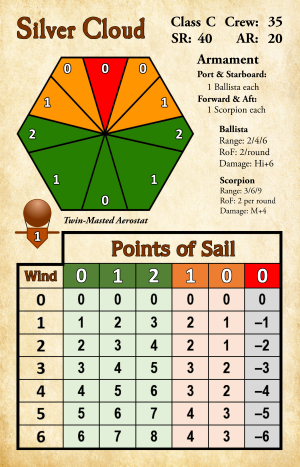 In the Calidar universe, aerial navigators should beware of drifting rocks, especially in clouded conditions.  Most realms demand, by law, that they be reported at once so they may be towed away.  Some judicious realms fit them with air anchors and build lighthouses or fortifications upon them, both to warn oncoming traffic and (more likely) to keep an eye on who flies by.  The Kingdom of Meryath currently has open offers for good size derelicts, which authorities have been positioning above main cities.  Roaming rocks are popular with wizards of Caldwen and various military around Calidar’s universe.  Enterprising merchant princes of Osriel have also started new ventures, setting up shop (typically overpriced) intended for traveling skyships whose captains seek to avoid lengthy approach and docking procedures at congested skyports.  Discretion may also be another motivation.  The Araldûras Roaming Rocks Salvage Enterprise, often the butt of jokes among skyship crews, uses fetzgrim-powered, smoke-belching tugs to tow large aeroliths in the sky or in the Great Vault for handsome profits.  Competition can be fierce among such businesses, and sometimes lethal, as no one can ever be sure of what may be using a roaming rock as its lair.

Dirigibles and small aeroliths can be fitted with sails, in which case they follow movement rules for sailing skyships (treat as Class C).  These skycraft must have basic enchantment favoring movement along their centerline, otherwise navigation would not be possible.  Others rely on mechanical devices, such as engines and propellers—therefore with an innate MV rating (treat as Class B).  Self-propelled dirigibles and aeroliths do not require a centerline enchantment, but in this case they are subject to drifting in crosswinds, as shown in Table 13.  In order to travel through crosswinds, such vessels need to correct their courses on a regular basis.

One might wonder whether it would be wise to bring aerostats to a battle.  Many a landlubber unaccustomed to life in skies fears containers filled with mirthium are vulnerable in combat.  Gas bags are often made of giant spider silk.  It is resistant to blunt projectiles, usually those with a parabolic trajectory (see 4.1. Deck Weaponry), which will bounce off harmlessly.  Should they sustain piercing or slashing damage, mirthium balloons are woven in such a way to house independent cells, preventing sudden loss of contents.  Patches can be applied during flight (provided a tamed giant silk spider does not reside aboard for this purpose), and gas pumped in through hoses from stowage canisters.  Fire damage is no more likely to destroy a good quality silk weave than the rest of the skyship.  Of course, giant spider silk does not come cheap, but even with mirthium it is more affordable than permanently enchanting a skyship.  Nonetheless, aerostats aren’t battleships—they can survive a battle, but they remain somewhat more fragile than dedicated warships.  An aerostat’s SR corresponds to its nacelle rather than the size of its inflated casing.

Your feedback is helpful.  If you enjoy this series of articles, plus them or share them.  Thank you.
at 7:01 AM