It’s been a while since I began looking into how to make air combat between skyships to become more practical than the few steps already sketched out in CAL1 “In Stranger Skies.”  This also involves monsters and for that matter anything airborne, including flying saucers. I do have a system, or rather an early draft of a system, which covers all this ground, much in a style that would be fitting to Mystara’s Voyage of the Princess Ark.  Here’s what I would like to do.  While my present kickstarter is ending later today, I’m posting a first section of these combat mechanics right here.  I’ll add more in the coming weeks.  I’m releasing this to the public for the sake of playtesting or feedback.  This process will take probably a year. 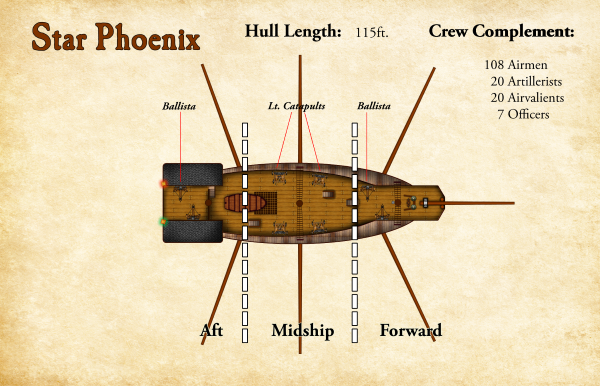 Between now and then, I need to write CAL2, the new and as-of-yet-untitled Calidar gazetteer about the Magiocracy of Caldwen.  Expect this one in 2018 if I’m still of this world.  After reaching this milestone, I plan to put together the final version of these air combat mechanics in book form, with lots of extra goodies (deck plans, ship descriptions, profiles, NPCs, new monsters, stories and legends, ship equipment, adventures, ship-building mechanics, etc.)  This will be CC2 “Yet to be Named—Suggestions are Welcome.”  (Boaty McBoatface’s Big Book of Boats, Barges, and Battleships is not an option.)  Bear in mind that much of what I write here includes a lot of design explanations.  These were important to me while I developed the mechanics.  In a final version (should this one survive at all in its present form), these design insights will go into an appendix, leaving just the mechanics.  So here we go.


Here is an attempt at bringing together mechanics for skyship combat that should work with most established fantasy monsters.  It is necessarily more complex than today’s trendy stand-alone tabletop tactical games (otherwise known as Tea for Two), because it is intended to connect directly with existing role-playing games (and tea lovers.)  For this to work, I reduced skyship speeds from what was stated in CAL1 “In Stranger Skies” to bring them on a par with role-playing games’ monster statistics.  For the sake of simplicity (nonetheless), movement rates (MV) and ranges will be expressed in hexes (100’ feet scale), as opposed to feet, yards, or miles per hour.  A tabletop surface with a 1.5” or 2” hex grid will be needed.  Ships (monsters, etc.) will be represented by tiles on the tabletop surface (or minis, if ever this becomes an option) and players' cards showing maneuvers and combat stats.  I’ve managed to preserve much of CAL1’s skyships concepts although much streamlined, which is the good news here.  There are now two ways of measuring time:

The first thing to do before running an encounter is to pick wind direction and strength deliberately, or roll randomly.  For direction roll 1d12 and check the wind Diagram 1.  For wind strength, roll 2d6, halve the result rounding down, subtract 1, and check the result on Table 1.  Setting the altitude of the encounter may also help (if optional altitude mechanics are in use.)

During the course of an encounter, wind may shift.  Before the game starts, if possible, a referee should secretly roll 2d8.  This score indicates the number of Battle Rounds present conditions should last.  At the beginning of the round when conditions are due to shift, roll 1d6 for wind direction: with a 1, the direction shifts one notch counterclockwise, or clockwise with a 2.  Do the same for wind strength: with a 1, wind strength decreases one notch; it increases with a 2.  Roll again secretly to see how long the new conditions will last (and so on.)

For the sake of simplicity, all fractions in this chapter are rounded up.

This section describes horizontal movement, expressed in MV rates.  In most cases, MV rates reflect wind strength combined with a skyship’s sailing efficiency, or innate movement rates when wind power is irrelevant.  Speeds can vary drastically from one Battle Round to the next.  Game mechanics devised here are fairly detailed because they are an extension of role-playing game mechanics, combining nautical and flight concepts applied to sailing skyships (common in the World of Calidar), a wide variety of monsters, enchanted devices, and machines such as fixed-wing aircraft or steam-powered dwarven dreadnoughts.  This detail provides opportunities for wildly different combat tactics.


3.1.1. Sailing Skyships:  Most skyships in the world of Calidar rely on sails for horizontal movement, and therefore their speeds vary a great deal depending on their headings relative to prevailing wind direction and strength.  Hull enchantments provide controllable lift and favor forward motion parallel to their centerlines, without which skyships would otherwise drift uncontrollably in the direction of the wind.  Diagram 2 shows how wind affects a sailing vessel’s speed. 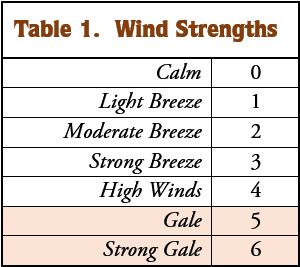 To find a sailing skyship’s MV rate, add the wind’s strength to the number printed on the skyship’s windward side.  For example, assuming a moderate breeze, a beam reaching skyship would enjoy an MV of 5 per Battle Round (beam reaching modifier 2 PLUS moderate breeze 2 = 4 hexes.)  On the other hand, with a strong breeze directly astern, a sailing skyship would have an MV of 3 (broad running modifier 0 PLUS strong breeze 3 = 3 hexes.)  Under calm conditions, there is no wind, and sailing skyships become unable to move at all.

Diagram 3 shows how the wind blows in relation to a sailing skyship's heading. With a roll of 3, the wind direction is exactly eastward. A vessel sailing north would therefore be beam reaching. When the wind shifts, a roll of 4 would change its direction to east-by-south, resulting in the skyship's point of sail to become close reaching. A roll of 6 would put the vessel in irons.  The windward side faces the oncoming wind; leeward is the opposite. Portside lies on the left-hand side of a skyship; starboard is on the right.

Not all skyships necessarily have the same point of sail modifiers (vessels may have unique flight attributes.)  For convenience, correct MV rates reflecting headings and wind strengths are displayed on individual reference cards showing skyship or monsters statistics, as indicated on Diagram 4.  Shifting winds at least once during a battle is important as there are 12 points of sails for only 6 hexsides; at any one given time, only 6 points of sails are in play, until the wind shifts, and the other 6 become relevant.  See 3.4.4. when sailing during gale conditions.

3.1.2. Other Skyships:  Wind conditions either do not affect or only partially affect the movement rates of skyships whose propulsion relies on magic or mechanical power.  Flying carpets, dwarven dreadnoughts, paddleboats, galleys, longships, fixed-wing aircraft, (etc.) fit in this category.  Flight enchantments typically allow an innate MV of 5 hexes per Battle Round, though some items and underpowered vessels often are slower.  Effectively, they can move in any direction regardless of wind conditions.

Some vessels, such as galleys, longship, and paddleboats fitted with sails, may be able to combine wind with some other mode of propulsion.  If sails are used in addition to magical oars, for example, apply wind modifiers listed on the outer rim, as shown in Diagram 4.  The broad running 3* modifier applies only if wind strength exceeds the vessel’s innate MV.

3.1.3. Ramming Speed!  Oarsmen can be made to row faster, giving their vessel a temporary +2 MV bonus.  The decision to row faster must be made at the beginning of Phase C (see 4.4. Combat Sequence), but their stamina, as a single group, needs to be checked during Phase D2.  The vessel sustains instead a –1 MV penalty if a stamina check fails.  This rowing penalty remains in effect until the exhausted oarsmen perform no rowing at all for twice as many Battle Rounds as were spent racing, without interruption.  Using this maneuver, a broad reaching galley under high winds could achieve MV 6 before its oarsmen become exhausted.  The smaller point of sail diagram labeled “Sail Only” (see Diagram 4) should be used while oarsmen are inactive, as galleys and longship aren’t as effective as dedicated sailing skyships when moving with wind alone

Skyships relying on engines as their propulsion method can try to power ahead just like a galley, and earn a temporary +2 MV bonus.  Engines pushed beyond their normal use tend to overheat and can breakdown.  Roll on Table 2 during Phase D2.