There are two sorts of fighting: individual hero actions from heroes and ship combat.  This reflects how time is measured, as explained in the introduction:


Much of the information provided in this chapter connects with generic statistics described in CC1 “Beyond the Skies,” pg. 8-11.  Combat actions are primarily resolved according to the players’ chosen game mechanics.  This section provides the detail needed to help understand how effective skyship combat is intended to be in the World of Calidar.

4.1.1. Weapon Types:  Skyships use deck weapons and any other magical attacks available to them.  Monsters use whatever natural attacks and fantastic abilities described in their original role-playing game.  Since it is assumed that combat mechanics will be those from the players’ chosen role-playing game, all statistics provided here will need to be adapted (the generic system in CC1 should help with conversion.)  Hex scale is approximately 100 feet.  Altitude levels also come in 100’ increments.  Table 8 lists common deck weapons used in the World of Calidar. 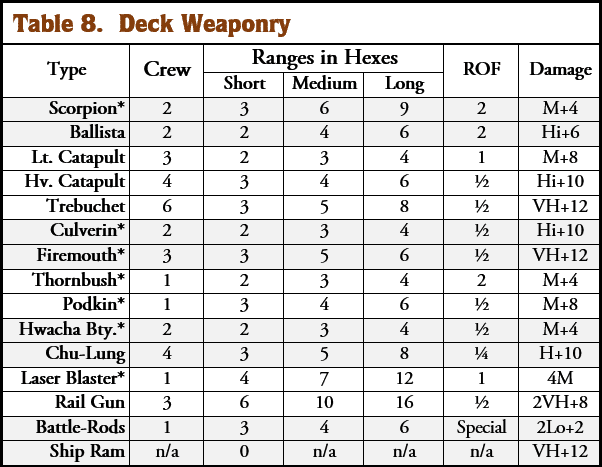 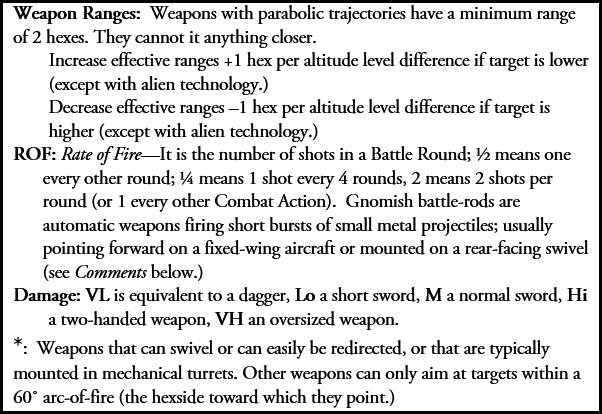 Ship Rams:  Same hex only if attacking vessel rams another; without a purpose-built ram, damage is M+8 to both vessels. Dwarven steam-powered ram open a breach through which marines can board the enemy vessel’s lower deck.

4.1.2. Armor Rating (AR):  A ship’s or a monster’s AR indicates how tough it is to actually hit on a scale of 1-100 (1 being easiest and 100 being toughest.)  AR can exceed 100 as the result of modifiers for creatures well beyond this scale.  The AR percentile scale is intended to help plug ship and monster statistics into a role-playing game’s combat mechanics.

Lightweight or fragile vessels, such as rafts, river boats, canoes, or longships have an AR10 or less.  A typical wooden, multi-decked skyship, such as the Star Phoenix, possesses an AR25.  A dwarven ironclad could reach AR40.  Magic can easily modify these ratings.  As a comparison, the AR of dragons could range from AR35 to AR65 depending on breed and maturity.  Individual ship cards given for the mechanics devised here offer more varied statistics.

Your feedback is welcome.  If you enjoy this series of articles, plus them or share them.  Thank you.
at 6:54 AM