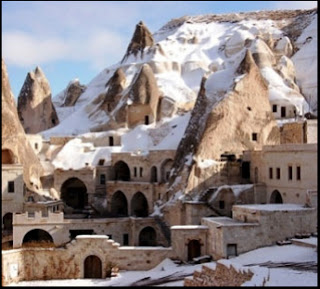 The final article on Stoutfellow includes the capital city's stats.  I'll start with its surface district since the city stretches thousands of feet downward through a mighty stone pillar holding the cavern's vault far below the surface of the sea.

Although thought as a mighty city, the surface district in fact qualifies barely as a large town in D&D parlance, with only 5,000 inhabitants.  The remainder, 25,000 hardy souls, dwell far below.  The uninformed might think of the upper city, Denwarf (Rockborne) as a quaint provincial center lost among frozen peaks, just a few miles from the Aethkul Glacier.  Prevailing winds, blowing from the northwest, bear fierce snowstorms in the winter, which fill Denwarf's many cisterns.  Visitors trek through two mountains trails to the southwest and southeast, which connect with two large valleys.  They bear much of the daily supplies the city requires.  Another trail leads east to Castle Bar-Gimric guarding the border.  Last and treacherous, remains the path to the northwest, through the Aethkul to faraway Draco.  Only the stoutest and the bravest ever come this way.

Hurgon, the lower city, is an entirely different affair.  It includes many different levels carved out of the mountain before reaching the massive rock formation that supports the vault arching above the Denwarf-Hurgon cavern complex.  Along the way, fortified passages control access up and down, including an elevator at the very center.  City life centers upon huge forums and meeting halls for the proud and boisterous dwarves who dominate the lower levels.  The city's layout can be confusing to outsiders, and it is just as likely for a poorly-guided foreign dignitary to stumble upon public latrines as it is to make a solemn entrance into a hall of ceremonies or a mighty temple.  Although much of the city lies within the giant stone pillar, additional structures were also carved on its outside surfaces.  There, semi-circular towers surmounted with delicate spires overlook great battlements, bastions fitted with siege weapons, and narrow, serpentine streets winding through archways and jagged promontories.

Carved Brighstones light much of the inner structure, while residual deposits from the fabled mineral that coat the great stone vault radiate a pale, eerie glow revealing the cavern.  Heavy fortifications and massive gates protect Hurgon's lower extremity, which stands on a circular mesa surrounded by a cliff 300 feet high.  Clusters of farms and hamlets dot the natural terrace and its thick blanket of moss, lichen, and fungal plantations feeding the city.  Two branches of the ice-cold and crystalline Nad-Ithryl River circle round the plateau and rejoin to cascade through a northerly gallery filled with immense stalagmites.  Two stone viaducts guarded with forbidding towers allow the passage of the Dragon Express through the plateau and Hurgon's lower level.  It is rumored that the city extends deeper yet, but if it is true, any details remain well hidden from outsiders and residents alike.  Why it may exist and for what purpose stands as one of the many mysteries of Lower Stoutfellow.

The figure generated above for the length of city walls is incorrect, since Lower Hurgon lies within the confines of a giant stone pillar nearly 16 miles across.  The actual perimeter should be closer to 60 miles, plus any concentric fortifications on higher levels.  In the end, there probably are several hundred miles of battlements and other strongholds spiraling along the city-pillar and up to the vault.  Naturally, little of that is actually occupied, but it may be used as fall-back positions or to address a threat at different depths.  Such facilities took many centuries to build and clearly qualify as one of the world wonders of Mystara.

The same could be said about the square footage of the city, because dwarves believe that nothing is worth building unless it comes with truly colossal proportions, gigantic monuments, and towering columns.  Stoutfellows may be short legged, but they sure think BIG!  Added to this is the need for many huge stairwells, cavernous airshafts, water-retaining pools, and inner-cascades to refresh the citizens.

Not surprisingly for a militocracy, there are five warrior academies, two in Denwarf and three in Hurgon.  The two on the surface concern mountain warfare, especially infantry and siege weaponry.  The other three are about underground warfare.  One is an infantry commander's academy, the second is for military engineering, and the last is for the fledgling elite air arm consisting of skinwing riders.