As my present project moves ahead, time has come to pick a new map style. Before getting into this, here's a bit of background: the third Gazetteer for Calidar focuses on the elves of the Great Caldera. Right from the beginning, it was clear that this book also had to cover the place where elves came from. They did not grow on trees, although the idea crossed my mind. Actually an alien race on the main world, they emerged on a moon gravitating Calidar. After fighting each other and the gnomish wizards who'd created them (!) they eventually sailed across space to land on Calidar, along with their rivals, dwarves and humans who came from their own moons. So yes, there are three moons spinning around Calidar. Very, very loooong story short: the new Gazetteer now has to cover both the elves' realm on Calidar and their moon, Alorea.

Thorfinn Tait pledged his time and talent to render Alorea's map in the same manner as the one he'd produced for Calidar seven years earlier. This does also imply that the next two Gazetteers will each cover a realm on Calidar and its related moon. You can expect lots of maps therefore. I handed Thorfinn the coastal outlines I drafted for Alorea, the general positions of mountains, and the climate zones. From this, Thorfinn generated four topographic roughs, one for each projection style. I posted them here for your perusal.
Which one do you like best? 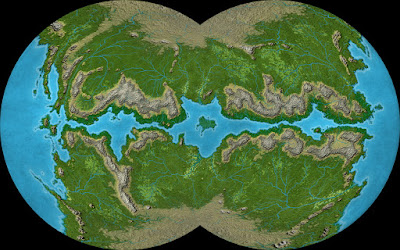 [From Thorfinn Tait:] This is the protection I chose for Calidar itself. Its focus on the central area of the world is perfect for Calidar, as the main Great Caldera region appears front and centre. For Alorea, however, I’m not so sure. The edges of the map look progressively more and more warped, and I’m not sure this fits Alorea’s design so well. 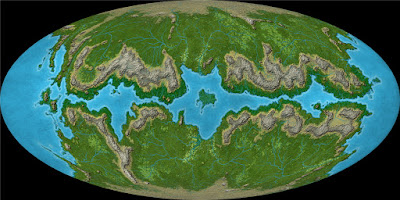 [From Thorfinn:] The oval presentation of the world is rather distinctive. This projection is often used for palaeontological maps of the ancient Earth, and as a result ended up being used for the Mystara setting’s world map. For Alorea, it de-emphasises the poles rather nicely, as these are not really regions of interest in this world. However, the outer edges of the map appear rather warped. 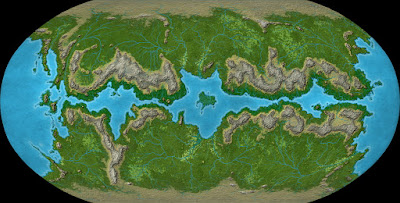 [From Thorfinn:] An old favourite projection dating from the 1960s, Robinson is now slightly out of date, which can be a plus when dealing with fantasy worlds. It does a good job of rendering the mid latitudes without too much warping, while not placing too much emphasis on the poles. It seems like a natural fit for Alorea in many ways. 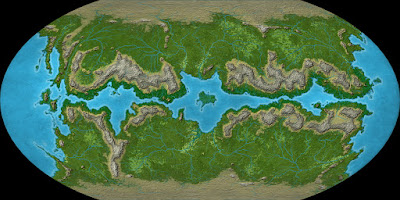 [From Thorfinn:] A more modern take on the same concept as Robinson, and the similarity is pretty striking. The main difference for our purposes is in the depiction of the poles: Winkel Tripel places more emphasis on these areas. As such, it seems like an inferior choice to Robinson for Alorea.

[Back to me:] You're welcome to vote in the related poll, or to comment about these maps. Now's a good time to let us know what you like or don't like. I posted the poll in Calidar's Facebook group (click here to visit).

Finally, I added my original draft below, the climate map itself. Thorfinn will be bringing this one to the same standard as the one produced for Calidar years ago. [From Thorfinn:] This is the base projection, a simple 2:1 rectangle with a regular grid for latitudes and longitudes. It’s essential for creating 3D renders, as it is the projection used for the texture of a sphere in 3D software. As a map, however, it’s far from ideal. Like Mercator and all other rectangular projections, it stretches the poles mercilessly, although the mid latitudes look okay.


[Back to me:] The info below provides rough data on the various climate zones. Temperatures given in these descriptions are seasonal averages. Unusually high and lows are always possible. Countless micro-climates are also possible in limited areas, as a game master may need.

Rainforest: Thick tropical wilderness is located on either side of the continental seaway, close to Alorea’s equator. Wet condition last year round except in monsoonal areas. Meruín elves dwell along the shores, while the Sherandol typically take to the forests. Winter Low: 68˚F/20˚C. Summer High: 93°F (34°C).


Tropical Uplands: Bordering rainforest or savanna on the foothills of mountains. Trees are densest along rainforest, getting sparser as altitude increases. Dry weather prevails in the winter, especially in monsoonal areas. Winter nights may experience frost. Elëan elves have claimed these foothills along with anything at higher altitude. Winter Low: 48°F (9°C). Summer High: 75 F (24 C).


Desert: Located in tropical areas sheltered from winds at the foothills of mountains, hot wastelands are rare on Alorea. What little rain falls in these regions quickly evaporates. Temperature swings between day and night can reach 40°F (22°C) in summer. No elf enjoys such desolate places, although talk of criminals, pariahs, and descendants of past invasions hiding there regularly emerge. Winter Low: 40° (5°C). Summer High: 103°F (39°C).


Teosian-Temperate: Similar to Teosian-Hot, but cooler and possibly subject to foggy weather. Snow is rare at low altitudes, but not uncommon on foothills during wintertime. Thick pine forests may prevail inland. Elves of all sorts enjoy these lands. Winter Low: 41°F (5°C). Summer High: 76°F (24°C).


Westlands, Coastal: A west-coast climate influenced by the presence of an ocean or a large sea, with a cool, wet winter and a mild, somewhat drier summer. Pine trees dominate local forests, with mosses and ferns. Meruín elves outnumber all others in these regions. Winter Low: 36°F (2°C). Summer High: 73°F (23°C).


Westlands, Sub-Alpine: Similar to the coastal climate, but cooler due to the elevation and without a noticeably drier season. Pine trees and rhododendrons prevail on foothills, with spruces and larches higher up. This is a realm of Elëan elves. Winter snow is abundant at altitude. Winter Low: 28°F (–2°C). Summer High: 59°F (15°C).


Eastlands: The oriental side of Dardasyl and Ellomar feature hot summers with thunderstorms and occasional tropical cyclones, and mild winters. Eastlands do not enjoy noticeably dryer seasons. Deciduous forests dominate the Eastlands. The Sòldor elves have taken to this region of Alorea, although Meruín elves are common along the shores. Winter Low: 34°F (1°C). Summer High: 84°F (29°C).


Heartlands, Cool: Similar to its warmer variant, colder Heartlands cover a large part of both Dardasyl and Ellomar due to elven manipulations of the biosphere and the response from Alorea’s world soul. Hardwood and mixed stands prevail. Mild summer and long, cold winters are the norm. Snow cover lasts 3-5 months. Sherandol and Tolarin elves are in the majority in these great plains. Winter Low: 14°F (–10°C). Summer High: 76°F (24°C).


Taiga: Some of the coldest areas at the polar circles. Boreal growth includes mostly low-density forests of conifers like spruces and larches, as well as mosses and lichens. Indigenous tribes include Tolarin elves with a Sherandol minority. Winter Low: –21°F (–29°C). Summer High: 70°F (21°C).


Eternal Frost: This climate occurs well within polar regions or at the highest altitudes. Legends exist of ice elves dwelling there, but expeditions on foot or via skyship have failed to prove their existence. Nothing grows inland, and wildlife clings coasts or lower elevations on mountains. Winter Low: –97°F (–72°C). Summer High: –17°F (–27°C).

If you found this article interesting and are unfamiliar so far with Calidar, click the tabs at the top of the blog page for more information. The next kickstarter for this Gazetteer should be taking place late winter/early spring 2021 essentially to pay for the cover art and internal illustrations. Along with the Gazetteer, four other titles should also be lined up, if the crowdfunding is successful. These will be conversion guides for OSRIC and Labyrinth Lord, a player's handbook, and an adventure book. See you at the top!
at 7:14 AM