When Old is New 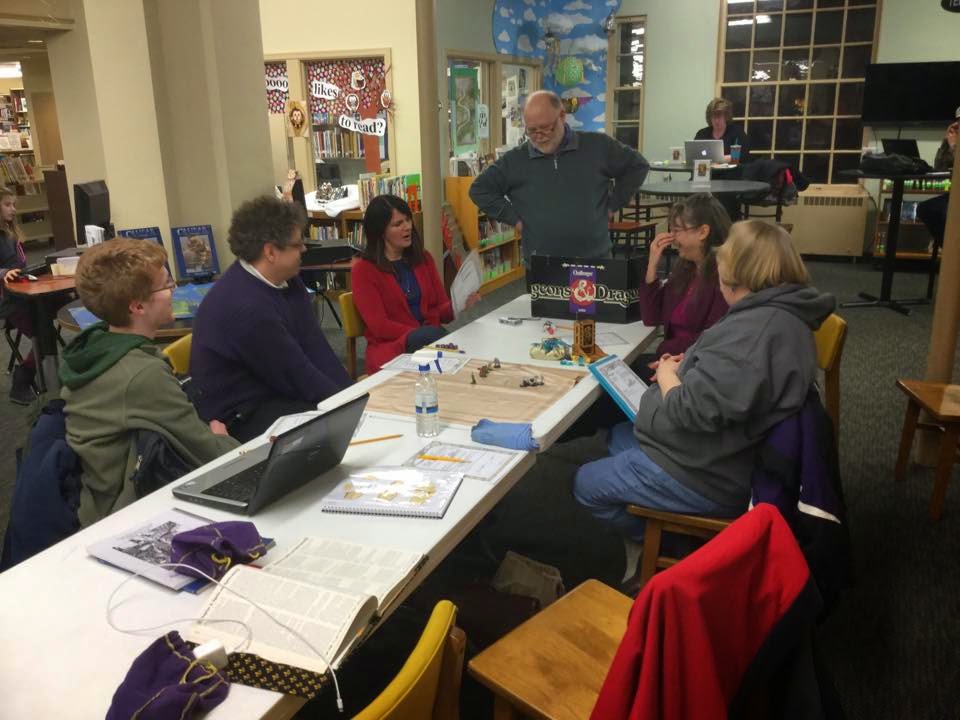 “Lair of the Vipermen” was a fun idea for a game demonstration at the Burlington Public Library introducing the World of Calidar.  The adventure, which borrowed mechanics from the D&D game’s old Basic/Expert version, took place on January 15th.  The “dungeon” was fully written in advance, with an eye toward possibly publishing it as a standalone title later.  I’d made myself a promise to keep things short and sweet.  I succeeded, kind of.  The adventure still features three levels and some outdoor adventuring in the foothills of Meryath’s Matai Nui range.  Long story short: a second session will be needed to complete the party’s foray, and perhaps a third to complete the whole adventure. 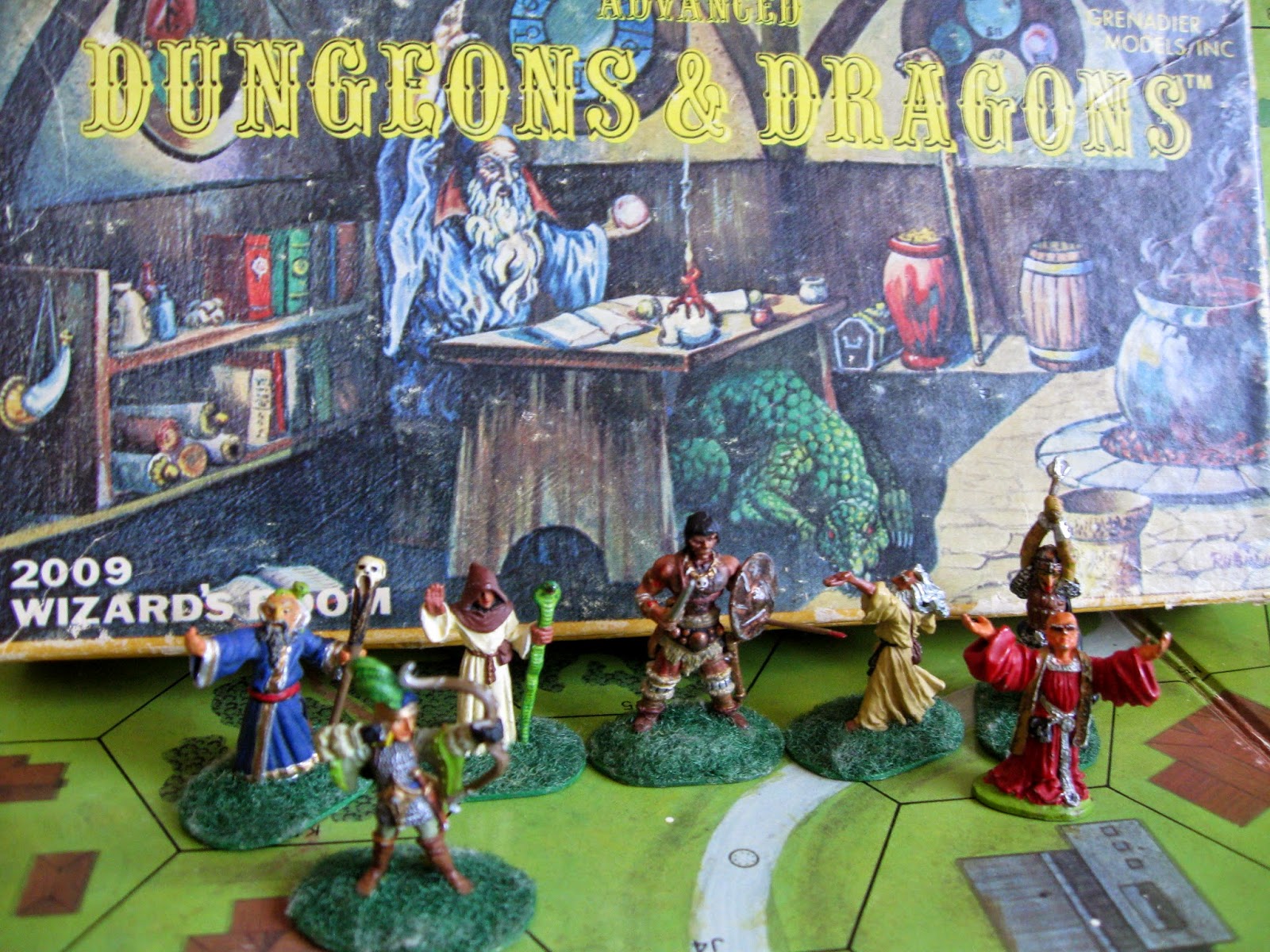 A few days before the event, I went digging into my trove of old D&D figurines.  I found my old box (nay: ancient, I should say) from Grenadier Models: “Wizards Room” Ref. #2009.  Its pieces had already been assembled in a diorama, which now sits in a larger box.  In the Grenadier’s box, instead, I’d stored original gaming pieces from my (AD&D 1st ed) campaign of 1982, thirty-year-old figurines with which I’d started my gaming hobby. 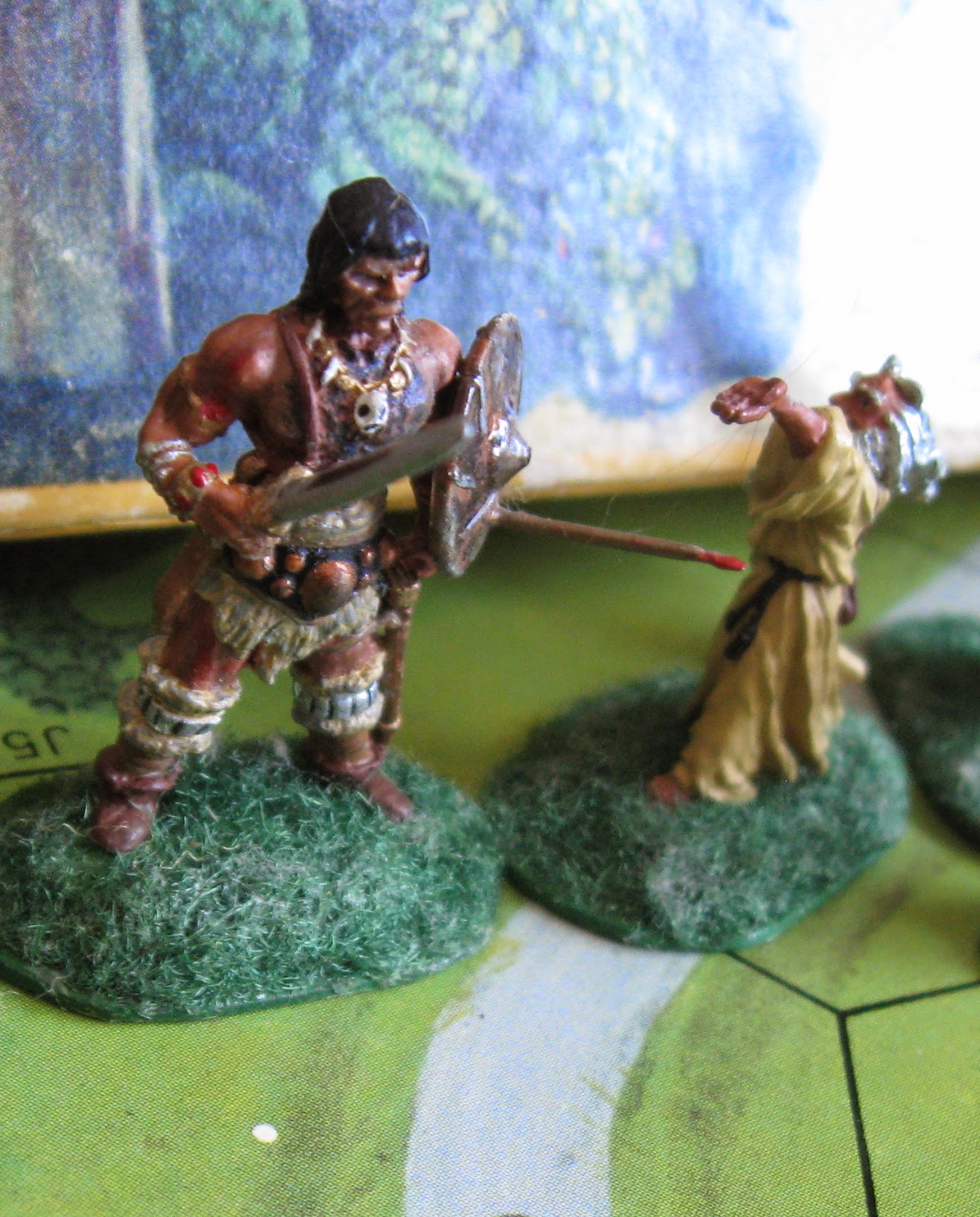 There they stayed, unused since the glacially cold February of 1983 when I came to TSR and found, much to my horror, that playing D&D with professional designers wasn’t as much fun as DMing gung-ho fans of the game.  Blasé and cynical attitudes replaced the good humor to which I’d become accustomed, and these few treasured relics of my past got buried into that small box for many long years, until now.  They would do fine as the player’s heroes.  The colossal and intimidating barbarian went to Wendy, so a few jokes quickly followed about the hairy "female" barbarian (she was pretty "butch," with battle rage and all.) 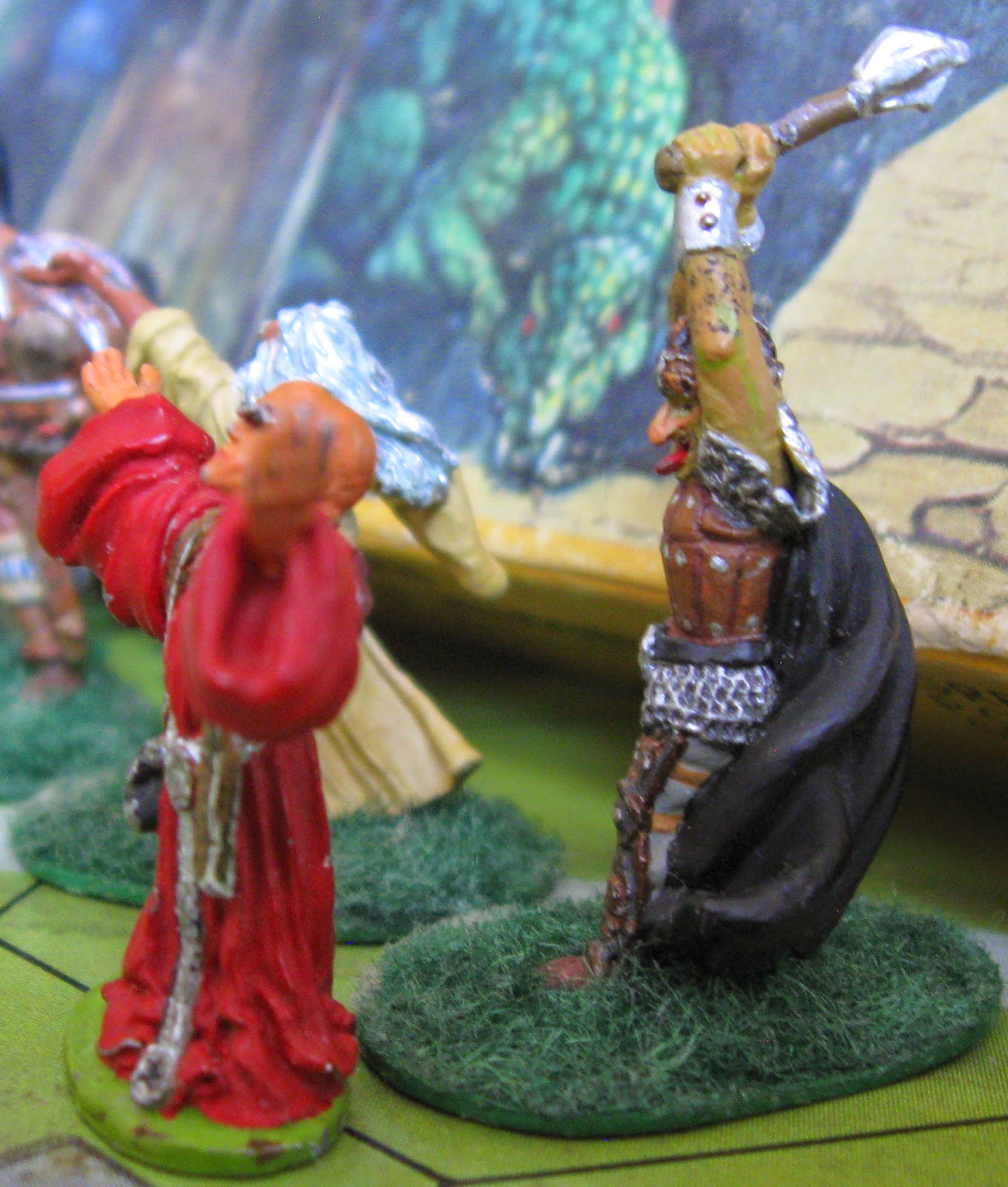 Frank and Mark got the two wizards.  The cleric imploring his spiritual patron’s goodwill found its way into the eager hands of the young fellow whose name* escapes me now, the watchful guardian of the party’s good health ironically named “Mort.”  My assassin-cleric became Janet’s magpie-minded thief, a figurine raising a mace and sticking out its tongue while preparing to conk someone over the head (I’m guessing).  I was still missing a heavy-duty, plate-mail-clad hero who would become Joy’s character.  A quick dash to Lake Geneva Games yielded the “tank” I was looking for, along with half a dozen extra d20s to make sure there would be enough dice for all. 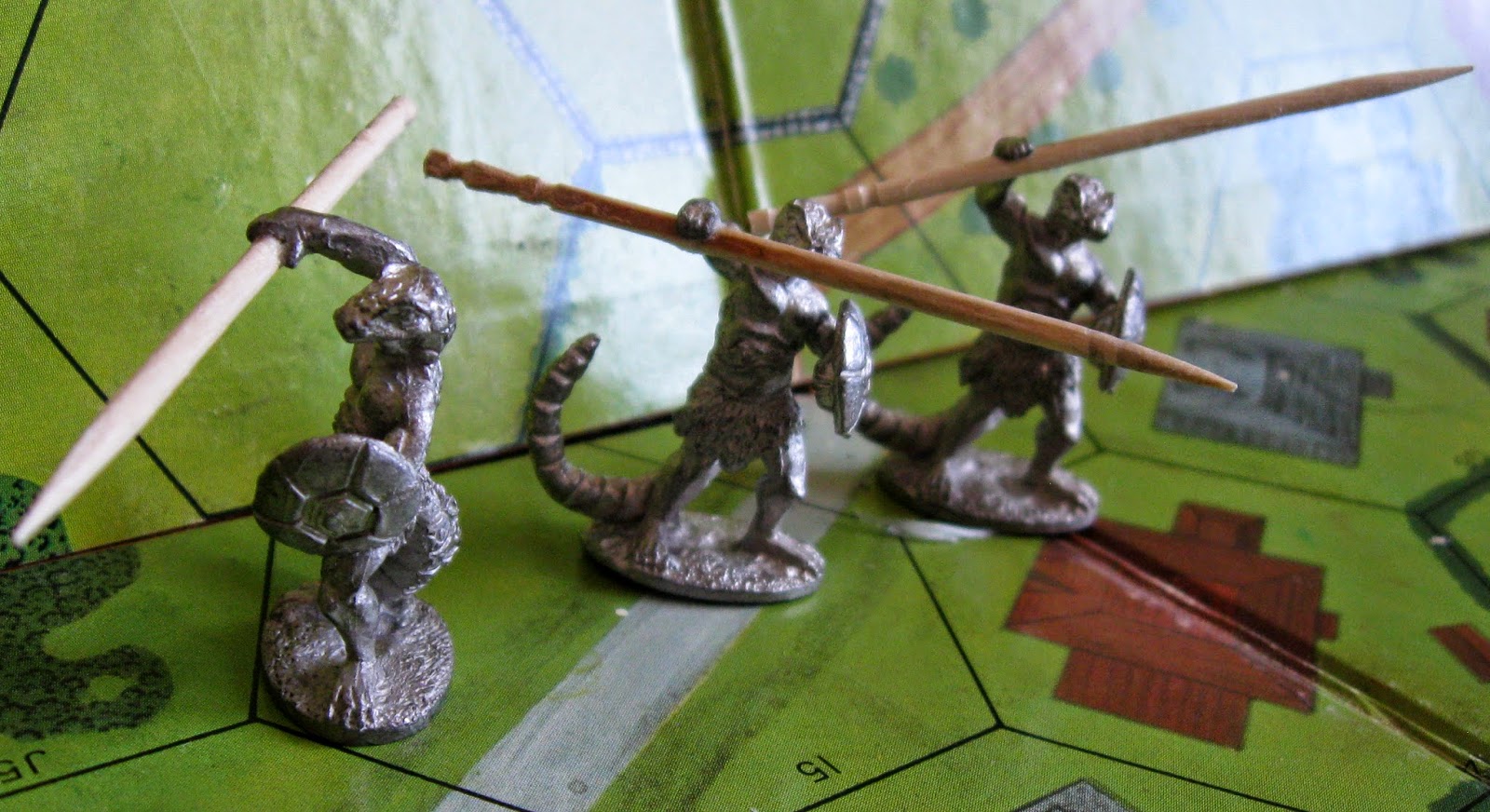 For the bad guys I raided a big box with a ton of unpainted minis from my time at TSR.  I’d inherited these after TSR ended their miniatures business in the mid-80s.  Of this, I selected a good dozen empty-handed lizardmen as ad-hoc stand-ins for the vipermen, some 30 goblins who could easily step in for fellfolk tribesmen, two pewter boars, two dire wolves, and an assortment of very cool figurines painted by the late Dave Sutherland. 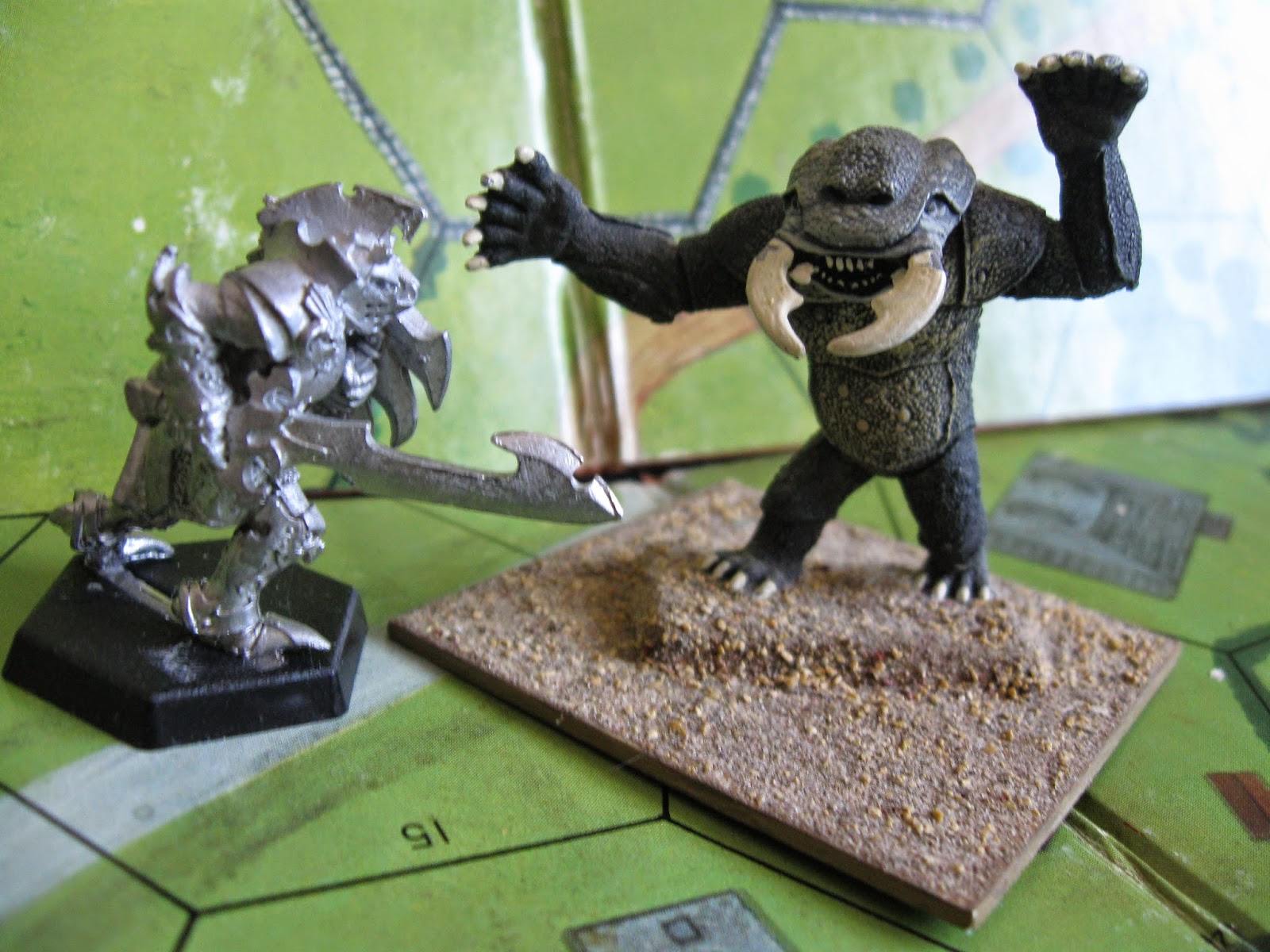 I can’t reveal what these last ones are, since this would be a major spoiler, except for the umber hulk—the dungeon’s first casualty when the party stumbled onto a back door into the dungeon.  In Basic D&D, that’s a “hulker” (borrowed from AC9 Creature Catalog—thankfully, it doesn’t have the AD&D version’s gaze of confusion).  The lizardmen’s empty hands bothered me because these critters were supposed to be brandishing weapons, lost many moons ago.  Wooden toothpicks and some judiciously-applied Gorilla glue fixed the problem PDQ, purveying the Draconic killers with nasty-looking spears.  All was ready a few hours before the demonstration.  Off we went.

(*) This was brave and mirthful Evan.


Fast Forward:  so here we are, darkness prevailing outside, the library almost deserted, the last few folks working there eying us with amused yet somewhat confused dubiousness.  I’m (mostly) standing behind the DM screen, while my players/collaborators/unsuspecting-victims are hard at work coming up with names for the pre-gens: Mort the health-minded cleric, Garram (aka wizardo numero uno), Knarf (aka wizardo numero dos), Burlingo (the tank with muffled voice behind the helmet), Valborg (the fur-clad hairy brute), and Taryk-Magpie (“are-there-any-shiny-stones-there?”) making it a point to stay “in character.”  The heroes, students at the Guild of Dragon Slayers, are sent on a mission as part of their mid-term test.  They catch a flight aboard the Talikai Cloud, a dwarven-built steam-powered paddleboat, and soon end up in the foothills of the Matai Nui, in search of a spot where a dragonship was rumored to have landed.  After disembarking, their native fellfolk guide, Puakala-One-Eye, leads them to the very place, and then refuses to go further.


Great.  Nobody argues.  The DM rubs his hands.


SPOILER ALERT—go no further if you plan on playing this when the adventure becomes available.


The voice of wisdom in the group, Mort suggests the thief goes out and scouts the area at the edge of the rainforest, a cliff bordered with boulders and rocky debris ("yeah, better her than us!")  Taryk, with an eye for shiny stuff, only finds an ominous arrow slit, 20ft up the cliff, halfway along the third ravine on the far right.  The sky is dark despite being only the middle of the afternoon.  Rain is pouring.  Thunder rolls and echoes against the wizened face of nearby Matai Nui.  She turns around and checks the middle ravine.  Rats!  Another arrow slit.  She moves to another on the left, a somber gorge with gnarled roots emerging from the rocky sides.  At the end lies a lake with muddy waters surrounded with cliffs.  It smells bad, but she doesn’t see any arrow slits overlooking the passage.  Huddled under a ledge, she pulls out her scroll of communication and sends a message to the party. 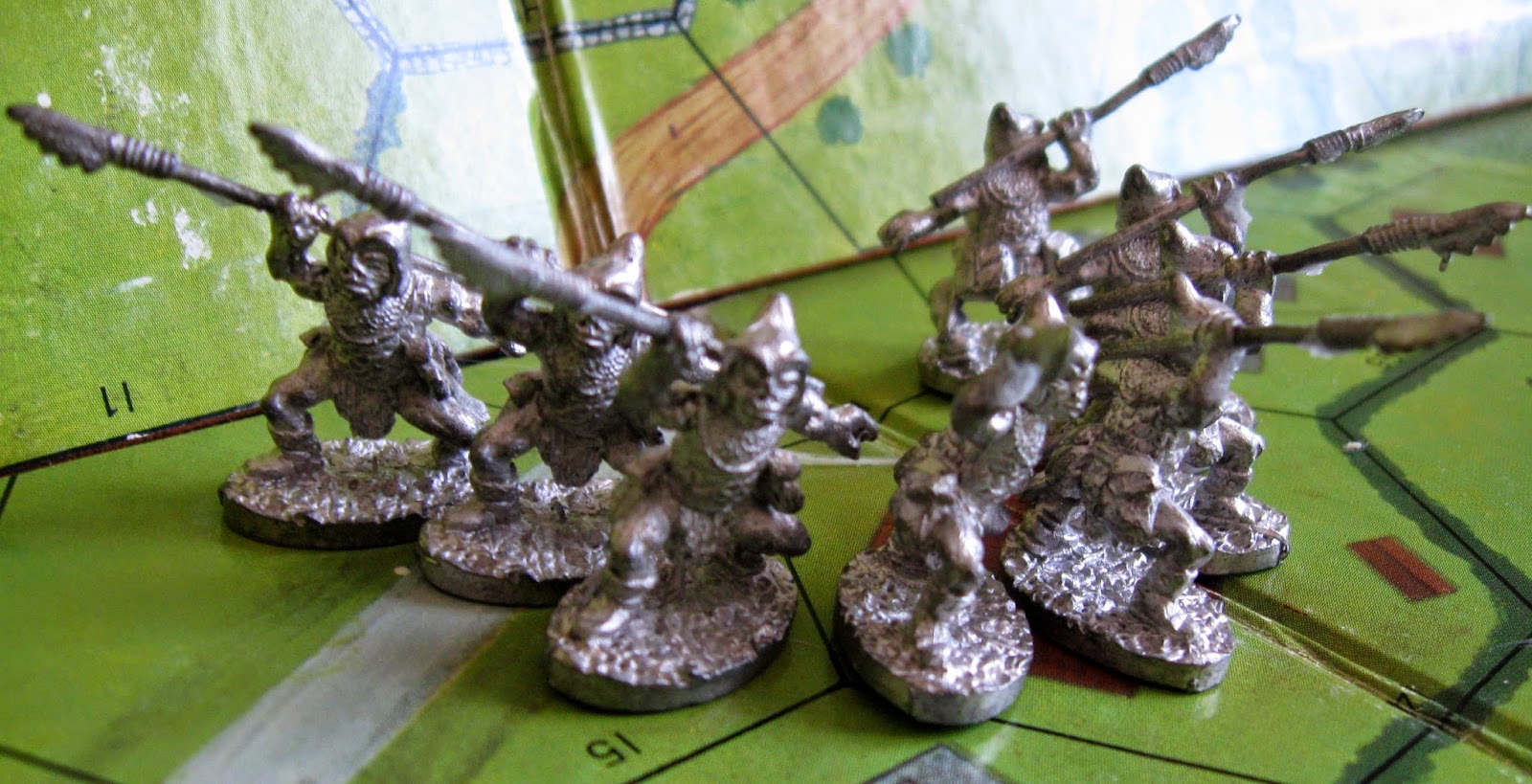 The fearless heroes boldly show up and wonder about that pond.  Two other beaches lie on the opposite ends.  Not wearing armor, Valborg decides to cross.  Something grabs her boots.  She kicks away and swims back.  Six zombies emerge behind her.  Mort raises his holy symbol (“Wait, I’ve never played a cleric before.  I can turn undead?  Hey, that's cool!)  The rotting dudes jump back whence they came and stay below.  After another suspicious glance at the muddy waters, the party turns around and decide to go for ravine #2.  Somewhere in the distance, the ominous sound of drums rises from the nearby jungle (well, the place is supposed to be taboo.)


There goes Taryk, discretely sneaking past the arrow slit.  No reaction.  Good.  She tiptoes ahead to another dead end.  But wait, she checks for traps there.  Lo and behold, there’s a secret panel in the rock face.  She peeks in: a dark and equally-bad-smelling tunnel lies there.  Better call the others.  Sure enough, if she made it this far—such child’s play, isn’t it?—the others can too.  Right?  Right? 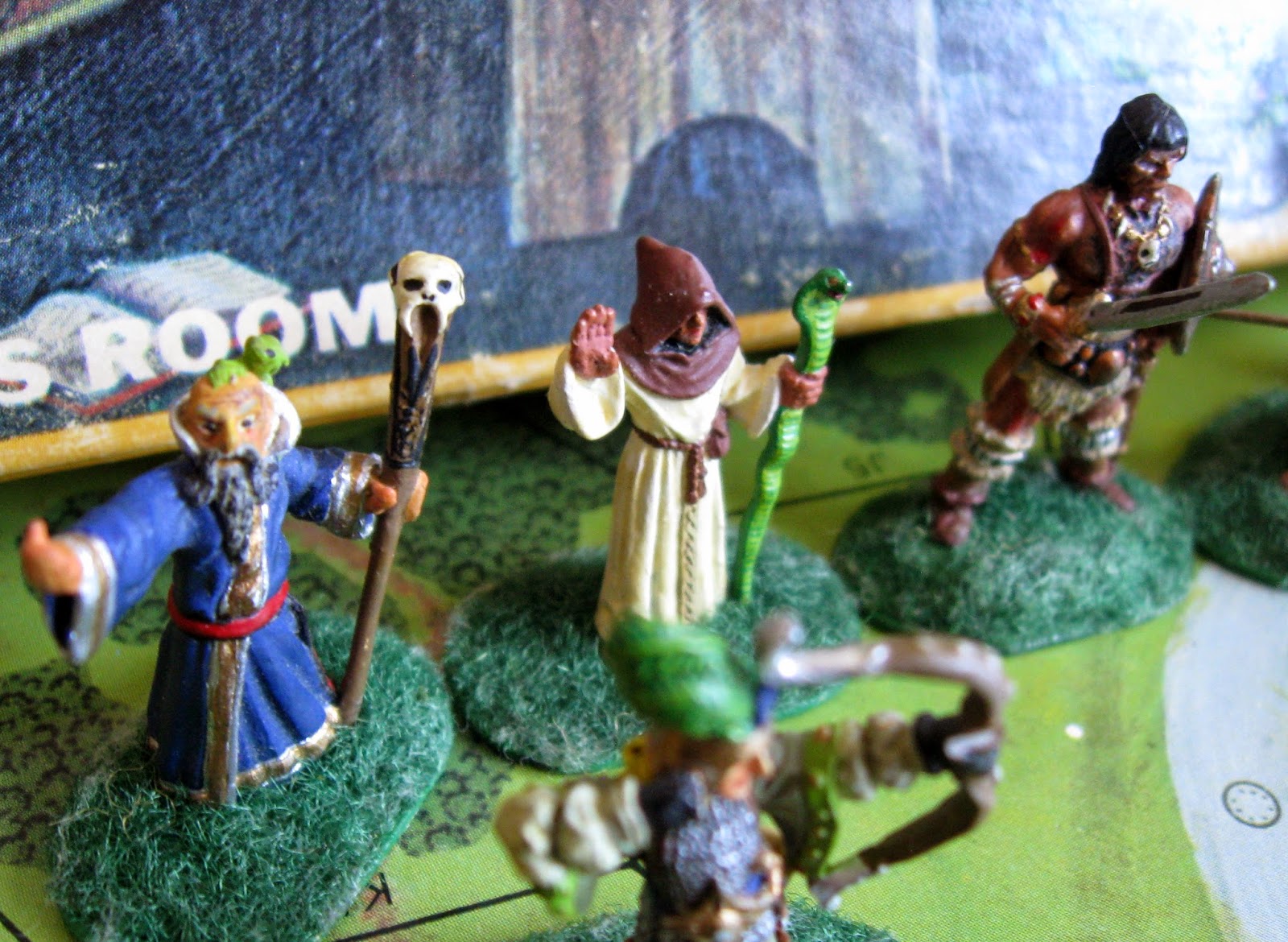 Here comes the troop, with Burlingo noisily clambering in the back. Garram and Knark look worryingly at the tall cliffs as gnarled roots slowly beckon them.  This time, someone behind that arrow slit saw something.  Thwack, zoom, thunk!  A large javelin narrowly misses Mort and digs deep into the ground next to him.  Everybody suddenly charges ahead, straight down the gorge.  Without waiting, they rush past awaiting Taryk, through the open secret passage. . . and block it open behind them before continuing deeper into the rock.


Down the dark passage they go, with not a wee little elf or crafty dwarf to see ahead.  Hmmm. . .


Me: “Judging from the sound of your boots echoing against distant surfaces, you reach what seems like a large cavern.  Sure is dark in there.  You see nothing at all.”


"Oh. . . yeah."  Mort lights up a torch.  There lies a big cave, with a recess on the left, a slope circling down past the right side, and a large pile of bones stacked in the middle, about 15’ ahead.  They include. . .


Well, folks, I won’t say more.  You wouldn’t want me to divulge everything about this adventure, would you now?  See you in February, if you dare (click on the events page for updates on the next session).
at 9:49 AM

Email ThisBlogThis!Share to TwitterShare to FacebookShare to Pinterest
Labels: Calidar, Dungeons and Dragons, Event, In Stranger Skies, Industry-Related, Voyages of the Princess Ark