CC1 Calidar "Beyond the Skies"

So, what am I up to these days? 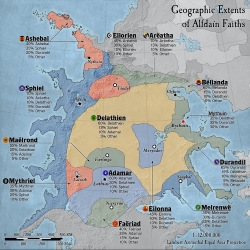 CAL2?  Not yet.  An adventure module?  Not quite yet either.  There’s been a lot of thinking about what is needed most at this point.  Several ideas came and went before I settled on the current project.  It is one that will cover a lot of ground, though once again the title refers to something hailing from the heavens.  It touches upon the people of Calidar, their histories, and the hearts of their cultures. I’m therefore pleased to announce the next title in the series expanding from the CAL1 "In Stranger Skies" core book:

I’ve let out the news that I was working on the gods of the Great Caldera, and have posted seven big blog articles as previews.  While the book gets fleshed out, this material will, of course, undergo further development and receive additional “meat.”  Certain details will also change to stay consistent with new ideas and directions.  In fact, a lot of extra content is forthcoming on this topic alone.  Other related concepts have emerged as well, making the whole genre of “spiritual patrons” and special powers a lot more substantial and broad-reaching.  This will affect how player characters are developed, and also provide additional dynamics to Calidar’s universe.


So, what does CC1 “Beyond the Skies” offer?  Here’s a general overview:


Introduction:  The essential information here is how the gods are organized in this book, the logic behind the concept of “pantheons,” and the relation between mortal followers and the world beyond.  CC1, like CAL1, remains non game specific.  Part of this introductory material addresses general terms and concepts which will be used to describe game abilities in this book.


Each pantheon is a chapter of its own, sorted by realm (Alfdaín, Araldûr, Belledor, etc.), for a total of 10 chapters including separate treatments for Ellyrion and Narwan.  Those two will focus on different aspects of Soltan, bringing to life notorious heralds and scions for the first, and greater djinns for the other.  The list below gives a tentative overview of how these chapters will be organized (subject to change, of course, as everything gets fleshed out).


1. Pantheon Overview
2. Pantheon Ruler (with holy symbol art)
3. Other Gods: Repeat 2A to 2B for each pantheon member in alphabetical order (gods, demigods, notorious heralds, epic heroes/villains, and/or fantastic monsters as needed).


Chapter 11 Rewards & Obligations
Chapter 12 Calidar’s World Soul
Chapter 13 Divine Trappings
Appendix: Gods of Ghüle—an overview giving useful information about their nature, origins, motivations, strategies, and present connections within the Calderan pantheons.  These divinities aren’t going to be individually described here since this book focuses on the gods of the Great Caldera.  A gazetteer about Ghüle should be expected in the future, and it will detail all of them using CC1’s format as much as possible.  Add to this section a comprehensive index (CAL1 & CC1).


What’s the timetable on this?


I plan on finishing most of the writing before launching a Kickstarter.  Crowd funding will be necessary to commission new art.  Since a good portion of the writing has already been accomplished, I’m hoping to reach this stage by late spring/early summer. [[Edit: due to the sheer size of the book, writing actually ended in October.  Sorry for the delay.  One the good news is that the books offer a great deal more than originally planned.]]  I’ll keep everyone updated.  The very first target for crowd funding will be for the cover art.  If we exceed the initial funding goal, then internal illustrations are next, along with all other production costs.  Depending on the extent of the project’s success, the most important gods should receive an illustration or, ideally, the majority of them.  Barring any unforeseen disasters, Thorfinn Tait will stand behind maps and diagrams (of which there ought to be plenty) as well as the book’s layout/graphic design.  The final page count will depend on funding and art contents.

Edit: I'll add sections of narrative in most chapters, very much in the style of the GAZ3 Gazetteer:  Principalities of Glantri, to bring even more life and color into the book and some added background.


In order to help with this, please start passing the word around.  Comments in public game forums, personal chats with buddies, discussions on the Piazza, on Facebook, or Google+, posting nuggets on blogs, and so on, running games at conventions, can go a long way toward getting people excited and eager to support this upcoming Kickstarter so everyone benefits.  Please, don’t shy!  Remember I’m not a major publishing house.  I do many things on my own, and any help will be greatly appreciated.

Email ThisBlogThis!Share to TwitterShare to FacebookShare to Pinterest
Labels: Beyond the Skies, Calidar, Industry-Related, Kickstarter, Voyages of the Princess Ark