It's been a while now since I started drafting floor plans and skyship deck maps for Calidar. Looking back several years, I shudder at my earlier efforts, but then everyone has to start somewhere and learn the tools of the trade, right? Though I wouldn't compare my work to truly professional endeavors, I'm going to show some of the steps I go through to create floor plans these days. Hopefully, this might give some ideas on how to proceed, or spark a discussion from which I might learn new useful bits.

People have been asking me what software I use. Though the answer seems easy, it is misleading. I use Paint.net, a freeware application that's been growing over the past several years. I gave up on Photoshop way back after being overwhelmed by its complexity. Since then, I got used to Paint.Net and remain leery of the learning curve to switch to Photoshop or anything else. There are specialized "dungeon" mapping programs out there. I found them either too limited or in some cases unmanageable. I know people out there will disagree with me on this, but that's just my opinion.

That being said, the answer above hardly covers the subject. In order to draft the sort of floor plans I've been coming up with lately, there are two other key components: years of hands-on user experience, plus lots of stock art and background textures purchased from specialized sites. I rely mostly on Dreamstime as a source of illos and graphic textures. Costwise, over the years, this does add up. Another factor is the amount of time needed to draft a snazzy map. The one I'll talk about in this article took me about 3 days (more than full time), from concept doodles to final corrections, and this does not include "stocking the dungeon"  (adding furniture and other details aside from doors and windows). From a technical aspect, the final document includes 20-30 layers showing the various elements of the map. I usually work at 300 or 600 dpi resolution. Oh yes, and a fast computer with lots of memory will also help prevent long waits for every step of the way. 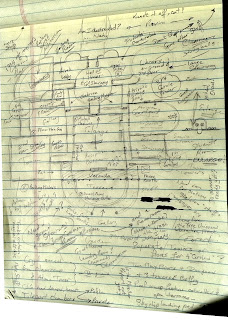 The first step is the concept work. Basically, grab a sheet of paper and sketch out a very rough layout. As you can see on the adjacent shot, lots of things cross my mind as I throw in various shapes, erase others, and append new details. One generally leads to another, and pretty soon, space on that sheet comes at a premium. Of course, I could think of lots of things to include. Just to make sure I wasn't missing anything important, I turned to social media and probed the friendly hive mind there for other ideas. And, whoa... I got lots more. So, thank you everyone for your help. I promptly turned around and made a complete list of what had come up on social media, and split all these entries according to which floor each should be located on. That's just so I don't forget anything, since the entire project is likely to take weeks, from the dungeon level to the tippity-top of the highest tower. Occasionally and well after the brain-storming has effectively ended, someone surreptitiously adds an idea I can't possibly resist including somewhere, somehow... Click on the adjacent shot to get a closer look. 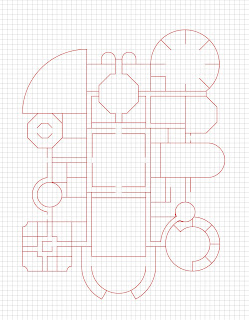 Now the "real" work begins. I find it easier to draw simple lines to render the general ideas depicted on the hand-drawn sketch. Many corrections and redesigns occur at this stage. (You can trust me when I say there will be many more, kicking yourself repeatedly for not having foreseen them earlier; those will require a lot more work). That's already five layers--from front to back: 1. page frame which isn't shown here, 2. labels, 3. outlines, 4. grid, 5. white background. The page frame is to make sure nothing sticks out in the margins which may be chopped off during printing; this won't matter if you are designing a map for yourself. That's when you realize everything needs to be recentered, including the grid, something that you complete very, very carefully, right down to the single pixel, as an error at this stage will be tough and time consuming to fix later. Patience is a virtue here. 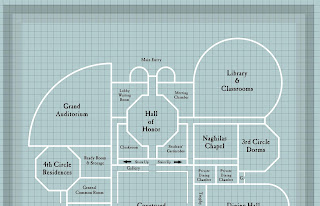 Simple lines may be okay for your personal use. For something a bit more involved, the lines need to be turned into something that actually looks like walls. For this, the original line art needs to be thickened. Depending on the application, this may be a trivial issue. On Paint.Net, this entails adding extra outlines to the original drawing, which takes just a few seconds. 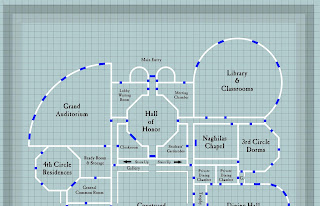 The game plan is to eventually add a black edge around the white outline, but before this can be done correctly, the walls need spaces added for doors and windows. The easiest way I found to make sure these spaces are all exactly the same sizes involves a temporary layer on which I cut/paste blue blocks. Once done, it's easy to select all the blue elements, move down to the white outlines layer, and hit delete. 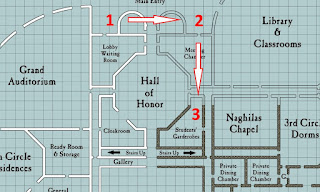 Once done, remove the layer with the blue blocks, since it's of no further use. Then add the black edges to the white outlines (1). I'm assuming most graphic programs can switch off white, which leaves just the black lines (2). That's a useful trick, because now I can select the inside of the black lines, move down to a new layer (3), and paste/fill the selected space with a stone texture of some kind. 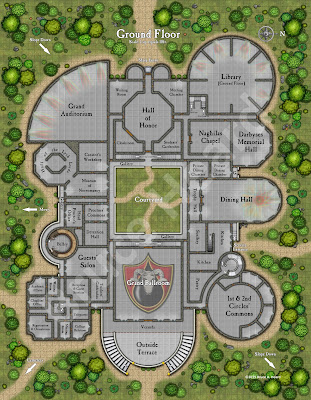 And there you have it: walls that looks like walls. Many more steps will follow, such as adding windows, doors, and wall shadows (do the latter on a separate layer, because otherwise corrections at a later time will become problematic). Fancy tiles come next to cover the indoor floors, plus ground textures outside the buildings. With a bit of testing, resize the tiles so they match the original grid exactly. Move up the tiles layer "above" the grid, so as to mask it within indoors areas. The original grid can still be seen outside the building. I often hide the grid beneath trees.

I like to erase wall shadows where windows are likely letting light in. A gray layer can be inserted above indoor areas to darken the rooms; then, erase the part of the gray layer in the general vicinity of these windows, which enhances the impression of light. Set the eraser at its maximum softness so the effect is barely perceptible. The result shows in this near final version of the floor plan (see just above). 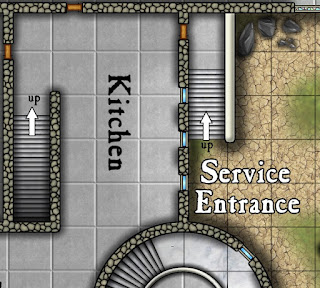 Stairs can be pretty snarly. The first challenge is to scale them correctly, assuming each step measures 7"-8" high -- therefore, figure approx. how many steps are needed to reach the next floor. The other problem is their width: on the map above, normal steps are intended to be about a foot across, and thus they look tiny (1 grid square = 10ft.) Yes, I can be OCD about this kind of detail. Each step in the stairs at the bottom of the map, by the open terrace, would therefore be several feet across, producing a very gentle rise. 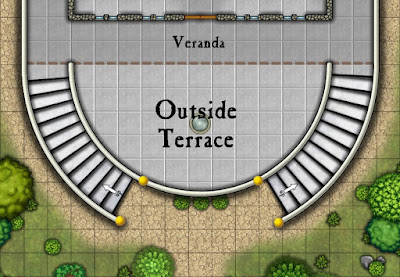 Compare with the stairways straddling the courtyard (rising at a 35- to 45-degree angle). In a modern house, stairs might require around 18 steps to reach the next floor -- in a palace, there could be twice as many, especially if the angle of the stairs is more gentle. There are various ways to represent stairs. Most folks will stylize them and not worry one bit about accuracy. After all, what's really needed in a game is just the information that "there be stairs here, up or down." I place an arrow showing which way is up. Being detail oriented, I also place shadows to help visualize the steps. It's actually pretty easy. I just recopy onto another layer the lines marking the edges of the stairs, shift them just a tad, and then blur these lines so they look like shadows; reducing the layer's opacity a bit can help here. A gradient darkening the bottom of the stairs is another useful tool.

I guess I'm done rambling along. Hope you found something useful. Have a nice weekend!
at 11:04 AM

Email ThisBlogThis!Share to TwitterShare to FacebookShare to Pinterest
Labels: Calidar, cartography, Dungeons and Dragons, Industry-Related, On Wings of Darkness